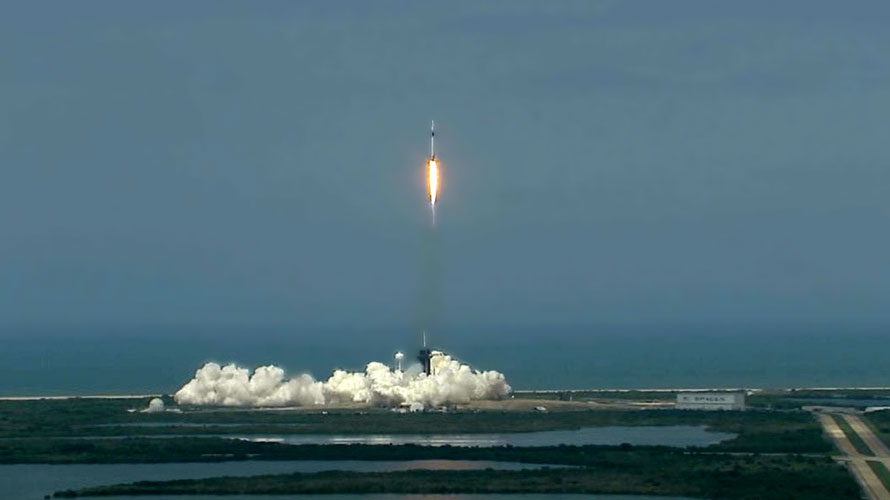 “Taking more and more passengers out into space will enable them, and us, to look both outwards and back but with a fresh perspective in both directions.” — Steven Hawking

On May 30, 2020 at 3:22 p.m. EDT, a SpaceX commercially owned Crew Dragon spacecraft lifted off from Kennedy Space Center Launch Complex 39A (LC-39A). This historic launch is the first time a private entity was employed to carry NASA astronauts to orbit. Aboard are astronauts Robert L. Behnken and Douglas G. Hurley. The spacecraft was inserted into a nominal, coplanar orbit with the International Space Station (ISS). A series of phase and boost burns will occur to align the Crew Dragon orbit with ISS for docking approximately 19 hours from launch. Additionally, the first stage did a flip and boost back burn allowing it to land on the drone ship, Of Course I Still Love You.

Crew Dragon Demo-2 (DM-2) marks the transition to the Commercial Crew program for providing NASA astronauts launch services to the ISS and Low Earth Orbit (LEO). It is also the first crewed spaceflight in nine (9) years to launch American astronauts on American rockets from American soil.

With the liftoff of DM-2, a new era in space flight has begun based on commercial and government partnerships. This is evidenced by programs such as the Commercial Lunar Payload Services (CLPS), Artemis Lunar Lander, and Gateway Power Propulsion module. Commercial spaceflight is also an enabler of private missions independent of NASA.

SpaceX leases LC-39A from NASA and has modified the pad for Falcon 9 and Falcon Heavy launches. The pad is also intended to support Starship/Superheavy in the future. LC-39A was built as part of the Apollo program and was used for the majority of Apollo missions, including Apollo 11. LC-39A was later reconfigured for the Space Shuttle for the first flight of Columbia STS-1 in 1981. In total LC-39A supported one-hundred and thirty-five (135) Space Shuttle missions including the last, Atlantis STS-135 on July 8, 2011, ending the era. Demo 2 Commander Douglas G. Hurley served as Pilot on STS-135, forming a living link between two epochs of American crewed spaceflight.