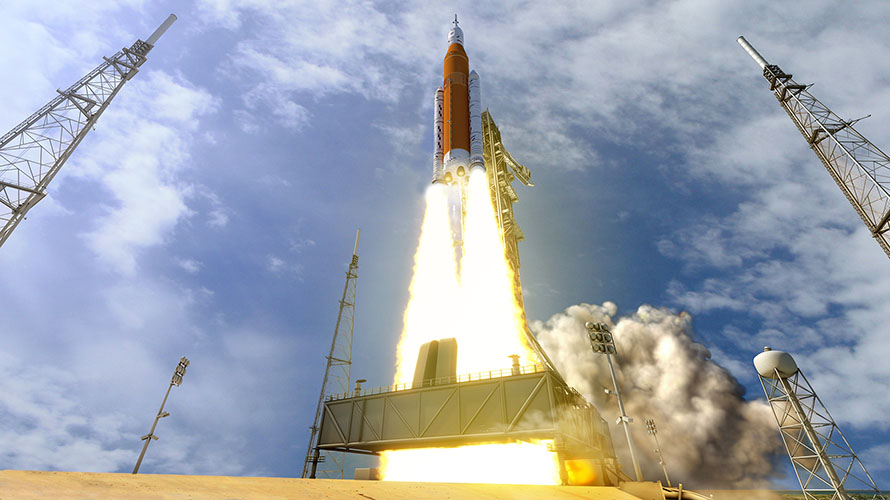 Matisak outlined the outlook and accomplishments for the build of the Artemis I, II, III, and IV missions; however, he focused on getting Artemis I to the pad before the end of the year. Matisak characterized the SLS Block 1 as “the game-changing rocket for the future,” “the foundational asset for the program,” and beneficial to “the nation in terms of space exploration.”

Matisak detailed the SLS Block I as having 322-feet of height, six-million pounds, 8.8-million pounds of thrust, and 27 tons of payload for translunar injection. Matisak depicted twin boosters (75% of the total SLS thrust for two minutes at launch), four-RS-25 engines (greater than 2 million pounds of combined thrust for an eight-minute climb to space), core stage (contains liquid hydrogen and liquid oxygen propellant tanks), upper stage (RL10 engine for in-space propulsion), and adapters. He showed SLS Blocks 1, 1B, and 2 for crew and cargo and compared the “unique capabilities” of the SLS to other space vehicles for volume, mass, and departure energy.

Matisak included the role of simulation in this program. Recounting standard and unique strategies for testing, he emphasized testing gives confidence that the design is “good to fly.” He explained that they always test the solid rocket boosters before they are flown, and the last solid-booster test was completed. He continued that the Green Run test series has eight tests for the core stage, the Integrated Test and Checkout are performed prior to T-0, the Interim Cryogenic Propulsion Stage has been stacked, and they are waiting on the Orion stage adapter, which will be uniquely tested up to the wet dry run. He spoke about the integration of secondary payloads.

Matisak said efficient strategies (e.g., tests are performed as the rocket is stacked) were applied for the schedule at Kennedy Space Center (KSC). Footage was shown of the engines performing as designed, and of heavy lift day in the vehicle assembly building High Bay area. He offered a “hats off” to the team for getting the core stage between the boosters on heavy lift day and kudos to the KSC’s exploration ground system guys for the different High Bay platform configuration.

“To get across the finish line together,” Matisak imparted that this leadership team prioritizes that this is the first flight and finds SLS solutions together. Matisak deftly described the key factors of future Artemis missions and illuminated the progression of “and benefit to be gained with” the SLS.