Icebergs Ahead: The 1970 Letter That Predicted NASA’s Future in Human Spaceflight 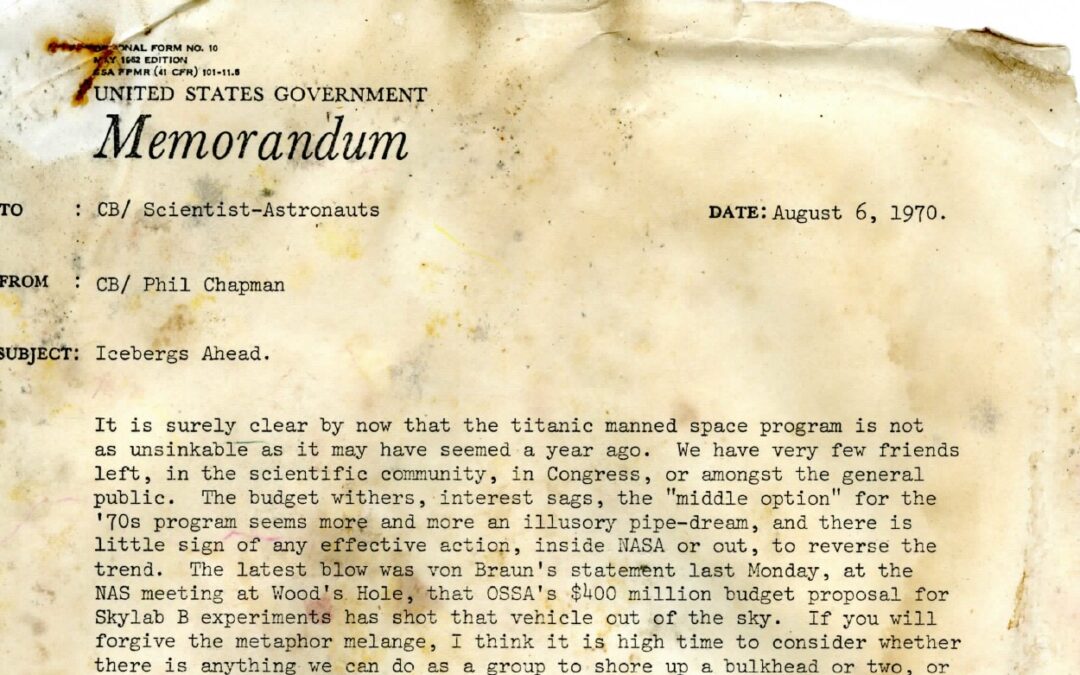 By 1970, budget cuts were forcing NASA to cancel Apollos 18, 19, and 20, and lunar landing sites and scientific priorities were being reshuffled into other missions. In addition, the first Apollo Applications Program space station, by now christened Skylab, would be pushed out to launch in 1973. The U.S. space agency would soon put much of its resources concerning human spaceflight into what would become the Space Transportation System, or what’s better known as the Space Shuttle, which carried the promise of cheap costs per pound into space, and would make spaceflight as routine as commercial airline flights…except when it didn’t. That program, as we now know, was so complex it wouldn’t make it off the ground until 1981. One victim of the nascent Shuttle program was Skylab B, which, too, would be canceled, along with Skylab crewed flights past the third mission. 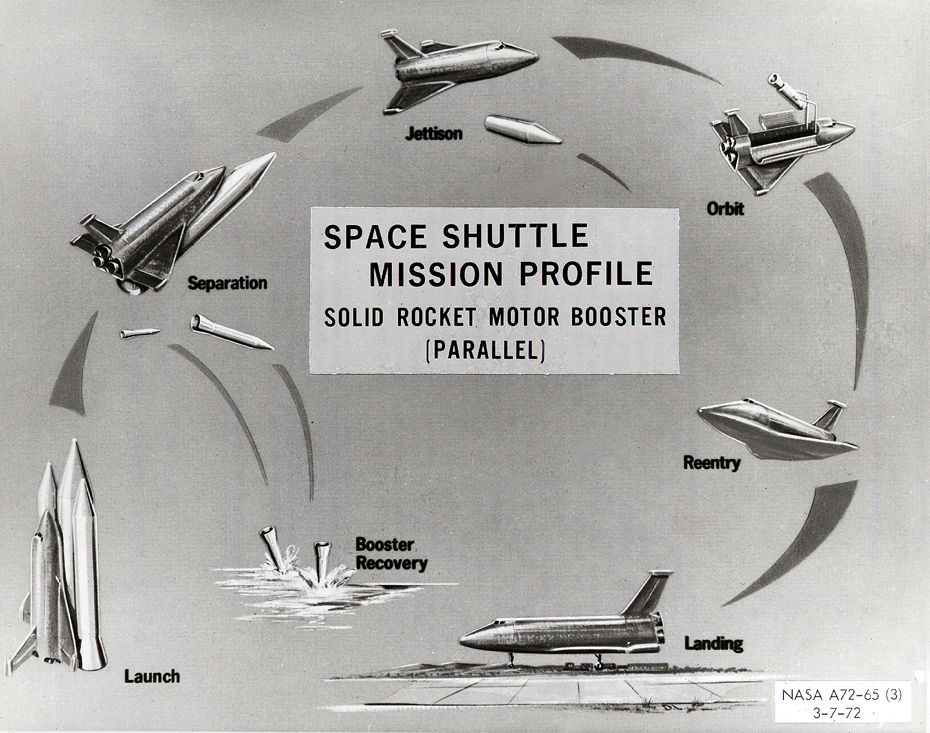 This early chart shows the use of two parallel Solid Rocket Boosters in conjunction with three main engines to launch the proposed Space Shuttle to orbit. NASA/MSFC image accessed via http://www.esa.int/Science_Exploration/Human_and_Robotic_Exploration/Space_Shuttle/Space_Shuttle_timeline

While this chain of events wouldn’t fully unfold until 1973, one astronaut saw the proverbial writing on the wall, and made a valiant attempt to address it. A recently unveiled letter from then-astronaut Dr. Philip Chapman to his fellow astronaut-scientists revealed, in his own words, his frustration with NASA’s lack of a post-Apollo vision, and how NASA was losing its ability to promote its vision – any vision – and hold the public’s interest in spaceflight. Dated August 6, 1970, and typewritten on coffee-stained, aged U.S. Government memorandum paper, this letter was discovered in Dr. William Thornton’s papers, which are accessible via the University of Texas Medical Branch’s Moody Medical Library online. It looks almost as if the letter’s recipient tried to hide its bluntly-worded contents discreetly behind a water cooler.

Chapman’s epistle is entitled “Icebergs Ahead,” and used the 1912 sinking of the Titanic as a metaphor for the then-current state of the space program. Chapman wrote:

It is surely clear by now that the titanic manned space program is not as unsinkable as it may have seemed a year ago. We have very few friends left, in the scientific community, in Congress, or amongst the general public. The budget withers, interest sags, the “middle option” for the ‘70s program seems more and more an illusory pipe-dream, and there is little sign of any effective action, inside NASA or out, to reverse the trend. The latest blow was [Wernher] von Braun’s statement last Monday, at the NAS meeting at Wood’s Hole, that OSSA’s $400 million budget proposal for Skylab B experiments has shot that vehicle out of the sky. If you will forgive the metaphor mélange, I think it is high time to consider whether there is anything we can do as a group to shore up a bulkhead or two, or whether we should be prepared merely to come to attention on deck as the ship founders beneath us.

Moreover, Chapman doesn’t shy away from addressing areas that he believed were holding NASA back from a prosperous post-Apollo future:

I would indict NASA on at least the following counts:

1) Failure to spread understanding of the importance of the program. We have relied on spectaculars and the space race, both of which are ineffective now – everything is anticlimax after Apollo 11, and the Russians are (seemingly) out of the running. What we are doing will be remembered when Vietnam and even the whole communist-capitalist struggle are as dusty as the Peloponnesian Wars, but there is little public awareness of what a remarkable thing it is to be living now.

2) Failure to develop a coherent and imaginative plan for what we are trying to do in space in the ‘70s. Planning for new generations of vehicles is generally fairly well done, but there is no strong central authority accepting responsibility for what we will do once in orbit. The nation will clearly no longer accept getting into space as an end in itself and there will be no program unless we exhibit a total commitment to truly significant and cost-effective work in space in science and applications.

Chapman also identified “[failure] to adapt managerial policies that were effective during the massive, time-critical phase of Apollo, when cost effectiveness was subordinate to getting the job done, to the realities of the operational and utilitarian program of this decade.” He used the then-developing Skylab program as an example. In this letter, he predicted – more than once – that Skylab B, which would be his (and other astronaut-scientists’) chance at a ride into space during the 1970s, would be all but consigned to a scrap heap.

Skylab B wasn’t consigned to a scrap heap, but it would end up as a display inside the Smithsonian Air & Space Museum in Washington, D.C., never having gone anywhere near space. Chapman, who died on April 5th this year at age 86, would later state in Colin Burgess’ book Shattered Dreams, “The Skylab in which I had hoped to live is now a tourist attraction…I sometimes visit it when I am in Washington, but it is very sad to see it wasted.” NASA’s commitment to the Shuttle program along with the Skylab B cancellation cemented Chapman’s decision to resign his NASA post in July 1972. No astronaut from his group would fly until late 1982, when Joe Allen and Bill Lenoir would fly on STS-5. Chapman wouldn’t be the last astronaut-scientist from the 1967 “Excess Eleven” group to resign his post; in September 1973, Donald Holmquest would too leave the fray (Anthony England had departed in 1972 to work with the U.S. Geological Survey, but magically was allowed to return in 1979, and even made one Shuttle flight).

The remaining Skylab space station would house only three astronaut-scientists from the 1965 astronaut group during its 1973 to ‘74 prime. The only crewed spaceflight following Skylab’s three missions was the Apollo-Soyuz Test Project, which marked Apollo’s swansong in July 1975. Whether his viewpoints were appreciated or not, Chapman’s predictions concerning NASA’s human spaceflight program during the 1970s, circa 1970, turned out to be correct.

Maybe it’s best if we end this piece with Chapman’s own words from August 1970, a time when he began to realize his opportunities to make a spaceflight would likely not become a reality until well into the 1980s:

The basic message I am trying to put across here is a call to action in defense of the program, and I would certainly welcome any suggestions for other things we might do. Phil

The full letter is accessible via this link.