In Which We See Paul Weitz Claim A Dubious Spaceflight Record, And Then We See It Promptly Snatched Away By His Former Boss: 1974 AvWeek Edition

One of the most curious spaceflight “feuds” emerged in the spring of 1974, and it played out in the pages of Aviation Week & Space Technology. Unearthed by Mike Poliszuk in the Facebook group Apollo Spacecraft History, we see a tense dynamic emerge between a quiet, yet determined mission pilot and a salty veteran commander keen to defend his space “record” at any cost.
I will let the screenshots from AvWeek explain themselves; please click on the images to enlarge as needed. Here we see a short vignette from the magazine’s Washington staff in the March 18th issue, entitled “Star Streak”:

Sadly, Weitz was only able to hold on to his record for two months, perhaps even less. He was unceremoniously thrown under the bus by his Skylab 2 commander, Pete Conrad, in a letter to the editor published in the May 27th edition: 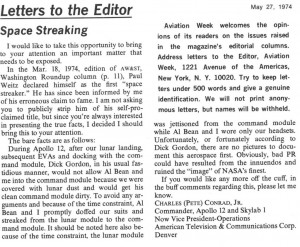 My favorite part is the end of the letter, in which Conrad appeals to the editors asking them if they required further clarification, “please let me know.” I have a sick image of them ordering a junior reporter to cold call Pete, and ask him for more information about this whole nudity in space thing.
This may be the greatest thing I’ve seen shared on Facebook in a very long time.