The National Space Society announces that NBC space news correspondent Jay Barbree is the winner of its 2015 Space Pioneer Award for mass media. This award will be presented at the National Space Society’s 2015 International Space Development Conference (isdc2015.nss.org). This will be the 34th ISDC and will be held in Toronto, Canada, at the Hyatt Regency Toronto (downtown). The conference will run from May 20-24, 2015. 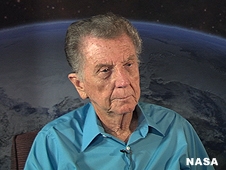 Jay Barbree is a reporter, correspondent, and writer. He began reporting on space issues just after Sputnik in 1957. He paid his own way to Cape Canaveral to observe the ill-fated launch of Vanguard 1. On July 21, 1958, he began work for NBC, where he still works today. Barbree is the only reporter to have attended every single manned launch in the USA, from Alan Shepard in 1961 to the final Space Shuttle flight in 2011. He is also the author or co-author of eight books, the latest of which is Neil Armstrong (2014). Barbree’s exemplary, fact-based reporting has helped the public and the space community better understand our space program.