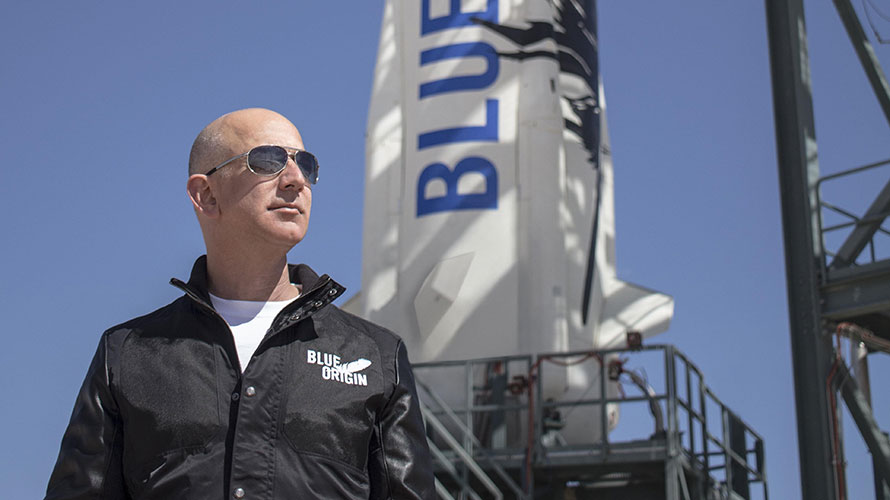 The National Space Society has named Jeff Bezos its 2018 recipient of the prestigious Gerard K. O’Neill Memorial Award for Space Settlement Advocacy to be awarded at the Society’s yearly conference in May 2018.

“Jeff Bezos has articulated exactly what our thousands of supporters work toward at the National Space Society,” said Mark Hopkins, Chairman of the NSS Executive Committee. “Few have done so much to advance space development and this award recognizes Bezos’ extraordinary advocacy and record of accomplishment.”

Bezos is the Founder and CEO of Amazon, as well as the Founder of aerospace company Blue Origin. Blue Origin is focused on building reusable launch systems to lower the cost of access to space. New Shepard, named after Alan Shepard, will take astronauts to the edge of space on a thrilling 11-minute flight. New Glenn, named after John Glenn, will be capable of taking people and large payloads to earth orbit and beyond. Blue Origin is also developing liquid rocket engines.

Bruce Pittman, NSS Chief Operating Officer, said, “As the founder of space development company Blue Origin, Jeff Bezos has both advanced and accelerated our progress and has been a tireless advocate for new and innovative approaches. As such, he personifies the very best in the field of space development and joins a distinguished list of previous recipients.”

The award will be presented to Jeff Bezos on Friday, May 25 at the NSS’s 37th annual International Space Development Conference® (ISDC®) in Los Angeles. The conference runs from May 24-27 and features leaders from space science, engineering, advocacy and government fields who are developing new ways to develop, live and prosper in space and on other worlds.

The Gerard K. O’Neill Memorial Award is given at infrequent intervals to exceptional individuals, and has in the past recognized such leaders in space exploration and development as physicist Freeman Dyson and Apollo 17 astronaut and geologist Harrison Schmitt. The granting of the award to Jeff Bezos continues this tradition of recognizing exemplary achievement.