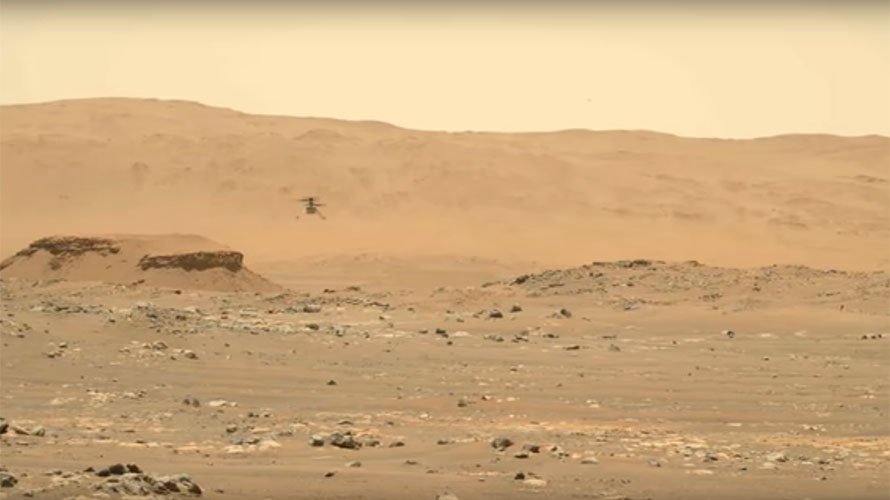 The National Space Society will honor the NASA/Jet Propulsion Laboratory’s Mars Helicopter Team with the NSS Space Pioneer Award at the 2022 International Space Development Conference® (ISDC®). The conference runs from May 27-29 at the Hyatt Regency Crystal City in Arlington, VA.

The annual Space Pioneer awards recognize those individuals and teams whose accomplishments have helped to open the space frontier, and who have made significant contributions in different fields of endeavor to develop a spacefaring civilization that will establish communities beyond the Earth.

“The Mars Helicopter Ingenuity has unleashed the power of low-altitude aerial exploration of Mars,” said Anita Gale, CEO of the National Space Society. “Low-flying, persistent aircraft provide an important ‘look-ahead’ capability for rovers, allowing them to both find objects of intense interest and to avoid dangerous terrain. NSS lauds the Ingenuity team for their pioneering work in this area.”

The Mars Helicopter began as a small, experimental concept at JPL, but after much challenging work in design and testing, became a late addition to the Perseverance Mars rover. The final iteration was completed in just under a year and mounted to the underside of the rover shortly before flight. After landing, Ingenuity detached and began a series of ever-longer and more complex flights, operating completely independent of the rover except for radio communications. Originally intended as a proof-of-concept engineering experiment, with just 5 flights scheduled, Ingenuity has flown 27 times, steadily increasing its altitude, duration, and distance. It has even performed reconnaissance for the rover, scouting the path ahead.

The award ceremony will kick off the conference at 8:30 a.m. on the morning of Friday, May 27. Upon the awarding of the Space Pioneer Award to JPL’s Jaakko Karras, the Chief Engineer for the Mars Helicopter program, Karras will give a short presentation. He will be accepting the award for the entire Ingenuity team.

For more information and registration for the 2022 International Space Development Conference, see the ISDC 2022 website.