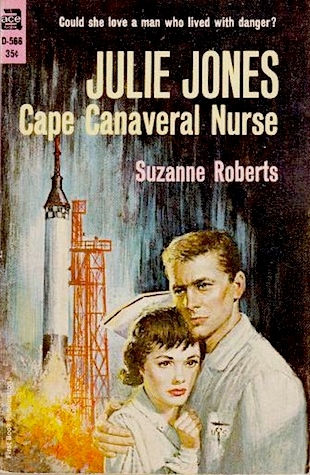 Could you love a man who lived with danger? Read on.
At the ASF Astronaut Autograph Show this weekend, Francis French had some copies of 1960s NASA nurse romance novels, which were a real thing back then. He was with Dee O’Hara, who was THE NASA nurse, and is a legend in her own right.
I’ve never read these books, but I read the back blurb once…the plot detailed Nurse Jones’ frustrations at being in love with some high-flying doctor who was in a dangerous position in the space program. However, of course This Space Available wasn’t happy with the plot and wrote what probably really happened. Here is, for the first time since 1963, the new, alternate ending to Julie Jones: Cape Canaveral Nurse…after the jump!

1963
Major David Scott walked up to Major Ed White, who was still wiping traces of his lunch from his mouth. It was Ed’s second lunch in an hour. “Have you ever been in love, Ed? Really in love? Because that’s how I feel about Nurse Julie Jones,” he said, tears filling his bright blue, “Leave It to Beaver” eyes.
Ed said, “Um, I really loved that burrito I just ate. Gotta run! Try to catch up with me!” And his reddish hair disappeared down the hallway. Meanwhile, Major Jim McDivitt, who had been sitting by Ed, looked confused. “What the hell just happened?” he said. “Hey Ed, you dirty dog, where’s my burrito?”
THE END

Do you have an alternate ending to this book? If so, leave it in the comments section. Hope y’all enjoyed that insanity.