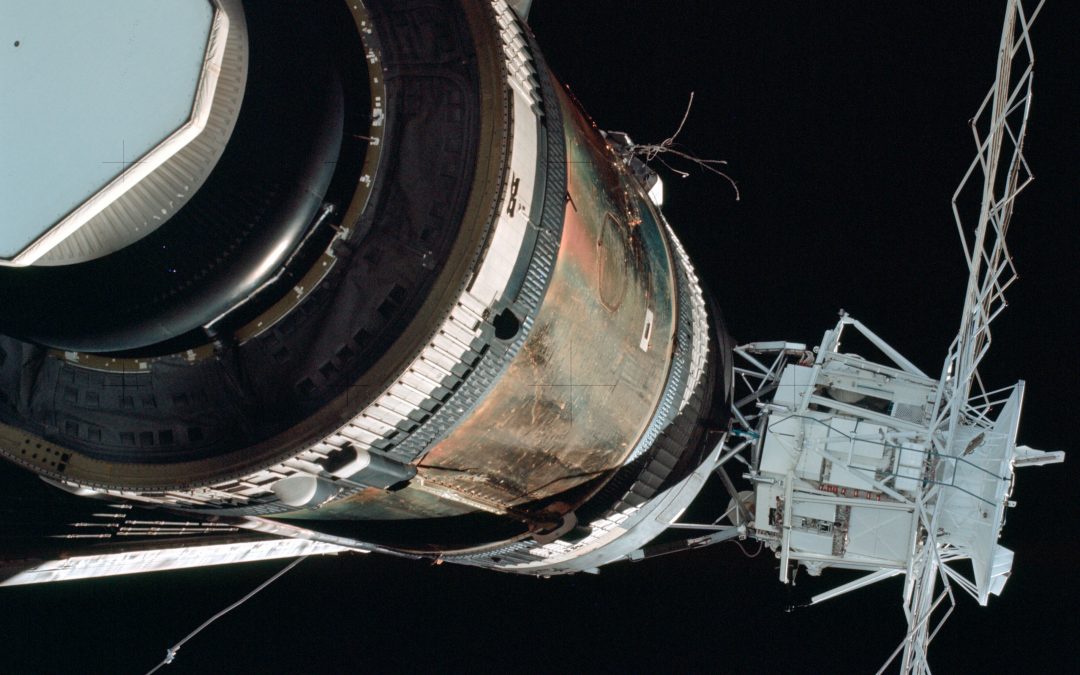 In last week’s This Space Available post, we introduced Dr. Gerard K. O’Neill, a Princeton physicist, who, at mid-career, was struggling to bring his ideas about space settlement to a wider audience. We left with him finally publishing his iconic article “The Colonization of Space” in the September 1974 issue of Physics Today, developing a larger base of followers with the establishment of the L5 Society, and becoming one of sci comm’s first superstars. While we will catch up again with O’Neill in future posts in this series, this week we will revisit Dr. Brian O’Leary following 1972, the year he introduced his friend O’Neill to a large, enthusiastic audience at Hampshire College – an event that would forever impact space history.

By the early 1970s, Dr. Brian O’Leary’s political entanglements had contributed to the end of his first marriage, and his status in the space community sustained yet another blow with the publication of an editorial piece entitled “Pie In The Sky,” which was published in The New York Times on June 5, 1973. While this piece’s ostensible purpose was to criticize the upcoming Space Shuttle program, O’Leary also took a few swipes at Skylab, NASA’s recently launched – and recently crippled – space station.

Upon its launch in mid-May 1973, freak launch injuries had resulted in the loss of Skylab’s micrometeroid shield, and its SAS-2 solar panel; moreover, its SAS-1 solar panel had jammed. O’Leary wrote in the piece’s opening paragraph, “The spectacular problems of the $2.5‐billion Skylab mission and the failure of the first three Soviet‐Salyut space stations may have dealt a death blow to manned space flight. The enormous expense, the high risk, the much‐ballyhooed and grossly exaggerated claims about the pertinence of manned earth orbital flights to the quality of life on earth are creating an ever‐widening credibility gap between the public interest and a vested interest inherited from the space race of the nineteen‐sixties.” His argument seemed to be that uncrewed spaceflight – or severely curtailing spaceflight in general – might better address social justice issues on Earth. “Pie In The Sky” ended with the question, “How about changing the Manned Spacecraft Center in Houston into the National Energy Research Center?” (This wouldn’t be O’Leary’s first reference to energy, as we’ll see in further posts.)

This piece, for obvious reasons, did not go over well with the spaceflight community, even though O’Leary had made some persuasive points about cost overruns at NASA. While the Space Shuttle program would prove to be spectacular and ultimately very useful, it would face delays until April 1981, and was more expensive than advertised. Two former XS-11 astronaut colleagues, Dr. Joe Allen and Dr. Karl Henize, would write a rebuttal to O’Leary’s op-ed in a letter to the editor titled “Space: Mankind Must Have A Dream,” and O’Leary responded back with his rebuttal to their letter later that summer. Again, his words – however well-meaning and correct he may have believed they were – created controversy among the astronaut cadre.

O’Leary had pointed out presciently in The Making of an Ex-Astronaut, “The NASA Office of Manned Space Flight, by far [NASA’s] most powerful wing, addresses itself only to the question, What can we do with the man? The question which should be asked is, How can we best perform a given mission, manned or unmanned?” But by June 1973, O’Leary seemed to not be just attacking human spaceflight, but all spaceflight in preference for social justice issues that were popular (and more important, in his view) at the time. This made him appear flakier than a bowl of corn flakes to his many of his former friends and supporters who still worked in space- or astronomy-related fields. In addition, his swipe at Skylab seemed cruel in light of all the problems that program faced in its earliest weeks (and the ultimate triumph over those problems). This further did not endear him to his colleagues, many of whom were working hard to fix the embattled space station.

Deke Slayton, O’Leary’s former NASA astronaut boss, would write scathingly in his memoirs, “O’Leary became a big critic of the [Space Shuttle], then a big proponent. Last I heard he was into psychic phenomena.” The “into psychic phenomena” part of O’Leary’s story would arrive in 1979, and would alter his standing within the spaceflight community even further.

A piece called “Memories of Brian” from an online source called A Healed Planet refers to O’Leary’s transformation from nerdy astronaut to nerdy professor to liberal protester to champion of space (then not such a champion of space, then somehow back to being a champion of space) to political maven to awakened New Age guru as “leaving the Establishment.” In 1975, Dr. Gerard K. O’Neill had brought O’Leary to Princeton to be a part of the university’s physics department, perhaps as a veiled “thank you” for his aid in finding O’Neill a greater audience in 1972. But O’Leary would soon become – as we saw beginning with his 1973 op-ed – disillusioned with space, and even with O’Neill’s futuristic visions. O’Leary wrote in his 1989 autobiography-as-personal-manifesto, Exploring Inner and Outer Space: A Scientist’s Perspective on Personal and Planetary Transformation, “I ended up writing and editing several books on these concepts, which were on the forefront of future space alternatives studied during the 1970s. But somehow, these ideas never even inched toward development. Clearly the American outer space effort had sunk into secondary status, stunningly confirmed for us in 1986 as we watched with horror the Challenger disaster.”

As the 1970s came to a close and the 1980s loomed with President Reagan, a resurgence in conservatism, and the Space Shuttle hopping to and from Low Earth Orbit, O’Leary wrote that “all the excitement began to wither” and “I still felt intellectually comfortable with the likes of [Carl] Sagan and O’Neill, but their world view was soon to be shattered for me. My inner space began to stir.” According to The Healed Planet website, in 1979 O’Leary experienced what is known in New Age circles as having had “a remote viewing,” a type of extrasensory perception (ESP) phenomenon. Following this experience, just as he had gone all in on his previous career in academia and enterprising space, he now went all in on exploring a host of New Age causes and interests. The website continued, “Brian never fully returned to the scientific establishment after that exercise, although his exit took nearly a decade to complete.”

His dedication to these interests was cemented further in March 1982, when he had what he described as a near-death experience during a drive on icy roads from New York to Boston. He described this turning point in his life vividly in Exploring Inner and Outer Space: “Going sixty miles an hour, I skidded. My car overturned many times, crashing off guard rails and into a deep ditch. It was wrecked like an accordion, with the only remaining space inside being that which contained my body.” The insurance adjuster who came to survey his car’s wreckage was stunned that O’Leary had emerged intact and unharmed.

The accident itself had resulted in an out-of-body experience. He continued, “Actually I felt euphoric but shocked. I had remembered that when the car began to skid out of control, all feeling left my body. I heard dull thuds and felt as if I were freely floating above the accident, moving in almost timeless slow motion. I remember darkness and some bobbing bright lights and then an awesome peaceful silence.”

Many people who experience similar accidents tend to buy a new car with the proceedings from insurance, and move on with their lives, business as usual. But not O’Leary, who took this accident as a sign: “…I began to move to change my life and increasingly to accept the new reality. I sensed that I needed to be in an environment that nurtured and encouraged my inner-space development. Within one month, I bought a used Ford van, packed all of my possessions, and moved to California.” O’Leary’s career would no longer run in parallel with O’Neill’s career. While O’Leary left space interests entirely to explore and promote a host of metaphysical interests including (but not limited to) ESP, free energy, and extraterrestrial life, O’Neill would approach the changing landscape of the 1980s with a more entrepreneurial view.

While This Space Available is taking next weekend off, we will soon catch up with O’Leary and O’Neill navigating the 1980s and beyond, which will see both men encountering choppy waters.