Kings of the Wild Frontier: Jim McDivitt and Apollo 9, 1969 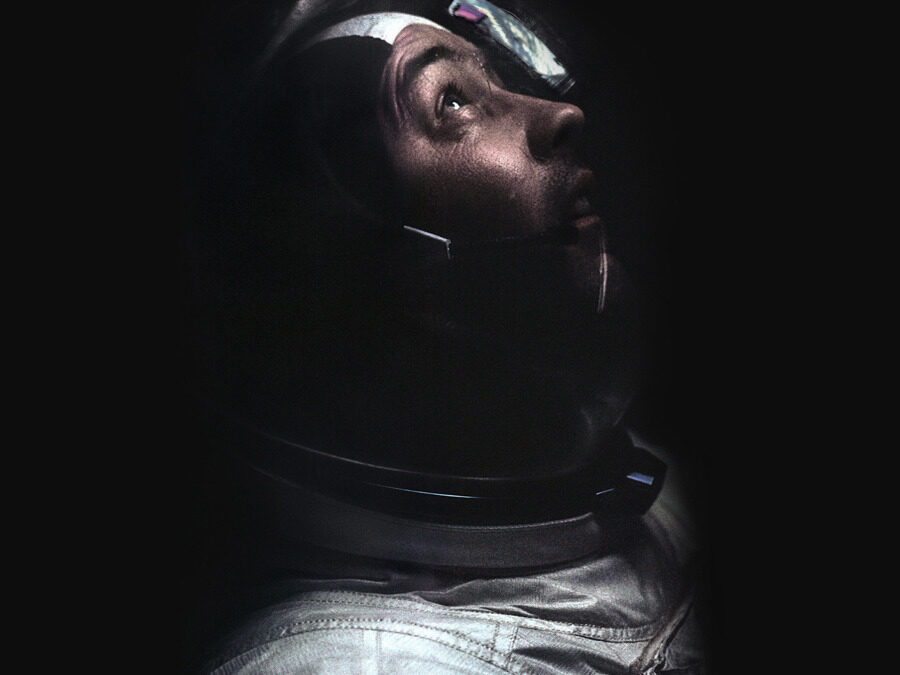 One “semi-myth” about the Apollo program is that they all followed the exact same template of “sequential steps” — first, test the command module; second, orbit the Moon; third, test the lunar module; perform a lunar landing dress rehearsal, and then land. But it’s probably fairer to view each mission as its own separate entity with critical differences and objectives. Each mission was like its own exceptionally colored jewel with distinctly reflective facets. Apollo 9 — perhaps the most underrated Apollo mission since the crew “only” reached Earth orbit to test the lunar module — indeed boasted its uniqueness among the program’s 12 crewed missions (I am including Apollo 1).

Apollo 9 — crewed by mission commander James A. McDivitt, command module pilot David R. Scott, and lunar module pilot Rusty Schweickart — demonstrated the world’s first actual “spaceship” (meaning it could only fly in space) could be piloted despite its fragility. In a 1999 NASA Johnson Space Center oral history conducted by Doug Ward, McDivitt discussed the time he and Schweickart visited Grumman to perform a storage review shortly before the March 1969 mission:

The first time — I’ve seen a lot of models. And they had solid sides to them and all that stuff. The first time Rusty and I went up to Grumman to do a storage review — a storage review is something you do before you really solidify where you’re going to put everything, and it’s so you can still make some changes — and I hadn’t been up there for a while. I was busy on the command modules at the time. And so, I went back up there and we went in the White Room. And we had hundreds of people, like NASA normally has. And we went over to this vehicle sitting there in the corner, and we had two different kinds of vehicles. We had non-flight vehicles that were heavy construction; we had the flight-weight vehicles. And we go over there, get in the spacecraft, and crawl in. And I can remember the first thing we did is we knocked off the shield around the environmental control system, which was a thing about as thick as a piece of paper and made out of plastic.

And so, we get in there and we start checking the stowage. We weren’t checking the spacecraft. We were just checking to see if everything fit. Every time we turned around, something else broke! And I’m pretty mild-mannered and I don’t get excited when things aren’t going right. But after we were doing this for about five or six hours, and everything we touched fell off the wall or broke or it did something! Finally, I got on the radio and I said, “Damn it, you guys! We’ve got — you know, we’ve got 200 people here. We’re all out here. We’ve been here all day long. We’re — and we’ve got this crappy training vehicle out here that, you know, we ought to get something that more resembles what the heck we’re going to fly with in space instead of this junk that we’ve got here! And, you know, this…”

I went on and — went on like that. And then I shut up, and there’s this long pause. And finally, somebody comes on the intercom and says, “Jim, that is the flight vehicle.” I looked at Rusty and he looked at me, and we said, “Oh my God! We’re actually going to fly something like this?” So, it was really chintzy. I mean the outside is Mylar; and, I mean, it was like cellophane and tin foil put together with Scotch tape and staples! I mean, it really is built like that.

Despite McDivitt and Schweickart’s mild horror at the flimsiness of their flight vehicle, the machine worked like a charm in the vacuum of space. McDivitt emphasized in the oral history, “Yeah, it doesn’t have to fly in the atmosphere. They did go and beef up stuff on the inside though, because it was just really falling apart. But anyway, the lunar module worked out great. We made very few changes to it for the original missions. We made a lot of changes to it later on for the longer mission. And the command module worked out well, too. You know, we flew one flight — Earth orbital — then we flew it to the Moon. So, it — while we had a lot of trouble up front in getting these things designed, built, and tested, when we actually got them into flight they worked just the way they were supposed to.” 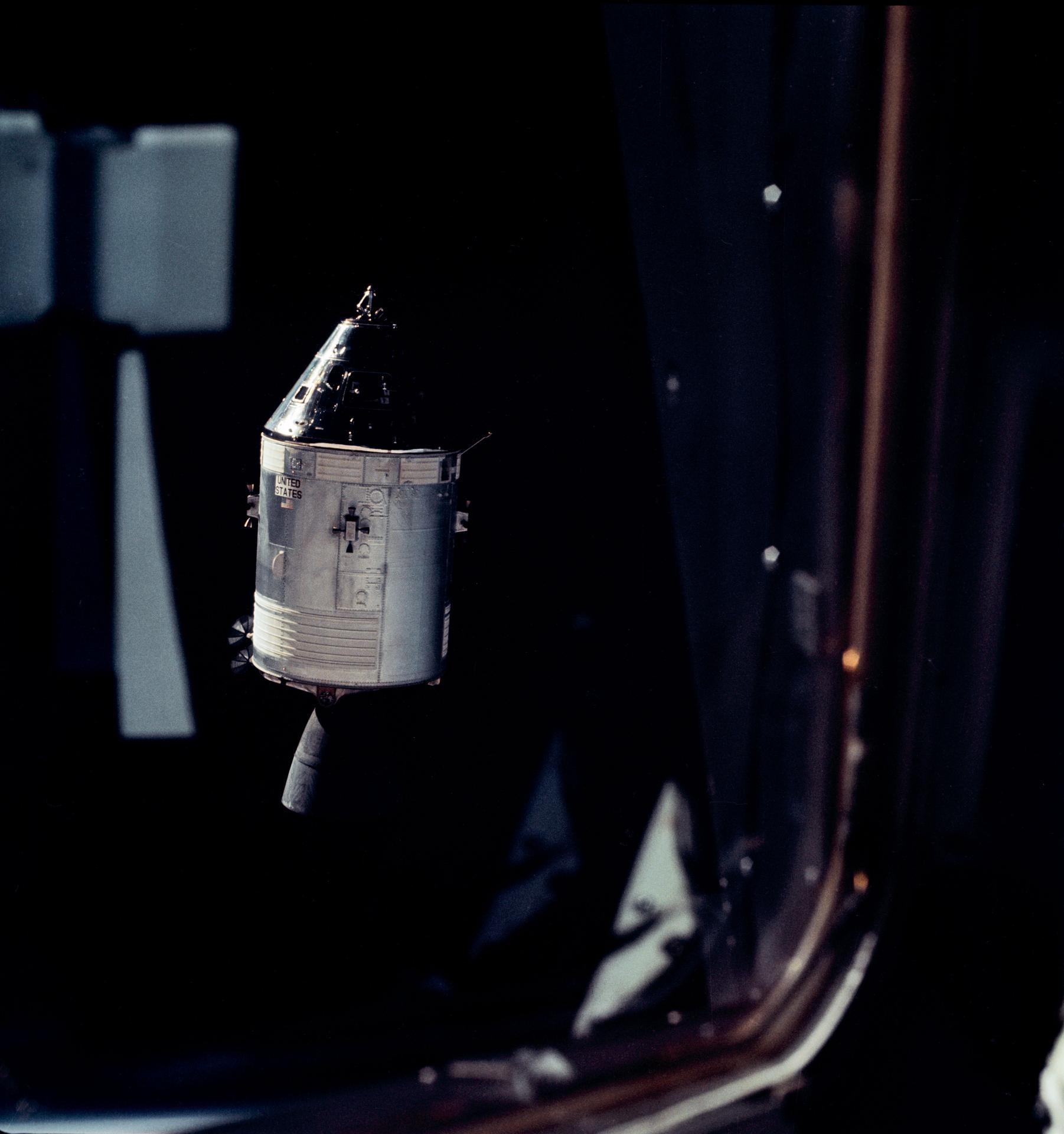 McDivitt, who died on October 13th at age 93, and his crew also demonstrated how NASA had leaped from strength to strength in less than four years, only two years after a significant setback and tragedy (the Apollo 1 launch pad fire). During his first spaceflight, Gemini 4, in June 1965, McDivitt unsuccessfully attempted to rendezvous with the Titan II launch vehicle’s upper stage. This has been variously chalked up to the Titan stage’s tumbling that posed a collision risk to the Gemini spacecraft, NASA’s lack of understanding of orbital mechanics, and McDivitt’s reluctance to use too much maneuvering propellant as he and pilot Edward H. White, II were set to fulfill another mission objective, the first U.S. extravehicular activity.

McDivitt went on to become the manager of the Apollo Spacecraft Program and continued to make tough decisions, particularly as in-flight problems occurred during Apollo 12 (two lightning strikes during launch), Apollo 13 (pretty much everything), Apollo 14 (docking issues), and Apollo 16 (service propulsion system issues). In 1972, McDivitt retired from NASA to enjoy a successful career in business. However, fifty years following his NASA retirement, he became the most unlikely “cover boy” in literary history with the publication of Andy Saunders’ Apollo Remastered: The Ultimate Photographic Record (even though he’d humorously underscored many a time at space events that Apollo 9 was “the most handsome Apollo crew). 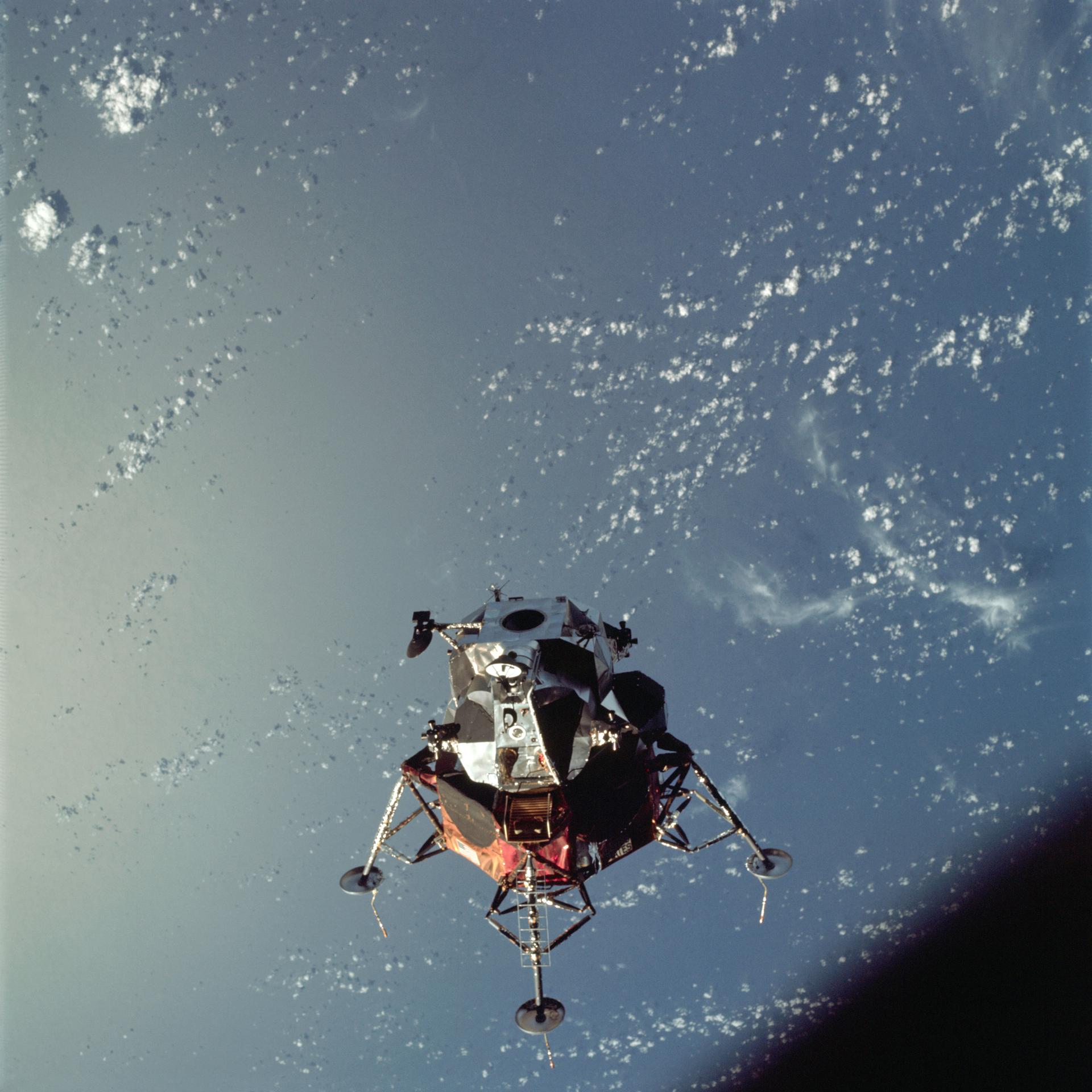 …And Spider as viewed by Gumdrop. 1969 NASA photo (note: not remastered by Saunders).

Saunders’ remastered photo of McDivitt flying the lunar module Spider is perhaps one of the most beautifully workmanlike Apollo images. One can see the stubble on McDivitt’s face and fatigue in his eyes, but there’s an unabashed glee in how he looks at the Earth speeding below (or above?) his spaceship. According to the Apollo Remastered website, here’s a little insight into how Saunders revealed this image, which previously had been underexposed save for the reflection of Earth in McDivitt’s helmet:

A critical element in presenting the images accurately is appropriate color correction. Many factors influence the color of the film — from [aging], to how it was originally processed (there are variances from magazine to magazine), to the angle of the Sun, the specific area of the Moon, the source of any reflected light, and even which type of window the photographs were shot through. Extensive research of transcripts of voice recordings from the missions, and post-mission reports, also provide insight as to how the astronauts observed color in the moment, and help inform decisions around color correction.

According to Saunders, more Apollo 9 imagery will appear in Apollo Remastered. It will undoubtedly be a touching tribute to the late McDivitt, whose intelligence, determination, and good humor turned tragedy into triumph in a little more than two years and allowed humanity to first step upon the Moon.

Author’s note: This piece was originally published on my Medium blog. Apollo Remastered will debut in the United States on Tuesday, October 25th, and will be available through all major booksellers. For more information, please visit the project’s website.