Here is the Introduction to “Asteroid Retrieval Feasibility Study” by the Keck Institute for Space Studies (KISS) at the Jet Propulsion Laboratory, released April 2, 2012, and available on the National Space Society asteroid page under the “See also” section. 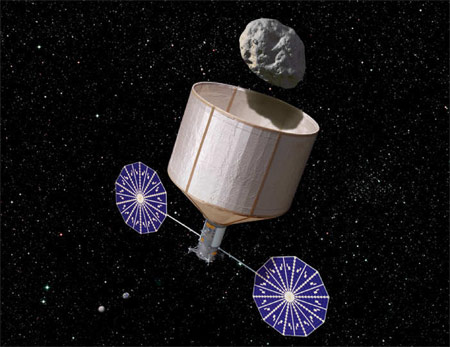 Illustration of an asteroid retrieval spacecraft in the
process of capturing a 7-m, 500-ton asteroid.
(Image Credit: Rick Sternbach / KISS)

The idea to exploit the natural resources of asteroids is older than the space program. Konstantin Tsiolkovskii included in The Exploration of Cosmic Space by Means of Reaction Motors, published in 1903, the “exploitation of asteroids” as one of his fourteen points for the conquest of space. More recently this idea was detailed in John Lewis’ book Mining the Sky, and it has long been a major theme of science fiction stories. The difference today is that the technology necessary to make this a reality is just now becoming available. To test the validity of this assertion, NASA sponsored a small study in 2010 to investigate the feasibility of identifying, robotically capturing, and returning to the International Space Station (ISS), an entire small near-Earth asteroid (NEA) – approximately 2-m diameter with a mass of order 10,000 kg – by 2025. This NASA study concluded that while challenging there were no fundamental show-stoppers that would make such a mission impossible. It was clear from this study that one of the most challenging aspects of the mission was the identification and characterization of target NEAs suitable for capture and return.

In 2011 the Keck Institute for Space Studies (KISS) sponsored a more in-depth investigation of the feasibility of returning an entire NEA to the vicinity of the Earth. The KISS study focused on returning an asteroid to a high lunar orbit instead of a low-Earth orbit. This would have several advantages. Chief among these is that it would be easier from a propulsion standpoint to return an asteroid to a high lunar orbit rather than take it down much deeper into the Earth’s gravity well. Therefore, larger, heavier asteroids could be retrieved. Since larger asteroids are easier to discover and characterize this helps to mitigate one of the key feasibility issues, i.e., identifying target asteroids for return. The KISS study eventually settled on the evaluation of the feasibility of retrieving a 7-m diameter asteroid with a mass of order 500,000 kg. To put this in perspective, the Apollo program returned 382 kg of moon rocks in six missions. The OSIRIS-REx mission [6] proposes to return at least 60 grams of surface material from a NEA by 2023. The Asteroid Capture and Return (ACR) mission, that is the focus of this KISS study, seeks return a 500,000-kg asteroid to a high lunar orbit by the year 2025.

The KISS study enlisted the expertise of people from around the nation including representatives from most of the NASA centers (ARC, GRC, GSFC, JPL, JSC, and LaRC), several universities (Caltech, Carnegie Mellon, Harvard, Naval Postgraduate School, UCLA, UCSC, and USC), as well as several private organizations (Arkyd Astronautics, Inc., The Planetary Society, B612 Foundation, and Florida Institute for Human and Machine Cognition). The people listed below participated in the KISS study and developed the contents of this report. The study was conducted over a six-month period beginning with a four-day workshop in September 2011 followed by a two-day workshop in February 2012, and concluding with the submission of this report in April 2012.