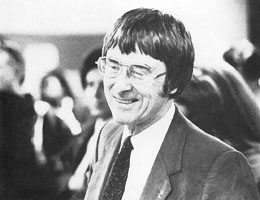 Snively and O’Neill reported that the current mass driver promises to be a complete success. Mass driver 3 is a vastly simpler machine than its predecessors, working by “pulling only” rather than the more complex push-pull mechanism of earlier models; it also has no superconducting bucket. The group reports that the physics has been thoroughly worked out, and performance conforms to calculations. Mass driver work is now entering engineering development.

Shown here is the Mass Driver 3. Featuring many new design features, this demonstration model is ready for testing. (Photo by C. Divine.)

O’Neill’s group also plans a satellite-based position-locating service. Dr. O’Neill — a private pilot — became interested in air traffic control several years ago; his concern about the current problem-ridden system led him to propose a system called Triad. Vehicle transponders would receive and transmit coded information to satellites for relay to a ground-based computer which would calculate airspeed, direction, and altitude; the result would then be transmitted back to the aircraft. The system could be used for ground tracking and rescue services as well. O’Neill and the Space Studies Institute are involved in a venture — the Geostar Corporation — to implement this system.

The conference also reported advances in materials processing. As noted years ago, lunar rock contains elements useful for constructing space habitats, factories, and power stations; how to extract them remained uncertain, since Earthbound techniques work poorly in space with lunar feedstocks. The session chaired by Robert Waldron covered both physical and chemical processing of nonterrestrial materials; space developers now have a choice of methods.

The session opened with William Agosto’s paper on solar furnaces; he reported that processing rock in a solar furnace reduced iron and released oxygen even without reagents. Agosto later described his work on electostatic separation; sliding ore down a grounded conductor through an electric field can apparently separate minerals on the basis of their differing conductivities.

Steven Gillett described geologic processes which could create lunar ores of greater purity than those found by the Apollo missions. According to Gillett, many rare elements are incompatible with common minerals; as the Moon solidified, incompatible elements would tend to separate from the deep “magma ocean.” Gillett thinks lateral separation would occur on the Moon, and that we should prospect for such naturally separated materials. (See Gillett’s article in last month’s issue.)

Robert Waldron recommended abandoning electrolytic separation of oxygen from lunar materials, because it requires much energy (which seems affordable) and massive facilities (a greater problem). Waldron also reported on the hydrofluoric acid leach process: while it requires water, the Moon seems able to supply enough, given careful recycling, and the process promises tremendous output. Waldron suggests that with landing of only 49 tons of equipment, production could hit one ton per hour after a three to four month start-up.

Mining engineer Richard Gertsch proposed adapting a simple method for lunar mining. On Earth, miners frequently use a “three-drum Blusher” comprising a power unit, a loading station, a scraper, and three cables (see Fig. 1 below). It works by paying out and reeling in the cables, drawing the scraper across a triangular area. When an area is exhausted, the entire unit is moved. It has several advantages: first, the technology is well-developed; second, the hardware is simple, reliable, and repairable; finally. the stationary power unit needn’t drag electrical cables around.

Figure 1. Shown here is a diagram of the system suggested for lunar use by Richard Gertsch, citing the available technology as a major advantage of the system.

Churn and Arnold proposed using a chilled, spinning wheel to draw a filament (or powder) from liquid aluminum. Solar energy could supply heat, microgravity presents no problem, and space vacuum would prevent oxidation. Grimley and Lipschutz reported on vacuum vaporization techniques using high temperatures; such processes are uneconomic on Earth due to their great demand for energy — and for vacuum chambers.

Other areas, while less nuts-and-bolts, saw the presentation of interesting work. O’Neill noted that the Space Studies Institute has been able to support new ideas that NASA has not. The Senior Associates program provides an important base for long-term research support.

Dean Bogdanoff, Chairman of Mechanical and Aerospace Education at Princeton University, keynoted the gathering with remarks on the past history of space development. Thirty years ago, he said, people talked about colonies and factories, but now the dreamers are talking to the more pragmatic. Richard Kline of Grumman noted that we need to move beyond simple return-on-investment and cost-benefit analysis to true entrepreneurship, remarking that MBA administrators (with their short-term outlook) are a problem even in the aerospace industry.

The biomedical and social sciences session, chaired by Kerry Joels and L-5 Board member B.J. Bluth, included papers on topics ranging from the habitability of space stations to the evolution of humanity. Maynard Dalton of NASA reviewed past space habitation experience; important factors range from architecture and food to contacts with family on Earth. Tasty, plentiful food is important, but it needs to be more highly spiced and condiments are needed to stick it in place. Restraints for personnel and equipment are also necessary, but chairs are useless. Dental hygiene is critical — dentists are a long way off.

Timothy Vinopal of Boeing discussed closed life-support systems; he considered LEO, GEO, Moon, and asteroid bases with systems ranging from open to 99% closed. Results suggested some advantages for near-Earth bases, but a requirement for closed-environment life-support systems for large deep-space projects with crews.

A paper by John Logsdon reviewed the history of space station proposals and discussed preconditions for a U.S. space station commitment. Today, the space station is seen as a staging base, operations center, and general-purpose laboratory. Political leaders — particularly the President — must expect both tangible and intangible benefits from the space station. Support from the pro-space community must be strong; opposition from space scientists can hurt, but their support will help little.

Frank White discussed space communitites, suggesting that we examine successful Earthbound communities first. He noted that successful groups maintain a dynamic balance between rules and a sense of vision; without agreement on purpose, competing factions develop.

Finney and Jones described humanity as an exploring species. They note that the young of all species explore, but that humanity retains a strong capacity for exploration into adulthood. The urge to explore, together with the need for resources, has led us across seas and promises to lead us into space. Two days later Jones discussed possibilities for travel throughout the galaxy, suggesting that humanity may spread among the interstellar comets. This would isolate some members of the human race, and perhaps lead to genetic variation among groups. Comets could provide interstellar migrants with raw materials, and giant mirrors concentrating starlight could supply energy.

The session on space stations began with an illuminating — and controversial — talk by Robert Frosch, former head of NASA. One problem today is that we must “pander to the pseudorealism of the so-called practical man.” Another is our economists: “to a first approximation, there are none.” Frosch noted that the aerospace industry lags in robotics and automation; he attributed this to a well-known conflict in the space community. On one side, some scientists insist that machines can do everything (though others disagree). On the other side some people want humans to do everything. The first group postpones work, waiting for the perfect machine; the second carefully selects some of the most talented and educated people in the country, trains them still more, then sends them into space to work as technicians. Frosch suggests we abandon these approaches, urging that we make full use of both our talented astronauts and our robotic accomplishments.

Dietrich Koelle of Messerschmitt-Boelkow-Blohm points out that astronauts will not perform routine commerical processing — they are too expensive. He foresees a variety of platforms, all reusable, and some permanent. William Raney suggested that a space station could both relay data to and from free-flying platforms, and distribute power to them using either microwaves or laser beams.

John S. Lewis discussed the prospects for mining strategic and precious metals from the asteroids. (See the review by Dr. Lewis in this issue.)

The manufacturing sessions saw papers on electrophoresis, beam-building machines, and External Tank utilization, among other topics. Sarnoff and Todd observed that if urokinase (an enzyme for treating blood clots) had been made in a space station a decade ago, it could have paid for the station through savings in medical care alone.

Brandt Goldsworthy of Goldsworthy Engineering brought a piece of a composite beam. The composite has a negligible coefficient of expansion (unlike aluminum); this means the beam won’t curve when exposed to temperature differentials in space. 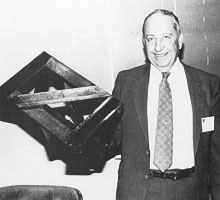 Brandt Goldsworthy, of Goldsworthy Engineering, holds a section of a composite beam. These composite materials boast a negligible expansion coefficient — a necessary attribute for space construction because of the extremes of temperatures that would exist on opposite sides of any structure. (Photo by C. Divine.)

In the panel on international and legal considerations, James Myers, legal representative of Space Services Incorporated, detailed criticisms of the U.S. government’s approach to commercial space ventures. Policy decisions take years; the process reacts to events, making it difficult to plan novel ventures; finally, no one in government will voluntarily relinquish regulatory authority. Myers and Rothblatt both advocated simplified, minimal regulation controlled by a single agency.

This Space Manufacturing Conference tackled problems raised earlier and outlined solutions. It seems the space community is attracting growing numbers of pragmatists to join the visionaries it has always had. Advocates of space development can rest assured that, as shown by this conference, the manufacturing aspect of space development is well in hand, and that we are truly on our way into space.