Five billion years ago, Spaceship Earth won qualification as the third large body orbiting around the Sun. Two billion years later, a sophisticated organization called organic life began to develop rapidly. It was powered by energy of nuclear origin transmitted from the Sun by a wave system: sunlight. Billions of years later again, large amounts of that solar energy were stored in the form of coal, oil and gas, as the residual chemical energy following the death of trees and other living organisms. More recently, one of the most succussful cellular organizations became a preferred support for a higher order system called intelligence, and the combination was called Man. And about two hundred years ago, human beings, who mostly had lived as small separate groups, began to integrate their activities into modern industrial societies. They needed more energy and a greater concentration of energy than could be offered by the direct metabolic chains leading from the Sun to the plants, and to the muscular energy of animals and men.

Developing on fossil energy like a fertilized egg on the stored nutrients, the industrial society has grown till the present state of crisis where easy-to-get hydrocarbons are almost gone. Still, today, no more than a small core of industrial people have gone to great achievements. They are supported by a large number of people known as the industrial nations, closely followed by an even larger number of wanting people who are in a complex process of development and need energy to do so. Thus, even if current political activities may alter the aspect of the energy crisis in different ways, the nature of the crisis will not be changed. It appears to be more closely linked with the long range evolution of human species and Planet Earth than with the specific political or economic systems and beliefs now in operation.

The days of cheap fossil energy are gone. Nuclear fission energy cannot be more than a transitional scheme: fuel supply again is limited, and the question of nuclear waste has not been solved. Turning to real time solar energy and going to outer space where it can be easily harvested appeared feasible to Peter Glaser (1968) with a project for orbital space power satellites. The idea fully developed when it met with Gerard O’Neill’s (1974, 1975) concept of space colonies and space industrialization. Since 1975, both ideas have gathered momentum and consideration among industry and government in the United States. Since 1978, the concept of solar power satellites has also won support in Europe and in the USSR.

The energy crisis brings about other prospects for large scale space industrialization, with heavy production of aluminum, iron, silicon, and other products that require large amounts of energy for processing. Metallic ore can be obtained from the Moon surface or from asteriods. It can be processed in high Earth orbit (O’Neill, 1976), and the products can then be used for the construction of space structures, or cast into re-entry bodies to be sent to the surface of the Earth. The processing capacities will eventually be in the order of millions of tons per year.

Asteriods could become an interesting source of materials for building the large space structures needed by the SPSs, the manufacturing centers, and the construction colonies. Research, especially by Eric Drexler (1974, 1975) of MIT and Brian O’Leary (1977a, 1977b) of Princeton, has shown that getting materials from asteriods would have advantages: retrieving asteriods and transferring them to high Earth orbit could be cheaper and also cleaner to the environment than lifting materials from the surface of the Earth. It would be cheaper again, and offer a better choice of materials than mining the Moon (O’Leary, 1977a).

Asteriods can provide raw materials for processing (carbonaceous chondrites can become the main source for water in space). The slag can be used as a radiation shield and as reaction mass for space tugs. The need of materials for the first stages of large scale space industrialization will be within one order of magnitude of one million tons (Driggers and Newman, 1977).

The typical candidates will be chondritic material of various types, have diameters between 50 and 200 meters, and have orbits with low delta-Vs close to the ecliptic plane. Little is known about such objects. It is estimated that objects with return delta-Vs lower than 3 km/sec can be found among the ApolloAmor asteroids (O’Leary, 1977c). Also, with the possibility of using solar sails to retrieve asteroids (Drexler, 1979), objects from known meteor streams could become candidates. They have higher return delta-Vs, in the order of 5 to 10 km/sec, but streams could be rich in asteroids of convenient sizes (Wetherill, 1978). This assumes use of asteroids already conveniently sized, whereas we could conceivably cut chunks of larger ones.

Studies to compare the use of chemical propulsion versus linear electromagnetic mass drivers have been made by O’Leary (1977c) showing that the latter would be far more economical. More recently, advances in the concept of solar sailing have been present by Drexler (1979). High performance solar sails might be less flexible in operation than mass drivers, but they would be competitive for high delta-Vs retrievals.

It appears that at least one other system could be considered for the propulsion of asteroids, using rotary pellet launcher devices (O’Neill. 1977; Heppenheirner, 1977). 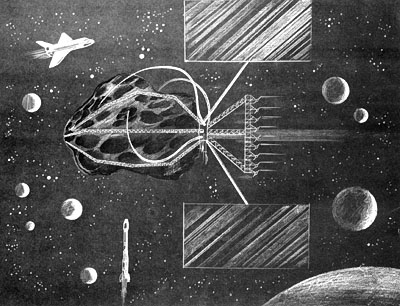 Rotary Pellet Launchers (RPLs) have been shortly contemplated for sending material into space from the surface of the Moon (O’Neill, 1977). They have been also considered as station-keeping devices for lunar material mass catchers (Heppenheimer, 1977). The major inconvenience of RPLs would be poor aiming precision. However, this would be of little consequence in the case of the propulsion of asteroids where exhaust velocity is the main requirement. There would be integration of variations in thrust direction over a long period of time, and corrections would be possible. Since the thrust efficiency varies only like the cosine of the error angle, the effect of variations would be minimal. Centrifugal acceleration and mechanical properties of the rotating arms would possibly be the main limiting factors in performance. Carbon or boron fiber have been proposed as materials for building the rotating arms.

Assuming a system with a capaciy for delivery of 500,000 tons in high Earth orbit, the RPL Reaction System compares with the electromagnetic mass-driver for the cost per delivered kg using mass-driver data given by O’Leary (1977c).

A RPLRS might have several advantages over a linear electromagnetic mass-driver. It is not possible to have a full operational test on a linear mass-driver until the full length of 200 meters is built in space. RPLs will he modular, and a single RPL can be built and pretested on Earth, carried by the Shuttle with minimal orbital assembly requirements, and undergo early full operational tests. Developing and testing the RPLRS is likely to require a much smaller initial investment than for the mass driver. A cluster of RPLs will be necessary, reducing the possibility of a general failure, and decreasing the cost of subsequent units after qualification of the first device. Once large quantities of mass reaction material will be available in the Earth-Moon environment where large scale space industrialization is considered, RPLs would possibly become convenient propulsion systems for space tugs of limited size and range.

Guy Pignolet, a member of the Space Studies Institute, presented the original of this article at the September 1979 International Astronautical Federation meeting.