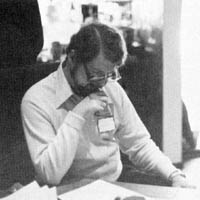 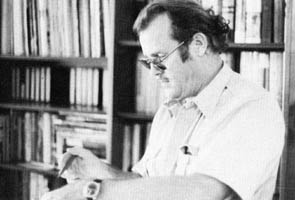 Author Larry Niven (left) hosted the council meeting while his writing partner, Jerry Pournelle (right) chaired many of the sessions. The weekend of discussions focused on feasible goals for national space policy.

At the invitation of the American Astronautical Society and the L-5 Society some thirty aerospace executives, consultants, science fiction writers and space activists met January 30 to February 1 to lay out a rational plan for the United States in Space for the rest of this century.

The participants included L-5 Board Members B.J. Bluth, Philip K. Chapman, Arthur M. Dula, Mark Hopkins, Jerry Pournelle, Robert Salisbury, J. Peter Vajk and Gordon R. Woodcock. Also present were notables such as G. Harry Stine, former astronaut Gerald Carr, science fiction writers Larry Niven and Poul Anderson, aerospace heavies G.B. Merrick, Chuck Gould, George Butler and Lowell Wood and academic leaders Dr. John McCarthy and Dr. Stefan T. Possany. The group, which has decided to call itself the Citizens Advisory Council on National Space Policy, charged itself with two goals for the all-too-short three-day weekend. It was to come up with an “insurance policy” for the space program; that is, a plan for the next fiscal year which would be acceptable to the Reagan Administration and keep the program going. Next was the harder goal of plotting a course for the next twenty years that would put the United States in a position to take full advantage of the resources of space.

The fruits of the conference are still dropping as the participants are firing draft proposals back and forth across the country. At press time, not all of the reports were finalized, but a clear consensus had begun to emerge.

The Council urged that the United States adopt a firm, strong space policy, one that would guarantee a permanent U.S. presence in space, while encouraging private enterprise to take on a larger role. The report stressed that the economy can only be helped by the development of new technologies and the utilization of extraterrestrial resources.

In the short term, the Council recommended that President Reagan maintain our present capabilities in space and consider some new programs for Fiscal Year 1982. (In his budget proposals, the President has cut some $600 million from NASA’s budget, effectively denying any new starts, but allowing most current programs to continue.)

In the longer run, it proposed a space policy that would call for the development of a space operations center (the name LEO Base was adopted) and a permanent manned presence in space by 1990, and the capability to establisha permanent Lunar base by the year 2000. The council also proposed a program to study the promising area of large space solar power systems (SPS). It recommended a funding level of $30 million per year to study how best to use this potential energy source.

SPACE IN THE “ERA OF LIMITS”

The report of the space advisory council recognized that in this time of rising expectations world-wide, the developing countries are being told that there will be nothing left for them, that the Earth is limited, with the result being increased international tensions. The council stresses, however, that virtually all of the resources mankind will ever need are readily available in space. By utilizing talents already present, we can tap the resources of the moon, develop new technology and manufacture new products for use on earth, and supply clean and efficient energy to the Earth by means of space solar power systems the report said.

But, the council warned, if the United States does not move now to develop these resources it probably will not be able to do so in the future because of an ever-increasing Soviet involvement and the possibility of passage of ill-conceived documents such as the largely-discredited Moon Treaty.

If the resources of space are to be rapidly developed, then private enterprise should be involved, the council said. The report encouraged a variety of incentives to enable private industry to develop new space processes and products.

By inducing private involvement, the report said, new technologies will be evolved, increasing productivity, which in turn stimulates the economy. In the long run, of course, profitable businesses will return the initial government investment not only through a generally improved economy, but directly through taxes. (A good example of this is Comsat. Formed in 1962, it has more than paid back the government’s investment.)

While stopping short of recommending space solar power as a national goal, the council did propose an expanded research program to explore all of the possible options, with a commitment to come after one or more prove to be economically viable.

At a funding level of $30 million per year, the council said, we could “continue to develop the economic and technical base of the concept.” Whatever the outcome of SPS research the council said that the studies would be valuable for the entire space program.

Among the options to be explored in the future for SPS include where the materials to build them would come from. Some advocate building the early ones from Earth-based materials, thus developing a fleet of heavy lift launch vehicles and inter-orbit transfer capabilities in the process. Others prefer, however, to utilize lunar resources from the beginning, possibly with a demonstration of power transmission from the lunar surface. Both options stress the need for a low Earth orbit operations center as a staging area.

There was little debate among the participants that we will need to use extraterrestrial materials soon, not just in space but also for use on Earth. There was strong support for the early establishment of a commitment to go back to the Moon, first with a robotic lunar polar orbiter to prospect for resources, then with people to mine the Moon and set up a permanent base by the turn of the century.

Another area of interest to the council is the asteroids. The report urged that these promising free-flying mineral deosits be checked out soon.

The work of the Citizens Advisory Council on National Space Policy is continuing, and there are plans to meet regularly in the future. The message of the council to the President is clear: space is important to the United States, and if the country acts now, much can be accomplished.

In its conclusions, the council said, “Retaining space options is time dependent. The lead time for space activities is long. Decisions made now in 1981 have consequences stretching far into the future. Decisive programs must be undertaken now or many capabilities will be lost; and once lost, they cannot be regained without costly or wasteful crash programs. Much that we should accomplish before 1988 cannot be done without immediate changes in our national space policies.” 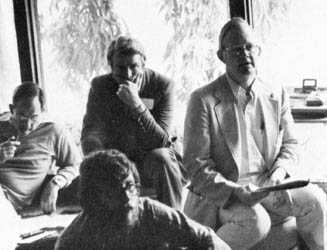 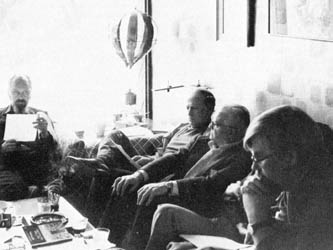 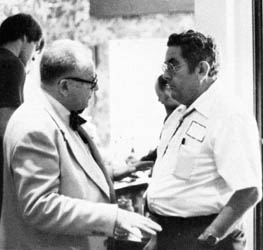 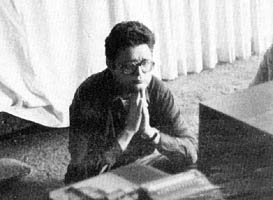 “The rediscovery of progress is a reasonable and feasible national goal for the United States in the 1980’s.

“Progress is possible. We do not have to accept limits to growth; but we do need specific strategies for progress. Growth requires investment and continuous expansion of the resource base … Space activities can be a significant part of our rediscovery of progress.”

These are the opening words of a report compiled during the jointly sponsored American Astronautical Society/ L-5 Society Conference on Planning America’s Future in Space. Copies of the report have been sent to President Reagan and his team of advisors. The emphasis is that there are areas of development that are, or will soon be, crucial to keeping space options open for the future. The consensus of the thirty-five leading researchers, writers, sociologists, and entrepreneurs present at the conference was that these options will in turn become crucial to the economic and military well-being of the United States, as well as the national prestige. It is stressed that both manned and unmanned exploration are required; and that these types of operations mustsoon become a matter of routine.

“The space question is crucial: if we do not preserve space options, we are betting national survival in order to save a miniscule fraction of the national budget. This is neither reasonable nor prudent.” It is suggested that the following options remain possible:

Move quickly to a permanent manned presence in space.

In order to reach these goals, recommended projects include “LEO Base One”, Halley’s Comet Flyby, Space Solar Power Systems, and a mission to either an asteroid or a lunar polar investigation.

The Statement on Preserving Space Options closed, “The above recommendations preserve significant options at relatively low cost . . . A Comprehensive strategy for using space as a means to pursue vital national interests is urgently needed. It should not be crippled in advance through pretended savings.”

* Included are both Earth-based and space-based uses of power.
**It is possible that both missions could be encased in a single flight and could be accomplished with slight modifications to “off-the-shelf” hardware.

Get the complete report:
Space: The Crucial Frontier [PDF 5.6 MB]