Why You Should Read This Article

The task of delivering 50 million kilograms of payload to low Earth orbit would require almost 1700 launches of the Space Shuttle if done in a straightforward manner. Judicious use of a large satellite incorporating a high specific impulse engine and a long tapered Kevlar cable, itself transported to orbit in multiple shuttle flights, could cut the total number of launches, including the satellite construction phase, to about 300.

A relatively new class of proposals for travel to and through space involves the idea of very long, very strong, tapered cables, spinning so that their tips move at or near orbital velocity. Although the concept promises to be one of the simplest and cheapest for massive orbital commuting in the long run — and could be used today for travel in space and on the Moon if there were call for it — present strength of materials limitations make the simplest variants of the idea infeasible for the most immediate need, namely transportation to and from Earth.

Two major types of Earth orbital cable (sometimes called skyhook) have been investigated in the literature. The simplest, but also largest, has a filament dropped to the surface from synchronous orbit, counterbalanced by one extending outwards. Anchored to the ground and kept taut by a ballast at the far end, this structure could be used as the backbone for an orbital elevator system (Figure 1). It has been rediscovered on at least three separate occasions (1) (4) (6) and is the central theme of two science fiction novels (3) (7). The second kind is newer, but has also been the subject of rediscovery (2) (5). It involves a much smaller cable in low orbit which rolls in its orbital plane and whose ends brush the Earth with the rotational motion cancelling the orbital motion at ground level. It is as if the cable were two spokes of a giant wheel that rolled along the ground (Figure 2). Payloads could be picked up on a spoke touchdown, and launched a half rotation later with greater than escape velocity. The momentum lost by the cable in this process could be returned slowly by high specific impulse engines at its center, or by capturing and landing payloads in a reverse of the launch process. With the latter approach the energy cost of orbital commuting becomes vanishingly small. 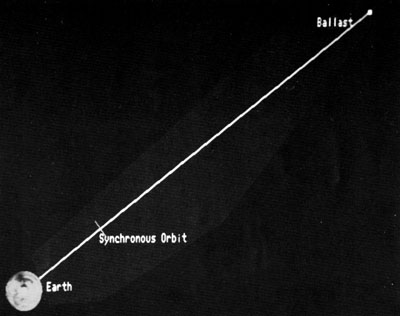 Figure 1: The Synchronous Skyhook (or beanstalk or orbital tower [or space elevator]). This is the simplest and most elegant of all the cable-to-orbit schemes. It is also the largest, most demanding and most expensive. A 150,000 kilometer cable is grown upwards and downwards from synchronous orbit. When the lower end reaches the ground it is firmly anchored. A ballast which keeps the entire cable in tension (by virtue of centrifugal force produced by the Earth’s rotation) is flown and attached to the far end. The cable can then be used to support climbing and descending payloads. 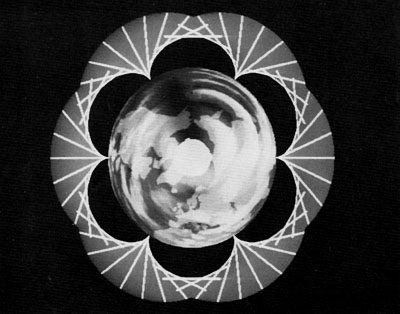 Figure 2: The Rolling Skyhook. This diagram shows the area swept out during one orbit. The cable length shown (about one third the Earth’s diameter) is optional in the sense that this length minimizes the skyhook mass for a given lifting capacity. The skyhook touches clown six times during each two hour orbit. Near the touchdowns the cable tip moves vertically, and the tip, with a constant upward acceleration of 1.4g comes to a momentary stop. It could pick up payloads during these encounters, and release them a half rotation later with enough velocity to take them to the orbit of Saturn. Such launches subtract orbital momentum from the cable.

The problem with the above schemes is that the taper and mass required by the cables is exponential in the square of the weight/strength ratio of the cable material, and is astronomical if the material is too weak. The strongest commercially available material is Dupont’s Kevlar synthetic fiber, which is five times stronger for its weight than steel. A synchronous skyhook of Kevlar would weigh 1013 as much as it could support at one time, while an optimally sized Kevlar rolling cable would be 107 times as massive as its payload. A material only five times as strong as Kevlar would bring these numbers into the range of the feasible. With such a material the synchronous cable would mass 10,000 times as much as its payload and the rolling cable only 100 times its lifting capacity. Since the cables can move such payloads repeatedly, they could ultimately transport many times their own mass.

Although five times the strength of Kevlar is well within the theoretical bounds for normal matter, and strengths of this magnitude have been observed in the laboratory in small samples of several substances, the timescale for commercial availability of such strength in bulk materials is uncertain.

Half A Skyhook Is Better Than None

For a given material, the required mass of a spinning cable is exponential in the square of the desired velocity of the cable tips. Similarly the mass ratio of a rocket is exponential in the velocity it must achieve. These facts suggested to us that a combination of rocket and skyhook, each providing about half the velocity needed for Earth orbit, might be superior to either alone. A spinning cable in low Earth orbit would catch a rocket-accelerated payload moving at about half orbital velocity and accelerate it to full orbit, in a lower energy version of the rolling skyhook maneuver (Figure 3). 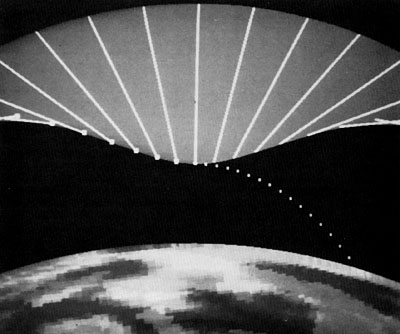 Figure 3: A Rocket hook Combination. A (relatively) short orbiting cable is spun moderately so that its tips move at about half orbital velocity. A (also relatively) small suborbital rocket able to achieve half orbital velocity delivers a payload to the skyhook tip, which then accelerates it to full orbital speed and beyond. This variant could be built today. The dotted path is the payload’s trajectory.

Besides giving an overall mass advantage, combining a rocket with a skyhook makes it practical to use weaker materials in the sky-hook. Our analysis of a number of situations using the space shuttle as the rocket and Kevlar as the skyhook construction material lead us to the following encouraging results.

With the rocket/skyhook combination a large task of delivery to space can be accomplished with less material than with either method alone.

Instead we imagine a cable grown upward from an initial orbital altitude of 185 km. As construction proceeds the shuttle docks with the lower end of the growing skyhook. As the skyhook lengthens, its center of mass moves into higher orbits, and its lower end moves more and more slowly with respect to the ground. The shuttle can thus arrive and dock at lower and lower velocity, with correspondingly greater payload per trip. The payloads would then be ferried up the cable, elevator style.

We also considered two similar schemes. In one a shorter cable in low orbit spins so that its lower tip moves at reduced velocity, in a small scale version of the rolling sky-hook mentioned earlier. This variant results in the least number of necessary launches, but provides the least time and highest g forces for docking. The third possibility involves a cable that oscillates about ninety degrees from the vertical in each direction, under influence of the vertical gravity gradient. This “rocking” cable can transport payloads to orbit velocity without being climbed, and is intermediate in its properties between the vertical and spinning varieties.

The skyhook structure, whichever variety, incorporates a power plant and a propulsion system to boost the upper end of the growing skyhook into the correct orbit, and to replace orbital momentum transferred to the shuttle payloads on each docking. The power plant was assumed to have a power density of 10 kilograms per kilowatt and the propulsion system a thrifty specific impulse of 5000 seconds, about the numbers for solar electric ion engines suggested for comet missions.

The skyhook can be looked upon as an energy and momentum storage system by which an ion engine operating for long periods can accumulate its effect for the short, high intensity, spurts needed in an Earth launch.

The following table summarizes the results for a range of possibilities. The strength column gives the strength to weight ratio of potential materials, in units of “specific length,” which is tensile strength divided by density times one gravity. Intuitively specific length is the length of material fashioned into a uniform rope that can just support itself when suspended from one end in a uniform 1 g field. Kevlar has a nominal specific length of 200 kilometers, but if the cable is built assuming this strength there would be no allowance for unexpected loads or for slight deterioration of the material. An assumed strength of 100 km lets the sky-hook operate at a stress equal to half of Kevlar’s strength, and 50 km would give us a very conservative safety factor of four. We have included an entry for 400 km to allow for near future advances in materials.