L5 News: The Value of the Moon

No gravity well, lots of surface area, easy to move, rich in volatiles (bound water and organic compounds), and rich in certain metals, such as cobalt and nickel: Sure, asteroids have lots of advantages for extraterrestrial resources, as Eric Drexler reviewed last February. Why should we bother with mining the Moon at all?

Because the Moon (and any planet-sized body, for that matter) offers advantages of its own. First, don’t underestimate the value of the Moon’s proximity, at least for the nearterm. Launch windows are frequent; telemetry is easy (you can almost operate a robot on the Moon from the Earth’s surface); and short travel times mean that breakdowns (a la Apollo 13) are potentially less catastrophic.

But much more fundamentally, large bodies like the Moon are chemically fractionated, or “differentiated”. Mother Nature has done chemical separation for you on a planetary scale. Why not take advantage of it?

(Many asteroids — to judge by meteorites — have also undergone some chemical fractionation, due mainly to the heat from short-lived radioactive elements. However, such fractionation is small-scale, and is also one-shot because the asteroid cools quickly. A planet, on the other hand, keeps cooking for a long, long time.)

To underscore planetary differentiation, let’s look at some average element concentrations (so far as they’re known) in the Moon’s crust relative to average Solar System material (Table 1 ). The Earth’s crust is also shown for comparison.

As has been pointed out many times before, the lunar crust is greatly depleted in many elements. These elements fall into several categories, which a geochemist calls “volatile”,
“siderophile”, and “chalcophile”.

Volatile elements have low boiling points and vaporize easily. They include hydrogen and the noble gases (helium, neon, and so on.) All volatile elements are extremely rare on the terrestrial planets because by and large they’ve been boiled out. This also applies to asteroids; even a carbonaceous chondrite contains vastly less hydrogen, proportionately, than does the Sun or Jupiter.

Siderophile (“iron-loving”) elements tend to alloy in iron metal. Representatives are cobalt, nickel, and the precious metals. Finally, chalcophile (“sulfur-loving”) elements are those that prefer to combine with sulfur; besides sulfur itself, they include metals such as zinc, lead, and copper.

By the same token, however, other elements are enriched — some by substantial margins — in the Moon’s crust. These are what a geochemist calls “lithophile” (“rock-loving”) elements, elements that preferentially combine with silicon and oxygen in silicates. Such elements include the major elements aluminum, titanium, magnesium, and calcium, as well as many minor elements including zirconium, barium, uranium, and thorium.

Such large-scale chemical fractionation is an automatic byproduct of planetary formation. The siderophiles and chalcophile elements have mostly sunk into the Earth’s core, leaving behind a silicate mantle. (Where the Moon’s siderophiles went is more of a puzzle; they may also be in the Earth’s core, if the Moon split off from the Earth when both were accreting.) In turn, the crusts of both Earth and Moon reflect further fractionation, having been “sweated out” of the mantle.

Even if only this had happened, the Moon would obviously be a useful source of common lithophile elements like aluminum and titanium, commodities of more than academic interest!

However, more has happened. Elements are not homogeneously distributed in the Moon’s crust; we know this from limited remote sensing on the last few Apollo missions, and from increasing knowledge of the Apollo samples. About one percent of the regolith (not “soil”, dammit!) at a given site is “exotic”, being derived from distant meteorite impacts. Thus impact, rather like terrestrial erosion, has furnished a crude remote sample.

Indeed, localized concentrations of rare elements — ores — probably occur in the Moon’s crust (“ore” simply refers to something that’s worth mining; it does not imply any particular geologic process).

Rare elements can be roughly divided into two geochemical types: incompatible and dispersed. Dispersed elements are chemically similar to a common element, and replace that element in its minerals. Such elements do not become very concentrated by geologic processes.

Now the punchline: many important and valuable elements are incompatible as well as lithophile. They include chlorine, lithium, beryllium, zirconium, uranium, thorium, the rare-earth elements, and so forth. Lunar ores of such elements are a strong possibility.

You may have heard that water is vital in ore-forming processes, even in igneous processes (those resulting from cooling of molten rock), because water dissolved in a magma allows elements to move around and become concentrated. This is not always the case.

For one thing, although there was no water in the lunar magmas, there were some other relatively volatile elements — a little chlorine, a little sulfur — that might expedite ore formation. (We should be doing laboratory experiments on “dry magma systems” spiked with such elements to see what processes occur. Such experiments haven’t been done because they aren’t relevant to terrestrial magmas.)

For another example, consider a body of cooling magma. As common minerals crystallize, the incompatible elements become more and more concentrated in the remaining melt. Eventually they become sufficiently concentrated to form their own minerals, and voila! You end up with distinct veins of minerals in a much larger body of rock. This has happened on the Moon: a rock type nicknamed KREEP (from potassium (K), Rare Earth Elements, and Phosphorus), which is highly enriched in incompatible elements, is widely distributed on the Moon. It represents the residual melt from the magma ocean discussed below.

But, KREEP or no, we’ve seen no ores! you say. True, but we need to be careful about declaring there are none on the Moon. It’s remarkable how much has been learned from a wheelbarrow-full of dusty rocks, but the Moon is huge; it’s a planet. Lunar study so far has been rather like studying the Sierra Nevada — also made up of igneous rocks — by looking at the gravel in a stream bed coming out of one of the canyons. You could learn a lot by sophisticated analyses, but you’d miss an enormous amount of detail. (We’ve never seen pure KREEP, for one thing.) 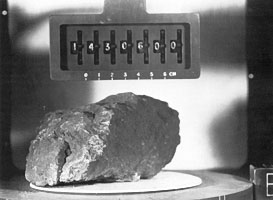 Although many samples of Moon rocks were brought back to the Earth by the Apollo missions, not much is known about the detail of the composition of the Moon. “Lunar study so far has been rather like studying the Sierra Nevada by looking at the gravel in a stream bed.” (Photo courtesy NASA.)

With these caveats, the basic model of lunar geology is that of a magma ocean. The Moon, upon its formation, was at least several hundred kilometers deep in magma, and was probably molten clear through. As the magma cooled, a calcium-aluminum silicate, plagioclase, crystallized and floated, while other silicates (olivine and pyroxene, both rich in magnesium and iron) sank. If these processes went to completion, a layered Moon would result, with a plagioclase crust overlying an olivine and pyroxene mantle.

Subsequently, mare basalts, the lavas that make up the dark lowland plains (Galileo’s misnamed “seas”) began erupting perhaps 4 billion years ago, and continued intermittently until about 2.5 billion years ago. These lavas formed by partial melting of the Moon’s mantle long after the magma ocean had solidified. The melting was caused by heat building up from the decay of natural radioactive elements.

However, complexities are appearing in this model as more data are gathered. The magma ocean didn’t sit and settle out quietly like an abandoned jar of salad dressing.

For one thing, it was being stirred by gigantic impacts while it was cooling. The magma was also convecting, like hot coffee after cream is added. Finally, different kinds of rocks occur within the generally plagioclase crust, and these apparently reflect other bodies of magma that were forced into the crust after it had cooled.

These complexities bode well for the presence of lunar ores, because ore formation results from a large number of continuing processes. To be sure, the Moon’s crust had settled down by about 4 billion years ago, whereas Earth’s crust is still active, but the Moon was nonetheless active for hundreds of millions of years.

So how do we find ores? Early lunar prospecting can be carried out by remote sensing, a “lunar Landsat”. Remote sensing is feasible because meteorite impact does not scramble the surface hopelessly. Although a little of the crater ejecta is thrown for great distances, the vast majority doesn’t move far. Thus the regolith reflects the underlying bedrock pretty well. ( Indeed, impacts do a service by exposing buried rock. Without terrestrial-type plate tectonics and erosion, no other process does so.)

In fact, lunar remote sensing is easier than terrestrial in one respect: the lack of an atmosphere. No atmosphere lets you get much closer to the surface, and also permits some techniques that don’t work on Earth. For example, you can detect element concentrations directly from orbit by X-ray fluorescence (XRF). Solar X-rays induce secondary X-rays in lunar surface materials, and the secondary X-rays are diagnostic of the irradiated elements. XRF is not possible on the Earth because solar X-rays are screened out by the atmosphere.

Lunar remote sensing is probably easier than asteroidal sensing, too, both because of the Moon’s proximity, and because the Moon is big enough to set something in orbit about it.

The oft-discussed but much-delayed lunar polar orbiter looks to be the lunar Landsat. As with a polar orbit on the Earth, a polar orbit around the Moon lets you see the entire surface eventually as the Moon rotates underneath. (And yes, we can see if there’s ice in cold traps at the poles, too!)

Asteroidal versus lunar resources is not an either/or proposition; in fact, they’re largely complementary. The bodies have different chemistries and will be useful for different things.

Asteroidal resources will be important for volatiles and for siderophile metals; cobalt, nickel, platinum. Lunar resources will be important for common lithophile elements such as aluminum, titanium, and calcium. And the Moon may also have ores of rare, incompatible, lithophile elements such as beryllium, lithium, zirconium, niobium, tantalum, and so forth.

We should use both sets of resources. And we can use both, even in the near term. Most of the developments needed, such as extended life support systems, space tugs to get from low-Earth orbit to elsewhere, and mass drivers, are relevant to exploitation of both lunar and asteroidal resources.

The technical paper from which this article is adapted will be appearing in the Proceedings of the Sixth Conference on Space Manufacturing, held at Princeton in May, 1983.