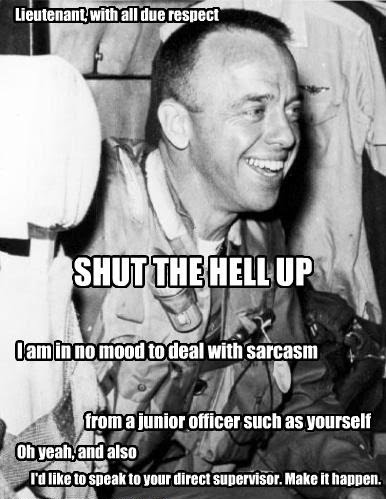 “Lieutenant, your incompetence has nothing to do with me.”
The Ice Commander tells it like it is.

Alan Shepard was a self-admitted sonofabitch who was Navy all the way. He had a slight reputation as being moody and steely-eyed – a bit authoritarian (not shocking, as this guy was one heck of a carrier fighter pilot). In his office at NASA he had a sign on the door with a smiley face on one side, and a frowny face on the other side. If you walked in when the sign was all frowny you were in for trouble. That being said, the “Ice Commander” could do whatever he wanted. He was the first American in space and he walked on the freakin’ moon. Enough said.