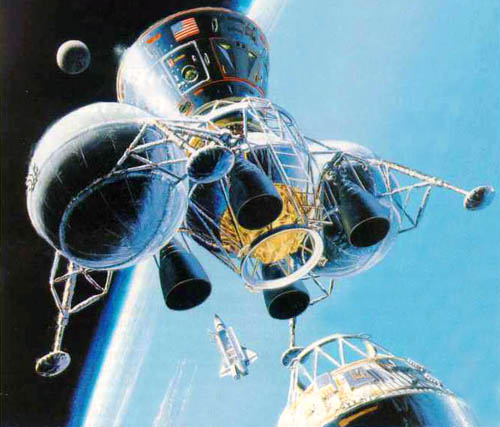 EARLY LUNAR ACCESS (ELA) was a “cheaper-faster-better” manned lunar mission study, carried out by General Dynamics in 1992-93. It was intended as a joint US-European pathfinder for NASA’s more capable 4-man First Lunar Outpost (FLO). The project tried to reduce total costs by a factor of ten compared with Apollo, by utilizing existing launch vehicles rather than developing a large Saturn V-class rocket. This would be feasible since modern electronics, rocket engines and materials are more capable and weigh less than their Apollo-era counterparts. Hence a modern manned lunar spacecraft need not be as heavy as the Apollo Lunar Module. General Dynamics also claimed that an ELA-type program would have major scientific merit. It would offer major improvements beyond what was accomplished with Apollo, since ELA would enable 2-3 week crew stays on the Moon. Politically, it would encourage cooperation between NASA and ESA (or other foreign space agencies) which would make it appealing to US politicians.

Early Lunar Access would use the Space Shuttle and a large expendable launch vehicle such as the Ariane-5 or Titan IV. The former would carry a manned Lunar Exploration Vehicle spacecraft while the latter launches a wide-body Centaur G’ rocket stage. Both payloads would rendezvous and dock in low Earth orbit. The Centaur then fires its engine to accelerate the complex toward the Moon and is then jettisoned. To save fuel, the LEV makes a direct landing rather than enter an intermediate lunar parking orbit as Apollo did. The vehicle retains sufficient propellant to perform a later ascent burn to return the crew to Earth. For unmanned cargo missions, the LEV carries a heavier payload and uses up all its fuel for landing.

The launch vehicles (Shuttle plus Titan IV or Ariane-5) would have required some upgrades. The Shuttle would have needed either a lightweight Al-Li External Tank or Advanced Solid Rocket Motors to carry 25,720kg payloads to a 300km orbit. The new ET was subsequntly made available but the ASRMs were cancelled in 1994. The ELVs would have been uprated to carry a 27t payload into Earth orbit. Proposed modifications included new aluminium-lithium tanks for the Titan IV plus a pair of additional solid rocket boosters for the Ariane-5.

The Centaur G’ would have been modified for missions lasting up to ten days rather than a few hours. A single uprated RL-10 engine (since developed for the Delta III project) would have replaced the previous twin-engine configuration to save weight and improve reliability. The propellant tanks would have been enlarged and additional thermal insulation, power and reaction control propellant would have increased the in-orbit lifetime.

The crew capsule would be derived from the Apollo Command Module that last flew in 1975. It retains the external size and shape of the original Apollo CM design to take advantage of the existing aero- and thermodynamic databases developed during that program. The interior has however been scaled down since it only supports a crew of two instead of three, and the capsule is lighter since its design is based on modern materials, lightweight electronics and construction methods.

The lunar habitat (where the crew would live during their 21-day stay) would also be derived from previously developed hardware — in this case the Space Station Freedom mini-pressurized logistics module built by Italy’s Alenia Spazio for NASA. The MPLM was later replaced with a larger module that presumably would be too heavy for Early Lunar Access. However, a scaled down version could still be taken from ESA’s Ariane Transfer Vehicle which utilizes the same basic Alenia-built module.

Entirely new systems include a multiple payload adapter plus lunar science equipment and surface elements carried on the first unmanned ELA mission. The major new element is the Lunar Transfer Vehicle itself. It features an advanced high performance four-engine liquid oxygen/hydrogen propulsion system that throttles to enable soft landings on the Moon. The engines would be based on the RS-44 or similar systems. Redundancy is achieved through the capability to shut down a diametrically opposed pair in the event of a failure. The LEV system weights are summarized in Table 1.

The total Shuttle payload in the table is to a 300km, 28.5 degree orbit. The payload mass exceeds the Shuttle’s landing limits in the event of an abort, so a mechanism that dumps the LEV propellant in case of emergency would have to be incorporated. NASA safety requirements probably require that the propellants be carried outside the Shuttle cargo bay during ascent as well. Boeing has studied a system that would transfer excess propellant from the Shuttle External Tank in orbit.

Lunar missions using low Earth Orbit Rendezvous (EOR) are constrained by critical launch window opportunities. The LEV is deployed and checked one day after the Shuttle reaches orbit. If there is a problem that cannot be fixed in orbit, the LEV and its 2-crew is retrieved and returned to Earth with the Shuttle. Under normal conditions, however, the expendable launch vehicle would then place the Centaur rocket stage in a co-orbit with the Shuttle. The LEV and Centaur then dock (possibly assisted by the Shuttle) and depart from low Earth orbit a day later, when the launch window opens.

If the LEV/Centaur fails to depart on time (the launch window is in the order of one minute), there will be another translunar injection opportunity on the next orbit 90 minutes later. The Moon, however, will no longer be at the same point as the spacecraft when it is time to land three days later. A midcourse correction will be required to “catch up” with it. Consequently, the LEV would carry an additional 2% propellant for unplanned midcourse plane change maneuvers. This will provide a total delta-V or velocity change capability of 205 meters per second, sufficient for 13 lunar departure opportunities over 18 hours. In contrast, Apollo only had about four translunar injection opportunities, but of course there was no Earth orbit rendezvous requirement. If the departure window is missed completely, there will be another series of 13 departure opportunities 3-11 days later. The Shuttle, Centaur and LEV can wait up to a week in Earth orbit so there would typically be two translunar injection opportunities per mission.

An example of an Early Lunar Access manifest for Lunar Missions 1 through 4 (cryogenic LEV) is given in Table 2 below, which summarizes the payloads for the first four missions and
their weights, in metric tons.

Mission 1 is primarily science oriented and would offer immediate returns (geophysics, ultraviolet & optical telescopes) after the first landing. Mission 2 lands the habitat module, an environmental control & life-support system (ECLSS), fuel cells and other equipment. The first crewed mission then occurs with Mission 3. The total cost at this point would be $13 billion (1992 rates) over seven years for a “business as usual” all-NASA program. This figure includes all costs (research & development, launch, production, operations, testing) apart from the scientific payloads associated with the missions. European cooperation (where ESA would provide three Ariane-5 launchers, the habitation module and participate in some development and production work on the LEV/crew capsule) would reduce this figure by about $4 billion. A “cheaper-faster-better” approach would reduce the US share further, to $6 billion and total program costs to $10 billion. The marginal cost of continuing the program after this would be $2 billion per mission. The fourth expedition (not rigorously investigated by General Dynamics) would land additional equipment, supplies and spares for an additional 2-3 piloted missions to the same site.

If it had been approved, the ELA project would have started in 1994 with a number of 1-year hardware definition studies. Hardware development would have started in 1995, leading to a first unmanned landing in mid-1999. General Dynamics assumed that at most two Shuttles and two expendable launchers would be available per year. Mission 2 would take place six months later, followed by the first manned landing six months after that. Early Lunar Access would then have given way to NASA’s more advanced First Lunar Outpost (FLO) program in 2002.

In some ways, Early Lunar Access was ahead of its time both technically and politically. The political basis quickly evaporated when the Clinton Administration ordered yet another Space Station dedesign only months after General Dynamics unveiled the ELA project in early 1993. The International Space Station and Shuttle has commanded virtually all of NASA’s shrinking manned spaceflight budget ever since. Technically, ELA also ran into problems when NASA subsequently discovered that General Dynamics had undersestimated the weight of the Lunar Exploration Vehicle. Had the project been approved, it would have required further costly upgrades to the Shuttle (Advanced Solid Rocket Motors in addition to the already approved super-lightweight External Tank) and Titan IV (stretched aluminium-lithium propellant tanks).

The design philosophy behind Early Lunar Access appears solid, however. The major space powers (USA, Russia, ESA, Japan) continue to uprate their expendable rockets while new vehicles are on the drawing board. Spacecraft electronics keep getting cheaper and more capable while propulsion and materials advantages will make it possible to launch heavier payloads on smaller vehicles. This trend has continued for decades and the major design driver today is economic in nature — not political. Someday it will be possible to assemble a manned lunar spacecraft entirely from existing off-the-shelf “building blocks” already developed for the Space Station and commercial satellite programs.