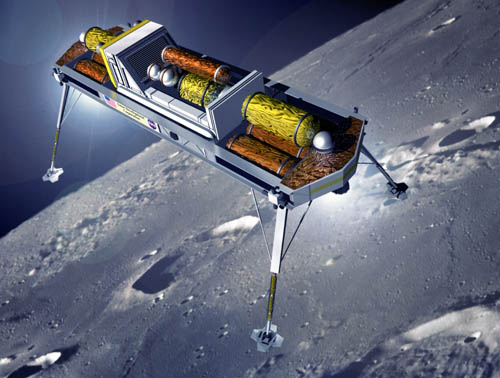 The NASA/JSC “LUNOX” proposal from 1993 tried to reduce the cost of maintaining a “First Lunar Outpost” by producing liquid oxygen propellant for the return to Earth from lunar soil (the lighter hydrogen fuel is brought from Earth since it is not readily available on the Moon). Similar in-situ resource utilization schemes had been proposed for large moonbases, but “LUNOX” tried to use the same strategy to reduce the cost of pioneering small-scale manned lunar exploration as well. This technique would permit drastic downsizing of the manned space vehicles and cost reductions of up to 50%. The number of launches would also be reduced, despite utilizing smaller Shuttle-derived rockets instead of Saturn V-class rockets.

The unmanned lander depicted above carries a lunar oxygen production plant/storage facility and a nuclear power reactor. The total mass of this “package” is 12,454 kilograms. 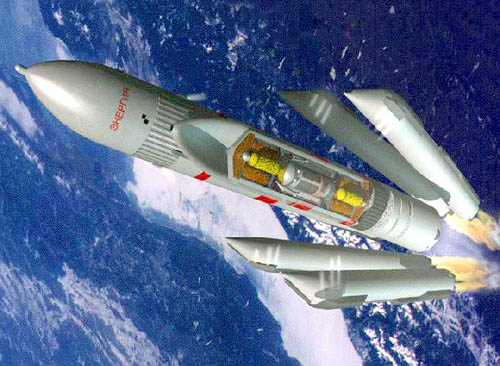 “LUNOX” was to be international in scope, with all the unmanned spacecraft launched by giant Russian “Energia” boosters. The Russians would pay for the Energia rockets and associated “Block 14C40” upper stage while the U.S. would pay for developing most of the flight and lunar surface hardware and transport international crews to the Moon. The Americans would use a Shuttle-derived heavy lift launch vehicle for all manned expeditions to the lunar outpost site. This strategy was expected to reduce the total cost to each partner while preserving an independent launch capability; the payloads would be designed to “fit” on both vehicles in case either partner is unable to launch its elements. 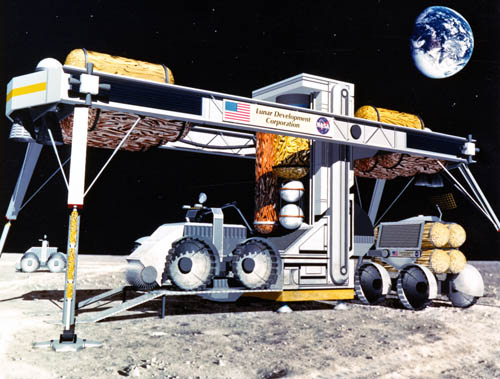 A second unmanned lander delivers six small robotic lunar vehicles, after the LUNOX plant+reactor has been deployed. Two “Loader” bulldozers collect and sort ~500kg/hour of ilmenite-rich lunar soil, which is fed into the LUNOX plant and processed into liquid oxygen propellant. The process is based on H2 reduction of lunar regolith in a fluidized-bed reactor, solid-state high-temperature electrolysis and Stirling-cycle O2 liquefaction and refrigeration. Two “Tankers” transport the liquid oxygen from the LUNOX factory to other users on the lunar surface (the annual production capability is 24,000kg, assuming an extraction efficiency of 4% after benefication). Finally, two “Haulers” are available for moving heavy equipment across short distances. All rovers use regenerable power sources which are recharged from the nuclear reactor surface power supply. 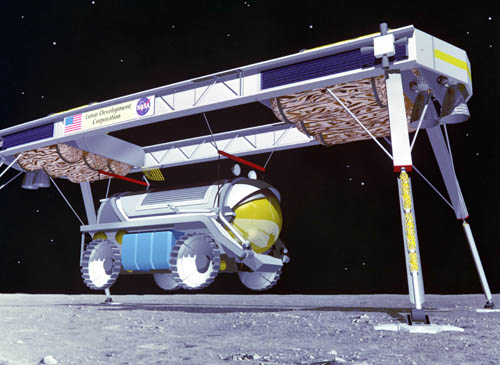 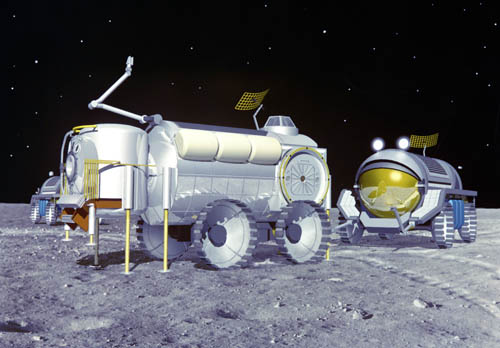 The lunar outpost crew of four astronauts would live in the pressurized rovers. The vehicles would receive auxiliary power, life support and other services from a large support module on wheels, which is delivered on the fifth cargo flight. The support module contains “docking ports” for two rovers and an airlock. It also provides additional habitable volume and space suit maintenance facilities. The life support system does not recycle waste water due to size and weight restrictions. Water is produced by auxiliary fuel cells, which use oxygen produced by the LUNOX system and hydrogen imported from Earth. 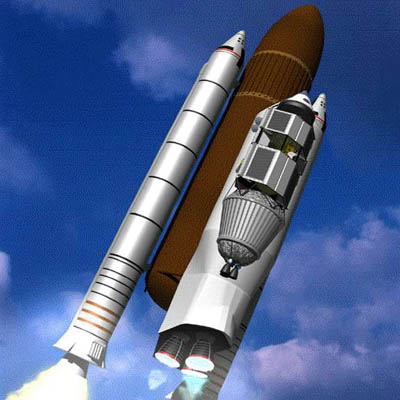 After a sixth unmanned logistics cargo flight has taken place, the stage has finally been set for the first lunar outpost astronauts. The crew of four is carried into space by a “Shuttle-C” type heavy lift vehicle (HLLV). The HLLV would have been relatively inexpensive since it uses mostly off-the-shelf hardware from the Space Shuttle program, but it is not powerful enough to inject a fully fueled manned lunar lander. Therefore, the “Phoenix” lander only carries enough oxygen propellant to land on the Moon. Its tanks will be refueled with oxygen mined from lunar soil by the LUNOX plant. The “Phoenix” weighs only 33,684kg after the translunar injection rocket burn — much less than the original FLO spacecraft from 1992 which weighed 95,000kg. 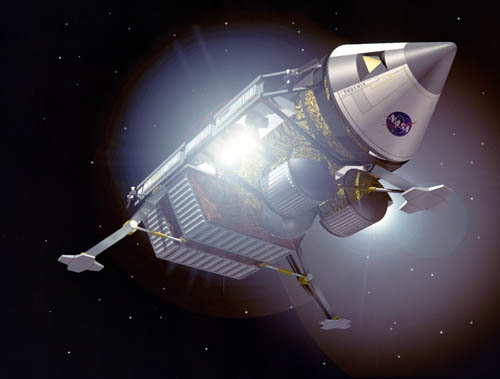 “Phoenix” lands on the Moon

The Phoenix is rather unusual since it features a side-mounted Apollo/FLO type crew capsule for improved pilot visibility during landing, plus centerline propellant tanks and cargo modules for better payload unloading characteristics. The vehicle consists of a single descent/ascent stage since there is little or no performance advantage to Apollo-type separate stages and lunar orbit rendezvous when using lunar-based propellants. The propulsion and avionics systems are common with the unmanned cargo lander.

Like NASA’s “First Lunar Outpost” study, LUNOX would only employ expendable spacecraft and rockets although the lunar surface infrastructure is reused. The first mission would deliver enough consumables for a 2-crew, 14-day mission to accomplish setup, repair or maintenance of the surface infrastructure. Future 4-crew missions of up to 45 days would also be feasible, although the required supplies (crew consumables, experiments, liquid hydrogen for the LUNOX system and fuel cells) must be delivered by a separate unmanned cargo flight. 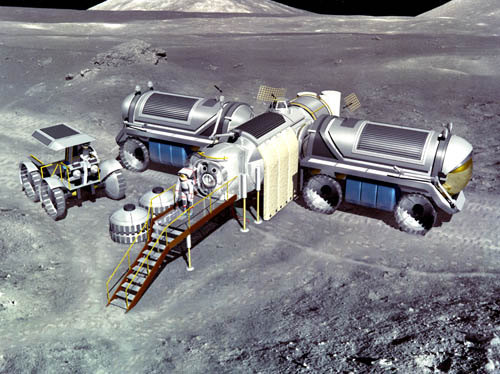 The final “Phase II” configuration is depicted here. The astronauts attach the two pressurized rovers to the supporting node module. Normally, the rovers obtain their power from the LUNOX reactor which is connected to the node. 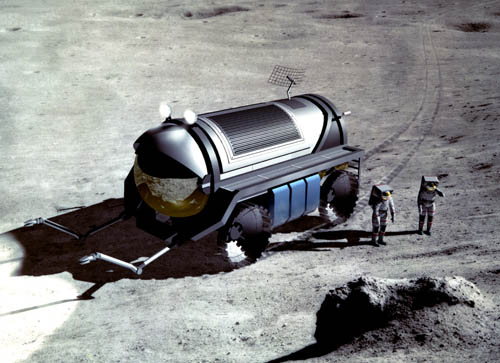 When not attached to the lunar outpost, the rovers could venture hundreds of kilometers from the landing site, enabling a comprehensive survey of the lunar surface. One rover could house all four astronauts in an emergency as a safeguard against catastrophic failure. The Mobile Power Unit-less configuration depicted here would be capable of 2-3 day missions. 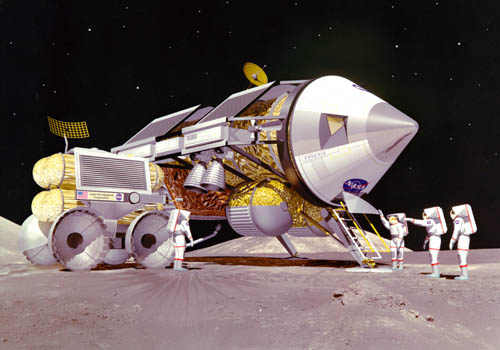 “Phoenix” refueling on the lunar surface

After 45 days of exploring the Moon, the astronauts refuel their landing craft with 10,165kg of lunar oxygen. The rover at left delivers the propellant while a Mobile Power Unit provides “stay alive” electric power to the lander.

This plan assumed a first manned landing in 2005. The total cost was estimated at $19.6 billion in FY 1993 dollars — $22.5B at 1999 economic conditions. The cost of developing lunar oxygen mining equipment would be relatively high, but the required technologies — automation, robotics, lunar surface vehicles, in-situ resource utilization — could have considerable relevance to the American commercial sector. The Shuttle-derived heavy lift vehicle and “Phoenix” lander would be less costly to develop thanks to the LUNOX infrastructure. Each manned lunar landing would cost $1.7 billion (including $550 million for the launcher) and the unmanned landings would cost $1 billion each. In comparison, the 1992 First Lunar Outpost baseline launch vehicle+spacecraft would have cost $4.6 billion and $3.7 billion, respectively. LUNOX would have some built-in redundancy even if the cost-reducing elements of the plan (Energia, lunar oxygen mining) proved unworkable. All cargo elements could be launched on U.S. rockets in case the Russians pull out of the project. Oxygen for the return trip could also be brought from Earth in an emergency, although doing so would increase the launch cost by 50%.

The LUNOX proposal was overshadowed by the International Space Station and NASA’s future Mars exploration plans (“Mars Semi-Direct”). But it did put an end to NASA’s brief obsession (1992-93) with extremely large launch vehicles; future plans would again be based on smaller and more affordable Shuttle-derived heavy-lift launch vehicles. In-situ resource utilization and nuclear power would also be a key part of the agency’s future human exploration plans throughout the 1990s.