Being in space and looking down at the Earth, astronauts are hit with an astounding reality: our planet is a tiny, fragile ball of life, “hanging in the void,” shielded and nourished by a paper-thin atmosphere. This phenomenon is known as the Overview Effect.

Why do we explore? Surely it’s to discover the vastness of something outside of ourselves, something surreal and sublime.

What happens when you put yourself in the position to experience something astonishing? You are simultaneously filled with humility as you bask in the silence and are awed by beauty that is the reality of our planet.

The impossibly significant and insignificant merge as you seek to comprehend the part of the universe that you inhabit. 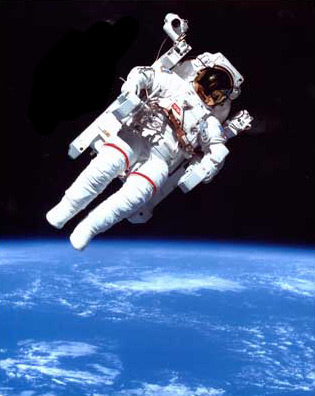 The image of U.S. astronaut Bruce McCandless using a manned maneuvering unit drives this home. Virtual reality can bring this experience to everyone and inspire the next generation of explorers.

Today we are at the cusp of witnessing one of the major technological breakthroughs in Virtual Reality (VR), the next disruptive technology that will redefine the future. It is an immersive experience that makes you feel like you’re physically present in an environment that you are not a part of. You’re transported to a virtual world and the result is spell-binding. It is possible for everyone to have the opportunity to experience the truly infinite, boundless universe that we live in…through virtual reality.

Through virtual reality you will be able to see the entire Earth pass underneath you, seeing exactly what astronauts do. Watch fireworks shoot off the planet on July 4th or a SpaceX Dragon module dock with the station as if you were floating right there!

Space is the final frontier, and everybody should have a chance to be a part of exploring it and, in turn, being influenced by it—to experience the Overview Effect. There’s a lot of excitement about exploring space by the people, for the people, and it will not happen unless people choose to be involved.  Together we can make the universe accessible to everyone, inspire the next generation of explorers and get people excited about STEAM (Science, Technology, Engineering, Art and Math) fields.

SpaceVR is a San Francisco based start up working on sending a virtual reality camera to the International Space Station for everyone to experience what it’s like to see the world like an astronaut.  They plan to use 360-degree cameras placed in the International Space Station’s (ISS) Cupola observatory to capture and downlink imagery to Earth so a broader community can experience space travel in immersive virtual reality. From there their future plans include the Moon, asteroids, Mars and beyond. More details on their work can be found on their website at www.spacevr.co.