Part VI: To the Asteroids 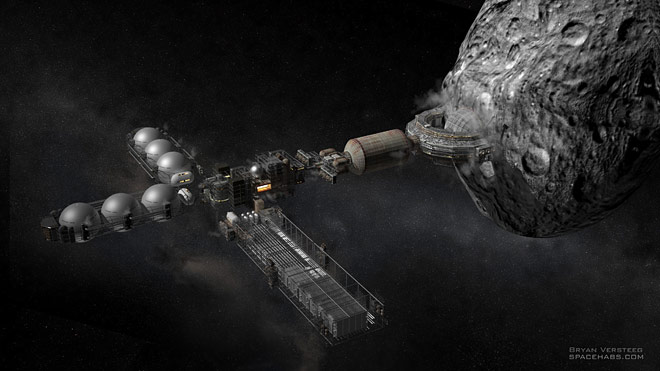 After robotic identification of suitable asteroids, robotic and human crews following to establish mining bases and habitats for transients, and, eventually, carving out and building permanent human settlements.

Asteroids have huge mineral wealth, if it can be accessed. There are different classes of asteroids with varying amounts of metals, nonmetals and volatiles that would be useful both on Earth and in space. That potential value may be the primary driver for asteroid exploration and mining.

Robotic missions will confirm the composition of different types of asteroids. As space transportation systems become more robust, long-duration crewed follow-up missions will confirm earlier discoveries and begin the process of mining and harvesting these materials and returning them to Earth. As is expected to be the case on Mars, crews will convert deposits of volatiles to rocket fuel and oxygen, thus enabling further exploration before returning home.

In time, these asteroids will see more permanent habitats created, probably dug into the interior for radiation shielding. These habitats will house either visiting crews or, if there is sufficient mining to be done, permanent occupants, or at least occupants staying for long times.

To the extent the lack of gravity turns out to be an unacceptable condition or insurmountable barrier, colonies using centrifugal force to create artificial gravity may be built in caverns inside the most valuable solid asteroids. Alternatively, in a rubble-pile asteroid, a rotating settlement with a non-rotating shell could be buried just below the surface for radiation protection.

With an appropriate asteroid, these mining stations may go through the same processes of growth as settlements on the Moon and Mars and evolve into permanent settlements, where people will raise their children and live out their lives, as on any far frontier.