More on Richard Branson in Space 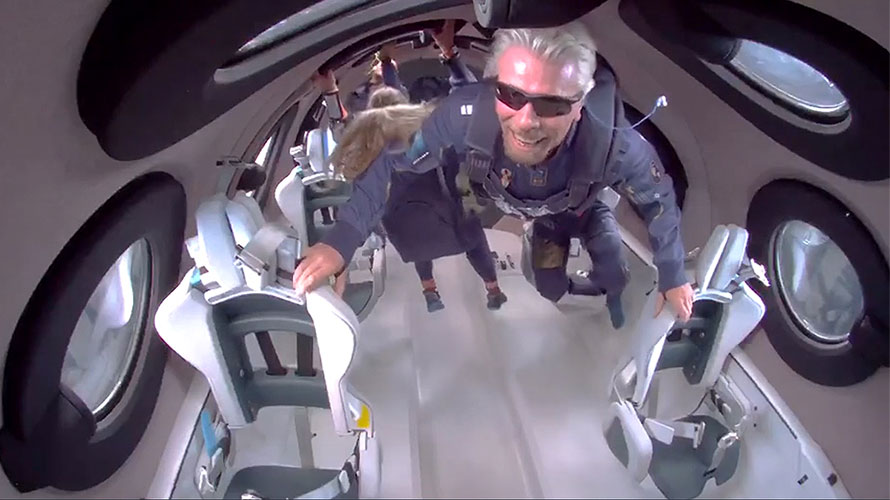 This fourth test spaceflight was the first fully crewed

Realizing a boyhood dream, Sir Richard Branson, founder of Virgin Galactic, rocketed to space yesterday morning, Sunday July 11, on board the company’s spaceplane VSS (Virgin SpaceShip) Unity. With him were three employee mission specialists and the two spaceplane pilots, making for a total crew of six people in the cabin. This fourth flight to space commenced at about 8:40 am when the carrier aircraft VMS (Virgin MotherShip) Eve took off from a runway at New Mexico’s Spaceport America. Forty-five minutes later at 46,000 feet the pilots of the mothership Eve released the spaceplane. Unity’s rocket motor was immediately ignited and propelled the craft in a vertical climb at a speed of Mach 3 to an apogee of 53.5 miles (282,000 feet; 86 kilometers), high enough to earn Branson his U.S. FAA astronaut wings. In a video taken at apogee Branson said, “I was once a child with a dream looking up to the stars. Now I am an adult in a spaceship looking down at our beautiful, beautiful Earth. For the next generation of dreamers, if we can do this just imagine what you can do.”

The pilots guided VSS Unity in a smooth glide back to a safe landing at the spaceport after about a 14-minute flight. The test flight was dubbed Unity 22 to recognize the numerous non-space test flights that were performed prior to the most recent four test spaceflights. After two more test flights and planned maintenance on the vehicles, regular spaceflights with paying “spaceflight participants” (space tourists) will start in early 2022.

After a long seventeen years of development, including a tragic in-flight mishap along the way, this flight was indeed a momentous occasion for Branson, for Virgin Galactic, and for Spaceport America. As such it was quite the media production with live video streaming including choreographed entrances and scenes, narrators including Canadian astronaut Chris Hadfield, live music for spaceport guests, and even satirist Stephen Colbert as an emcee of sorts.  Elon Musk, founder and CEO of SpaceX, a non-competitor in the suborbital tourism market, also showed up at the spaceport to cheer on Unity’s flight. There’s no question this was the suborbital space tourism event with the most worldwide media coverage ever. The complete two-hour recording of the livestream can be viewed at Virgin Galactic’s YouTube channel.

In late May, after the previous spaceflight (Unity 21), Virgin Galactic announced there would be three remaining test flights prior to flying paying customers, the second of which would have Richard Branson on board. On June 7 Jeff Bezos announced he will fly with his brother Mark on the previously announced July 20 flight of Blue Origin’s New Shepard/RSS First Step suborbital rocket system, their first crewed flight, along with the winner of the auctioned customer seat. On the same day Branson congratulated Bezos and said it is “extraordinary” that both of them are opening access to space.

Certainly, the suborbital space tourism business is competitive as expected. With some friendliness perhaps. It will be interesting to see how Blue Origin further promotes their July 20 spaceflight with Jeff Bezos, his brother Mark, “Mercury 13” Wally Funk, and the winner of the costumer seat auction ($28M).

Though a full crew of six flew to space on yesterday’s Unity 22 mission there were no paying customers in the cabin. There will be two more test flights for Virgin Galactic before commencement of flights with some of their 600 paying spaceflight participants in six or more months, that is, in early in 2022. Meanwhile Blue Origin will have one paying participant, the auction seat winner, on their very first crewed flight on July 20. However, they have not yet started ticket sales nor announced the pricing for regular seats. So while it is obvious we are finally very close to the commercial start of suborbital space tourism, perhaps yesterday’s spaceflight of VSS Unity and Blue Origin’s upcoming New Shepard spaceflight are more like the bugle call announcing the imminent beginning of a horse race, and for the jockeys to mount their steeds, just a few moments prior to the firing of the starter pistol at the starting gate.

In the end success for both firms is success for all of us in permanently opening space for all humanity.