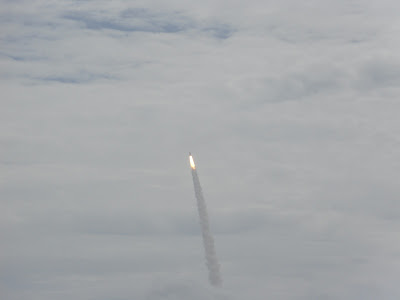 It has been six months since the launch of STS-135. I was there. One of my good friends, Will, and I showed up to Rotary Riverview Park in Titusville, FL around 1 a.m. We secured the last parking space and happily camped out, awaiting what we thought would be a significant delay. The weather was rainy and gusty; I was sure the shuttle wouldn’t leave that morning, but I figured, hey, why not try? During our wait, we chatted with some Titusville old-timers and new visitors to the area, all there to see the 30-year-old space shuttle program wind its way to a close. I was 33. The shuttle program flavored my formative years immensely.

We were surprised – the rain stopped and the storm clouds abated. Everything turned out beautifully. Around 11:26 a.m., we saw those main engines light up for the last time. Atlantis was on its way into space. The shuttle’s flaming boosters soon disappeared into the cloudy mid-summer morning sky. As the shuttle arced overhead, we heard the incredibly loud sound of the vehicle going hypersonic. Words can’t really describe that auditory experience. It was one of those most overpoweringly emotional moments of my life.

Apparently, I’m still not over it. I have dreams in which I see night launches from my apartment in St. Petersburg. I miss the twin sonic booms as the shuttles would make their way back to KSC. I am still coming to terms with the fact that I won’t hear them again in my lifetime. It makes me feel sad.

One of Atlantis’ booster casings was from STS-1, the first shuttle mission, which launched the program in 1981. I also feel inexplicably sad that John Young won’t ever see space again, for some reason. John and Bob Crippen were pioneers in the truest sense of the word and I really miss that era of exploration; we won’t experience that level of excitement again. I am aware that new launch vehicles are being developed – but for us living in Florida, the space shuttle experience was something utterly special and inescapable.

So yeah, as silly as it seems, I realized that I’m still mourning the loss of the shuttle program all these months later. This particular week is always difficult for space buffs (Apollo 1, Challenger, Columbia, etc.). I saw the final minutes of Challenger with my own eyes in the schoolyard as a kid. I miss those astronauts, too. January reminds me of the losses we’ve grown to accept over the years during the space program. The end of the shuttle program, despite the vehicles’ age, was also a loss whether we want to realize it or not.