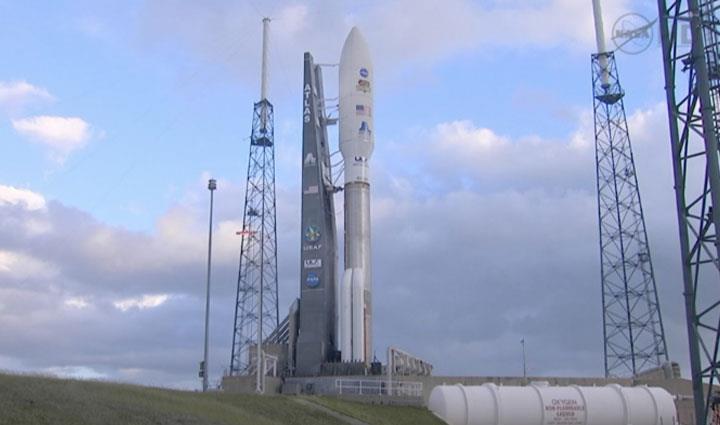 MSL and its Atlas V on the launchpad this morning. Picture from Kennedy Space Center on Facebook.
8:41 a.m.: Okay, I am here. We are 1:10 away from the opening of the launch window. Right now, liquid oxygen is being loaded onto the rocket’s Atlas stage. Catch all televised updates at http://www.spaceflightnow.com/atlas/av028/status.html online.

8:51 a.m.: My name is one of the many being sent to Mars via a microchip today. So awesome. A piece of me will go interplanetary!

9:05 a.m.: So far, weather conditions are “green.” Liquid hydrogen is being loaded onto the rocket’s Centaur and Atlas stages. No technical problems so far (fingers crossed).

9:07 a.m.: My buddy Heather at Pillow Astronaut explained the way the Mars Curiosity rover will have to land when it reaches Mars…the payload weighs approximately one ton. Dang. In comparison, 1976’s Viking lander looks like a kid’s Big Wheel. Thanks Heather 🙂

9:14 a.m.: Fueling is almost complete. The Atlas V rocket is being fueled with hydrogen and oxygen, which also helped to power the space shuttle.

9:17 a.m.: 35 minutes and counting! The view of that beautiful rocket by the water is unbeatable.

9:20 a.m.: Another wind balloon is being launched at T-31 minutes to assess the wind conditions.

9:25 a.m.: A weather briefing will take place soon. It’s kind of breezy today but that’s no cause for alarm…

9:32 a.m.: 19 minutes away with some holds, etc., planned. A weather briefing will take place in a few minutes. All safety checks have taken place. So far, so good.

9:36 a.m.: From MSL’s Twitter account:  “Fuel fill sequence initiated. Top off the tank, guys. I hear there are no service stations en route to Mars.”

9:48 a.m.: In first planned hold at four minutes. This final hold before launch will last for 10 minutes. Waiting for flight readiness statuses. Hold will be released in a few minutes. That was quick!

9:55 a.m.: What I like to hear – everything is GO. We have permission to launch! MSL is on internal power and so far is ready to go! So excited!

9:58 a.m.: Less than four minutes. No offense…if it launches you’ll hear about it afterwards. I just want to enjoy the view.

10:07 a.m.: WOOT! It went off flawlessly…now we are seeing the Centaur stage burning.

10:16 a.m.: The spacecraft is now in a coast phase along the Earth for the next 19 minutes or so until the Centaur burns again to send MSL into an interplanetary trajectory.  Watch NASA TV online to see replays of the launch. I should have a launch video up later today. Everything looks good and NASA did it yet again. What a great year for space! 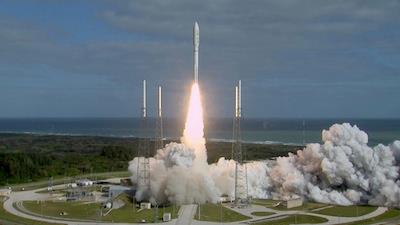