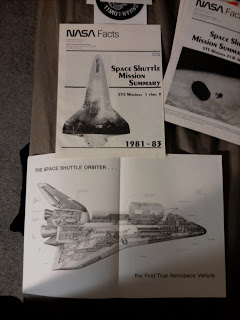 Part of a package I received from NASA in the 1980s. Pictured: a synopsis of the early shuttle missions, and a space shuttle schematic poster. Photo by Emily Carney.
Given that the final space shuttle launch (Atlantis, STS-135) is scheduled on July 8th, I’ve been feeling pretty nostalgic lately about the halcyon days of the space shuttle program from 1981 to 1985. When I was a tiny space nerd in the early 1980s, I sent a fairly rapturous letter to NASA asking raving about how awesome I thought the space program was, how I wanted to be an astronaut, etc. etc. It probably was no different in content from any other letter from a typical spaceflight-obsessed kid. In response, they quite generously sent me a package crammed full of space shuttle related documents and launch vehicle schematics. I still have all of this material at present time; a small sample is pictured above.
Not pictured here is a pretty curious looking enclosure that I probably didn’t look at as a child, because it wasn’t as fascinating to me yet as previous accomplishments like Apollo, Skylab, and the shuttle, and also it seemed somewhat impossible that such a thing could exist at the time (the mid-1980s). It was a schematic and description by McDonnell Douglas of a space station which the shuttle would be able to dock with. Although I didn’t realize it at the time, I had been looking at an early prototype of the International Space Station, and I didn’t even know it, or appreciate it. Unsurprisingly, NASA would once again make the seemingly impossible happen, and we got our fortress in space. 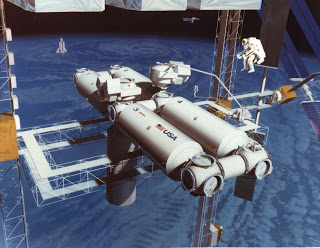