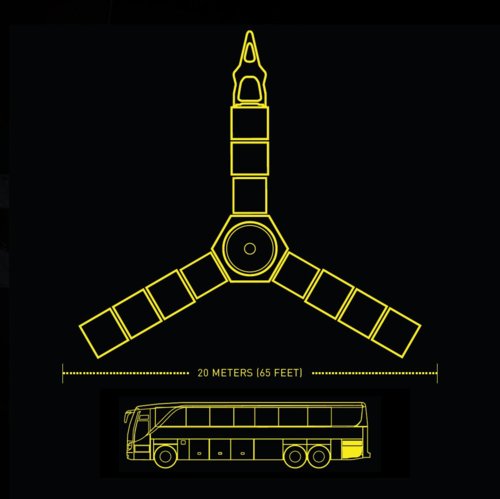 Juno is a solar-powered space probe, unlike its Pioneer and Voyager ancestors which were powered by radioisotope thermoelectric generators (RTGs). Scaled image provided by NASA. 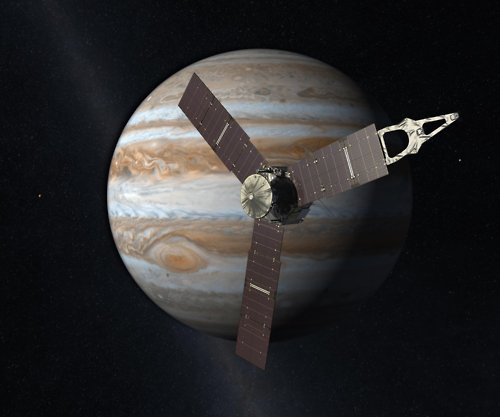 Artist’s depiction of the Juno spacecraft as it approaches Jupiter. NASA image.
On August 5th, NASA will launch the Juno spacecraft using an Atlas V launch vehicle. This spacecraft will take a five-year trek to Jupiter. Why Jupiter? As it turns out, Jupiter may shed some light onto Earth’s origins.
According to NASA, here are Juno’s mission objectives (as set forth on NASA’s Web site):
“Specifically, Juno will…
Juno should make it to Jupiter by July 2016. The spacecraft is scheduled to make 33 orbits around Jupiter’s poles; then, it will crash into Jupiter.
I am very fortunate to have been invited to the Mission Juno Tweetup at KSC next week; many, many thanks to NASA for making a nerd girl’s dreams come true. To say I’m excited is an understatement! For updates about the Tweetup, check out the Tweetup account on Twitter. Also, Juno has its own Twitter account providing updates. I will be providing my own updates and commentary during the Tweetup activities when I am there next week. Did I mention that the entire event culminates in seeing Juno launched? Did I mention I am excited…? What?
Also, if you have an Android phone, you can follow all of the space-y goodness on NASA’s new app. It’s free through the Android market, and it’s a thing of beauty. You can even watch NASA TV via this app. These smartphones, what can I say…they’re crazy these days.

Photos provided by It’s Full of Stars on Tumblr. Thank you!