NSS congratulates Orbital ATK (Cygnus), Sierra Nevada (Dream Chaser), and SpaceX (Dragon 2) for being selected to provide cargo services to the International Space Station as part of the Commercial Resupply Service 2 (CRS-2) contract. Orbital ATK and SpaceX, the CRS-1 cargo providers, are joined for the first time by the Sierra Nevada Dream Chaser winged orbital vehicle. The CRS contract covers the delivery of supplies to the ISS, disposal of ISS waste, and the return of scientific samples from the ISS. The new contract provides a minimum of six missions to each of the three winners during the period 2019-2024. A NASA spokesperson said, “NASA’s service contracts to resupply the space station have changed the way the agency does business in low-Earth orbit. With these contracts, NASA continues to advance commercial spaceflight and the American jobs it creates.” 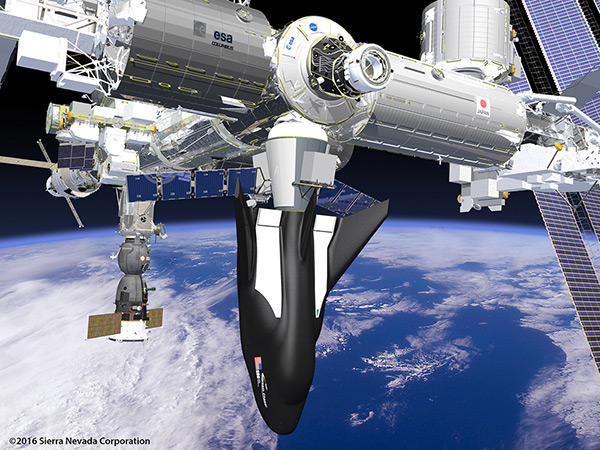 “This announcement represents a major forward advance for NASA and the CRS program,” said Dale Skran, NSS Executive Vice President. “Both Orbital ATK and SpaceX added significant new capabilities over the first contract. In the new contract, the up-sized Cygnus with new solar panels will be used, and the Dragon 2 offers options for both berthing and docking, along with a rapid return to Earth capacity via propulsive landing. However, the selection of Sierra Nevada and the Dream Chaser means that for the first time since the retirement of the Space Shuttle reusable winged vehicles will be returning from space and landing at Kennedy Space Center.”

The Dream Chaser can deliver up to 5,500 kg of pressurized and unpressurized supplies to the ISS. A runway landing supports low-g force return of fragile samples and equipment, and folding wings allow for the usage of a variety of launch vehicles, although the initial target is the Atlas V. In an area of improvement over the Space Shuttle, the Dream Chaser uses all non-toxic propellants. Finally, the system includes a “trailer” that can be used to dispose of ISS waste.