With a successful launch on July 18 at 12:45 AM EST, 2016 from Space Launch Complex 40 at Cape Canaveral Air Force Station, SpaceX achieved several dramatic milestones on the Commercial Resupply Services 9 mission (CRS-9). In addition to supplies and experiments in the pressurized part of the Dragon, an unpressurized “trunk” houses the 1,028 lb (467 kilogram) International Docking Adaptor (IDA), manufactured by Boeing. The IDA, once attached to the International Space Station (ISS) will be the connecting point for Boeing’s CST-100 Starliner and SpaceX’s Crewed Dragon 2 spacecraft as they bring American astronauts to the ISS on American-built and operated vehicles for the first time since the end of the Space Shuttle program.

Experiments being lofted to the ISS by CRS-9 include a Biomolecule Sequencer that will attempt for the first time DNA sequencing in micro-gravity and a new type of heat exchanger being developed by NASA. CASIS/ISS National Laboratory projects include OsteoOmics, which will use magnetic levitation to increase our understanding of the bone loss that results from osteoporosis, and HeartCells, a study of the effects of microgravity on the human heart, which could improve treatments for heart disease on Earth.

“The CRS-9 delivery of IDA is on the critical path to our future in space,” said Dale Skran, NSS Executive Vice President. “SpaceX continues to break new ground in lowering the cost of going into space, and the return to launch site landing of the first stage is key to eventually lowering the cost of spaceflight. With the successful installation of IDA on the ISS, America will be ready for the next epoch of human spaceflight based on commercial vehicles.” 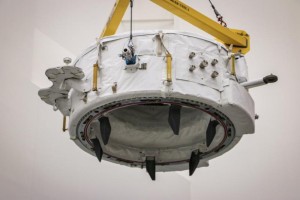 On June 19, 2016 Blue Origin re-used its sub-orbital New Shepard booster on a flight to the Karman line (the edge of space) for the fourth time and returned the rocket to its launch site for further re-use while demonstrating the reliability of the capsule parachute system in the case of a failed parachute. “Competition like that seen between Blue Origin and SpaceX is the key to rapid progress in space,” said Bruce Pittman, NSS Senior Vice President. “Today’s launch of IDA to the ISS and the successful RTLS [return to launch site] landing is a direct result of the competitive, commercial nature of CRS and Commercial Crew, and NSS advocates extending these types of programs into cis-lunar space.”

Lowering the cost of access to space is fundamental to NSS’s vision of our future there (see www.nss.org/settlement/roadmap) and today’s events have brought that future materially closer.