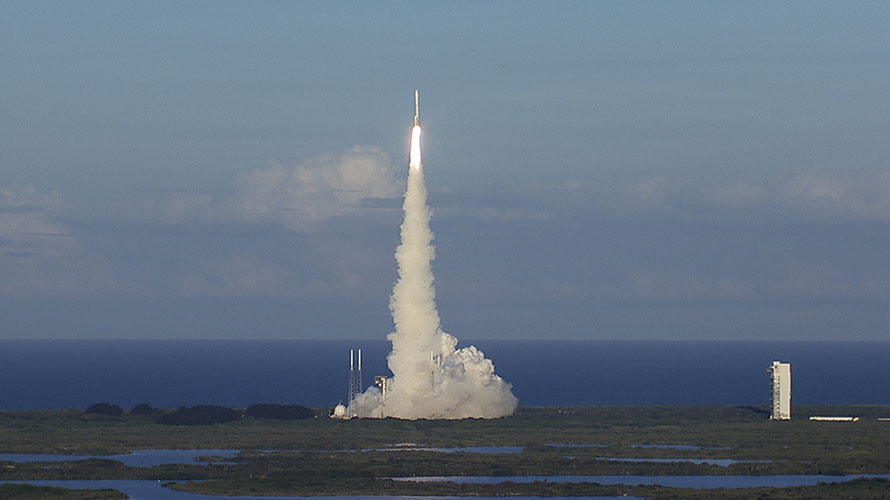 With the successful launch of a United Launch Alliance Atlas 5 411 on September 8 at 7:05 PM EST, 2016 from Space Launch Complex 41 at Cape Canaveral Air Force Station, Florida, NASA’s mission to travel to a near Earth asteroid and return a sample got underway. NSS congratulates the team who made this happen. OSIRIS-REx stands for Origins, Spectral Interpretation, Resource Identification, and Security-Regolith Explorer.

“OSIRIS-REx has NSS members really excited,” said Bruce Pittman, NSS Senior Vice President. “The craft will provide a complete map of the chemistry and mineralogy of a carbon based asteroid. Such asteroids will be critical for both the economic development and settlement of space. The TAGSAM sample collection device may provide a foundation for the development of future asteroid mining robots. Dante Lauretta, the OSIRIS-REx principal investigator, and his team at the University of Arizona have put together a really impressive mission.”

The probe is the third in NASA’s “New Frontiers” program of medium-sized exploration missions, and cost about $800 million in addition to launch and operations costs. The Lockheed Martin built spacecraft will journey to Bennu, a Near-Earth asteroid, arriving in August 2018. After two years of study, an innovative sample collection device, TAGSAM, will use jets of nitrogen gas to assist in collecting a minimum of 60 grams of samples.

OSIRIS-REx will leave Bennu in March 2021, and arrive back at Earth two and a half years later. The sample return canister is targeted toward a parachute landing at the Utah Test and Training Range on September 24, 2023. Although the primary mission objective is to return to Earth a pristine sample of a carbon rich asteroid for analysis, other objectives focus on resource identification, planetary security, and regolith exploration. Other “New Frontiers” missions include Juno, which is currently orbiting Jupiter, and New Horizons, which flew past Pluto in July 2015 and is now heading toward another object in the Kuiper Belt, with an expected arrival in January 2019.

Additionally, OSIRIS-REx will measure the effect of sunlight on the orbit of the asteroid, allowing the risk of an asteroid hitting the Earth to be better understood. “NSS advocates increased U.S. spending on protecting Earth from passing asteroids and comets,” said Dale Skran, NSS Executive Vice President. “OSIRIS-REx is a major step toward achieving the goals set forward in the NSS position paper on Planetary Defense.

Development of asteroid resources is fundamental to NSS’ vision of our future in space (see our Roadmap to Space Settlement Milestone 18 “Exploration, Utilization, and Settlement of Asteroids”) and yesterday’s events have brought that future materially closer.