On December 6, 2015, at 4:44 pm EST, a United Launch Alliance (ULA) Atlas V rocket launched an Orbital ATK Cygnus cargo spacecraft to the International Space Station (ISS) as part of the NASA Commercial Resupply Services contract. This is the fourth operational flight of the Cygnus to the ISS, and the first using an Atlas booster. This is also the first flight of the enhanced Cygnus freighter, now featuring a greater payload capacity, new solar arrays, and new fuel tanks. This Cygnus capsule has been named the SS Deke Slayton II after Mercury 7 astronaut Deke Slayton,the first Chief of NASA’s astronaut office, who flew on Apollo-Soyuz. 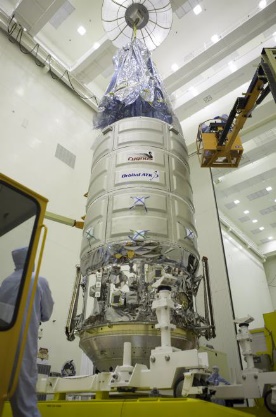 “NSS applauds ULA and Orbital’s success in launching the Cygnus freighter on a different booster than originally targeted to maintain service to the ISS,” said Dale Skran, NSS Executive Vice President. “This has never been done before, and represents a significant step toward reliable support of the ISS.” Cygnus is planned to berth with the ISS in three days carrying 7,000 lbs of equipment and supplies. The enhanced Cygnus can carry up to 2,630 lbs more than the older version. Experiments being carried to the ISS on Cygnus include the Packed Bed Reactor Experiment (PBRE), the Space Automatic Bioproduct Lab (SABL), and BASS-M (Burning and Suppression of Solids-Milliken). In addition to delivering the Cygnus to the ISS, 18 small satellites, including 12 Planet Labs Flock-2e Earth observation satellites, will be deployed on this mission.

“Orbital ATK and ULA have done a great job working together to allow the enhanced Cygnus to be launched on the Atlas V booster. This flexibility is vital to reliable operations in space,” said Bruce Pittman, NSS Senior Vice President and Senior Operating Officer. “We wish Orbital ATK the best as they move forward toward a return-to-flight using an upgraded Antares rocket next year.”