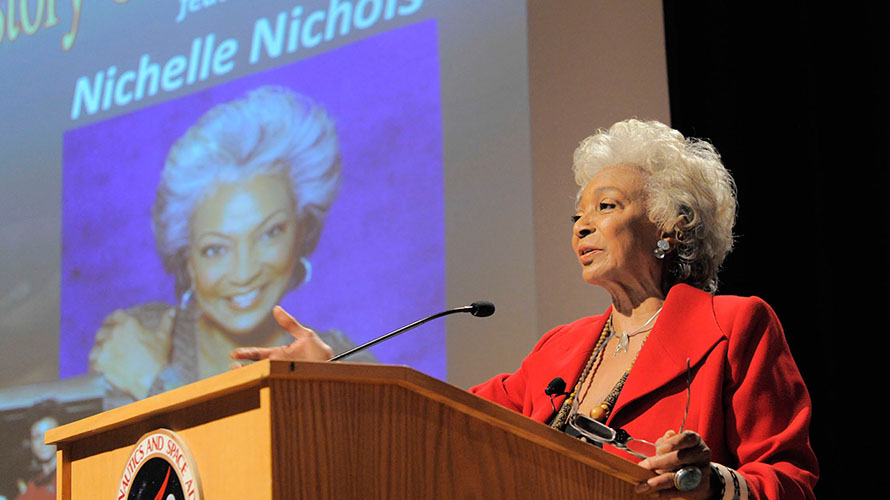 Nichelle Nichols, famed “Star Trek” actor, NASA promoter, and equal rights activist passed away on July 30. Besides her stereotype-breaking role as Lieutenant Nyota Uhura on the original “Star Trek” series and a long roster of Star Trek movies, Nichols worked tirelessly with NASA to promote their mission and recruit minorities to the space agency. She was also a long-time governor of the National Space Society (NSS), a group she actively supported for decades.

“Nichelle Nichols was a trailblazer and role model for women of color, and all women, from the mid-1960s on,” said Michelle Hanlon, President of NSS. “Her portrayal of Lt. Uhura in ‘Star Trek’ allowed both her talent and her dignity to show through, and her work with NASA and the National Space Society was invaluable. NSS sends condolences to her family, and she will be dearly missed.”

Nichols’ role as “Star Trek” bridge officer Lieutenant Uhura was groundbreaking in 1966. After the show’s first season, she felt uncertainty about some aspects of her character, but was personally encouraged by Dr. Martin Luther King to continue her work on the series. In a face-to-face meeting, Dr. King told her she was changing the television landscape for people of color, saying that her character was “the first non-stereotypical role portrayed by a Black woman in television history.”

Nichols joined the National Space Society’s Board of Governors in the mid-1980s and was among the most active of that group for a number of years. Her service to NSS is deeply appreciated and was some of the organization’s earliest outreach to women and minorities.

Karlton Johnson, Chairman of the NSS Board of Governors, said, “On behalf of the NSS Board of Governors, my deepest condolences to the Nichols’ family for their loss. Nichelle was more than an icon, more than a role model and much more than just Lt Uhura on the Starship Enterprise. She was one of the brightest stars that have ever shown, and her light will continue to shine in the hearts of souls of many for years to come. Miss Nichols: Rest easy. Your legacy continues.”

Nichols’ outreach efforts on behalf of NASA helped the agency to recruit the first African American women into the astronaut corps in the late 1970s—a group which included Dr. Mae Jamison, who cited “Star Trek” as a major influence in her decision to become an astronaut.

Nichols continued to work in various entertainment venues even after a 2015 stroke, ultimately withdrawing from acting in 2017. Her legacy in science fiction, and with the National Space Society, will live on.