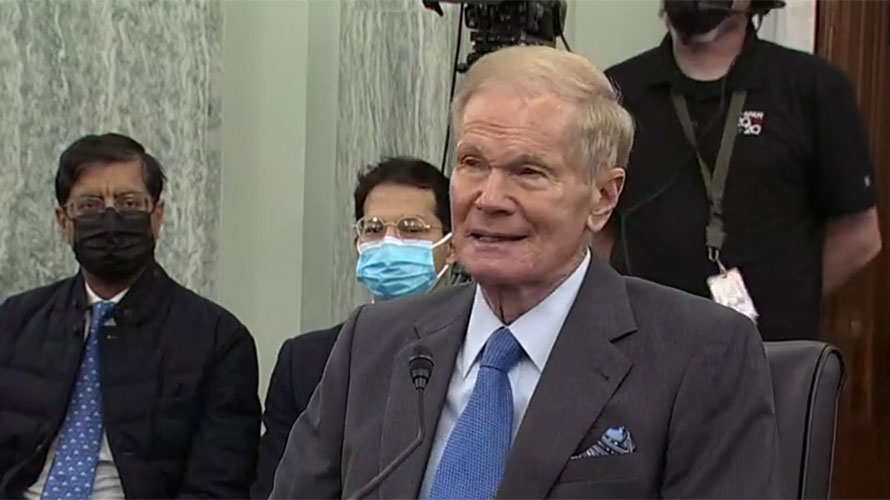 “Today’s hearing was a fine example of the American political system finding the right person for the job,” said Anita Gale, CEO of NSS. “Between his wealth of political experience and his background flying on the space shuttle, Nelson understands the importance of leading the way in space for our country.” Gale was previously an engineer on the space shuttle program.

NSS Chief Operating Officer Dale Skran underscored the importance of political leadership at the space agency. “Having a person with political experience at the helm of NASA is critical in times like these. Bill Nelson, like Jim Bridenstine before him, brings a wealth of political experience, perhaps the most since Jim Webb of the Space Race years, to the position. This is critical for advancing NASA’s goals in the near term, and the goals of NSS in the long term—the human settlement of space.”

Notable among Nelson’s comments during Wednesday’s hearings were his backing of the selection of SpaceX as the sole contractor for NASA’s Human Landing System to take American astronauts back to the Moon while supporting multiple competitive contracts in the future. He also voiced his support for NASA to adhere to the 2024 deadline for the first lunar landings but admitted that it will be a challenge. “Space is hard,” Nelson said.

“In the end, everyone wins when there is competition and redundancy in the system,” said Jeremy Wainscott, NSS Executive Vice President. “We hope Congress will send NASA sufficient funding to support a second contractor to provide assured and safe access to the surface of the Moon by our astronauts.”

Michelle Hanlon, President of NSS, commented, “Nelson is a true friend to space exploration and development. With vociferous support from both sides of the aisle, today’s hearings once again demonstrated that space is nonpartisan. NSS is gratified to know that he will continue to support robust partnerships between NASA and commercial operators like SpaceX and Blue Origin, who have skin in the game and are saving taxpayers many millions of dollars. We look forward to learning more about Nelson’s support of the broader goals of human exploration and supporting the human expansion into the solar system—not just to visit, but to stay.”