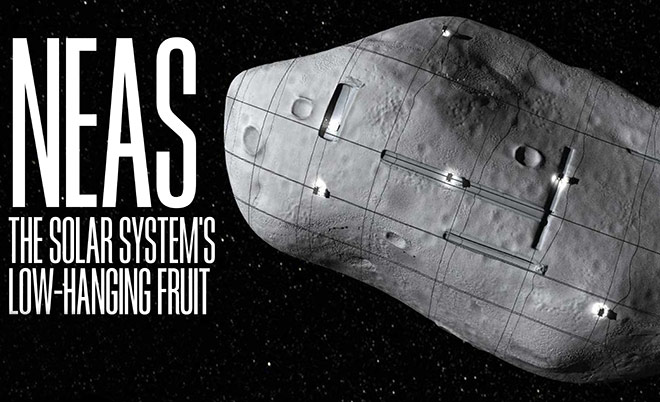 Planetary Resources plans to mine near-Earth asteroids (NEA’s) for raw materials, ranging from water to precious metals. Through the development of cost-effective exploration technologies, Planetary Resources, Inc. say they are poised to initiate prospecting missions targeting resource-rich asteroids that are easily accessible.

“The pursuit of resources drove the discovery of America and opened the west. The same drivers still hold true for opening the space frontier. I’m involved with Planetary Resources Corporation because expanding the resource base for humanity is important for our future.”— Eric Schmidt, PhD, executive chairman of Google and investor in Planetary Resources 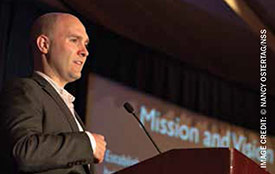 To live in space, people need a way to make a living. They also need to drink water, to grow food, and to make these into rocket fuel. To meet those needs, Eric Anderson (founder of Space Adventures) and Dr. Peter Diamandis (of X PRIZE fame) founded a company called Planetary Resources. With the backing of billionaires, they plan to mine near-Earth asteroids (NEAs) for their precious metals and water. “We chose the asteroids because in our view, they are the low-hanging fruit of the solar system,” Anderson told an enthusiastic crowd at the 2012 ISDC in May.

They readily admit that it’ll cost billions and take years to harvest the first asteroids. But Anderson claims the payoff will be astronomical. Just one typical asteroid contains $7 trillion worth in water and precious metals.

Anderson and his chief engineer, Chris Lewicki, who also spoke at the ISDC, noted that platinum currently fetches around $1,500 per ounce. One 500-meter (1,640-foot) asteroid (that would fit in a large hotel ballroom) contains about $2.9 trillion worth of the metal. That’s 174 times more than the yearly world output of platinum and more than the known world reserves of platinum-group metals.

When asked what happens once the return of a few asteroids floods the market and drops the price, Anderson responded, “I want that problem!” He said that “a world of abundance is one where platinum can be used in every device that benefits humanity, whether it’s artificial organs or processors that drive medical devices. It shouldn’t be $1,500 per ounce to use the best material. We need to make these materials much more broadly available.” He then encouraged the audience to read Diamandis’ book, Abundance: The Future is Better Than You Think.

Another potentially lucrative asteroid resource is water. This lifesustaining fluid currently costs about $40,000 per 2-liter soda bottle to haul to orbit. At those prices, one 500-meter asteroid contains about $5 trillion worth of water.

Water is only valuable if there is someone in space who is willing to pay for it. The International Space Station will require servicing at least until 2020, and the Chinese may have a permanent Tiangong space station by then. Other potential customers include satellite operators who may opt to refuel their satellites with hydrogen and oxygen derived from asteroids rather than build and launch replacement units.

But Planetary Resources’ plans go way beyond servicing government assets. They hope to establish “gas stations” in space to service multiple private and government space ventures. Anderson said, “I think that propellant depots strategically placed throughout the solar system are a key capability. No matter what the launch vehicle is, you can always take more to where you’re going in deep space if you’ve got a gas station out there.”

Space settlements will naturally evolve near these fuel depots in the way that New York and Houston grew up around shipping ports. Anderson said: “The materials and the resources and energy effectively contained in the NEAs are an essential element of getting millions of people into settlements off the planet, whether it’s on Mars or the moons of Jupiter.”

The primary roadblock to space settlement has always been the cost. Even if the new commercial rockets bring launch costs down, sending spacecraft to asteroids and learning how to process materials in space are going to be expensive.

Fortunately, Planetary Resources has what Anderson calls “the dream team” of space financing, including Eric Schmidt and Larry Page of Google, Charles Simonyi, formerly of Microsoft, and Ross Perot, Jr. But he doesn’t expect to run the company off their largesse. “We’ve set a goal for ourselves,” he said, “in fact a demand, from the very beginning to be cash-flow positive, to be profitable so we can sustain our company, even though we have billionaire investors. We don’t want to be dependent on NASA budgets or the ups and downs of the stock market.”

First, they will keep expenses down. Anderson said, “We’re not going to hire a thousand people right off the bat. We’re going to bite off pieces that we can chew.”

In keeping with this philosophy, the company started with a small business technology transfer award from NASA in 2011 to study laser communications. They hope to utilize this new technology to reduce the size of their spacecraft communications (Voyagers had 50-foot long antennas) and also to spin off to raise capital.

Their architecture also includes sending swarms of spacecraft using distributed processing so that “even if you lose one, you’re still going to be successful.” First up will be the no frills Arkyd-100 space telescopes, expected to launch into low-Earth orbit as early as late 2013. “We’re going to make these things Fords, not Ferraris,” Anderson said. It is the hope that eventually the 65-110 lbs (30- 50 kg) “eyes” will cost around $250,000 each and won’t carry a propulsion system.

Although some 10,000 NEAs have already been discovered, scientists estimate there are up to a million more waiting to be found. The Arkyd-100 series will discover more mining targets as well as locate potential threats to Earth, in what Anderson jokingly referred to as the “MasterCard part” of the mission (which is, like the commercial says, “priceless.”) 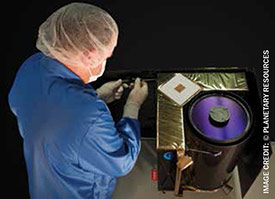 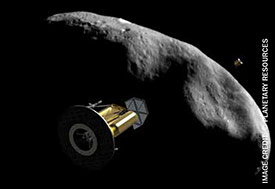 The Arkyd-200 and then 300 series will launch in the years following. “The Arkyd-200 series has some of the components that will enable us to go into deep space,” Anderson said. The Arkyd-300 series will add propulsion, communications, radiation hardening, and the ability to work in a distributed environment. To hearty laughter from the ISDC crowd, Anderson said, “As launch costs come down, we’ll be sending these things out into the Solar System like [Star Wars] imperial probe droids!”

In addition to marketing the new optical communications system that they hope to have ready by 2017, the company expects to make back some of its costs by selling data. “There are hundreds of millions of dollars per year being spent by space agencies [to study asteroids],” Anderson noted. “We would love to be able to go to those space agencies not that many years from now and say, ‘Look, we can do 90 percent of what you would like to do for 1 percent of the cost.'”

After the best targets have been identified, spacecraft will survey their composition, return samples for analysis, and finally, extract and return materials to Earth or designated fuel depots positioned throughout the solar system.

When asked about the legality of selling extracted asteroid resources, Anderson said, “We’re quite sure that the Outer Space Treaty allows for private companies to take resources from asteroids and use them. Having said that,” he added, “there will undoubtedly be evolving legal structure for this enterprise. We want that.”

During the question and answer period, a high school student asked what he should expect in 15 years. Anderson said, “I hope that in 10 or 15 years, we will have 10,000 to 15,000 people working on mining 10 or 15 different asteroids that are providing 10 or 15 billion dollars each either to the space economy or back to the global economy.”

This thriving space economy may include solar power satellites and human missions to Titan. “For those who want to develop space solar power, asteroid mining will be incredibly beneficial because you wouldn’t have to launch the materials,” Anderson explained. Also, for “any human exploration by national space agencies…we would hope to supply the fuel and materials along the way.”

“It’s all about the vision of the National Space Society,” Anderson concluded. “It’s about settling space.” He promised that “whether you’re scientists or not, we’ll find a way for you to get involved. Come to the website (www.planetaryresources.com), register your name, follow us on Twitter (@PlanetaryRsrcs). This is too important of an adventure, too important of a task not to involve as many people out there as we can.”

Marianne Dyson is an award-winning author and former NASA flight controller. She is on the NSS Board of Advisors, chairman of the NSS Publications Committee, and a founder of the Clear Lake Area/ Houston NSS chapter. www.mariannedyson.com/.