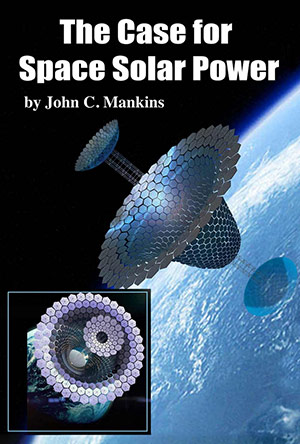 If you, like me, are one of those people who really want to do the most you can “to make the dream real,” you need to have a copy of this book on your shelves so that you can read it, reread it, and go back for all the important details. If you could only afford to have one book on your shelves, this should be it.

This book by John Mankins is a major milestone in doing the work required to translate the National Space Society’s general vision into a concrete reality with a viable business case. The author was the leader at NASA of virtually all the useful work on space solar power (SSP) by the US government in the last 25 years, so this book is a unique and authoritative source. Mankins also led the efforts in human and robotic technology in the first round of Bush’s “return to the Moon” program, and this book tells you a lot about what has been going on in those areas as well. In the final section, the book gets deep into concrete business plan options.

Not only does this book provide the blueprint for providing Earth with limitless clean energy, the book also offers a whole new basis for solid, realistic hope that we might succeed after all in the kind of vision which Gerard O’Neill inspired decades ago, where humans settle space in an economically sustainable way, beaming energy to Earth as part of a growing space economy.

Back in the late 1970s, when there was a lot of hope for SSP but the designs were unproven and questionable, many energy experts walked away and never looked back. In the 1990s, Mankins led the NASA Fresh Look work which exposed what was wrong with the old designs, and found new designs that would work but were still too expensive. When John and I worked together in a National Science Foundation study of enabling technologies for SSP in 2002, the most serious life-cycle cost estimates for the best available designs were still about 20 cents per kwh for the electricity. That was still more expensive than the average we pay for electricity generation today (about ten cents), and it required improvements in launch technology which were not then on the horizon.

But now, in this book, Mankins presents a new design concept, SPS-ALPHA (Solar Power Satellite via Arbitrarily Large Phased Array), for which the best guess on cost is only 9 cents per kwh. This year there is also new hope for launch costs, which is a necessary complement to better design and more realistic costs.

The great beauty of SPS-ALPHA is that it relies on a “Lego” kind of approach, building up a huge structure from modules which all weigh less than a ton. This gets rid of the need for heavy lift vehicles, and we can use whatever gets us to space most cheaply.

Some people may be disappointed that Mankins’ plan for SSP does not provide for many humans in space, but that is part of the plan’s strength in reducing cost. The Mankins plan instead shows the way to build up the infrastructure we need in space before we can have a realistic chance to expand human settlement further. If we fulfill that plan, there will be ever more opportunity and need to bring more and more humans along, step by step, perhaps starting out with a kind of swarm city more like a giant expansion of the International Space Station (but with a net positive revenue flow) than like the habitats we will build eventually.

As a matter of honesty, I have to say that the book does not tell us everything we need to know to make the dream a reality. The book tells us a huge amount about competing designs for SSP, some of which might work out better after ALPHA paves the way. But there are other possibilities in the same design space, such as new ideas from the Naval Research Labs about how to handle heat flow issues within the ALPHA approach, and there are additional approaches to reducing launch costs. Nevertheless, Mankins’ book is the game plan for bringing SSP itself to reality. To make a positive difference in the game, we need to have that game plan close at hand, not just on our bookshelves but in all of our strategic thinking for all of the things we can do to help.

The Case for Space Solar Power is available in hard cover and in an inexpensive Kindle edition from Amazon. If you don’t have a Kindle, there are free Kindle reader apps at amazon.com/kindle-dbs/fd/kcp that enable you to read it on your computer or mobile device.