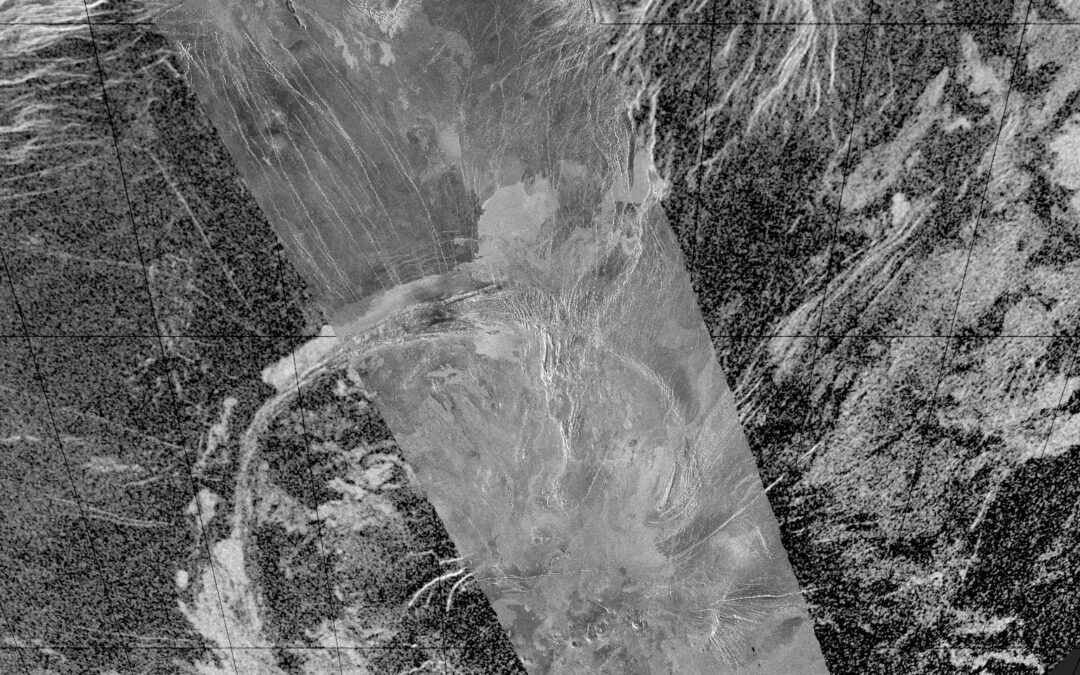 It was an announcement that rocked the astronomy and planetary science community last week: Puerto Rico’s Arecibo Observatory, which has endured significant structural damage, would be decommissioned after 50+ years of service. It seemed a particularly cruel blow, even during a year that pulled no punches. The Arecibo Observatory was essential in discovering features of inner solar system planets, including Mars and Venus. Venus, the truly lesser-understood of the two planets, enjoyed an all-too-brief period of space exploration from the 1970s to the 1990s. Observations from Arecibo, used alongside observations by spacecraft, deepened our knowledge of the “Island of Clouds” (as referred to by author Gerald Brennan).

Most journalists’ stories about spacecraft begin with their launches, but the seeds for Pioneer Venus were sown in June 1970, eight years before the program’s orbiter and multiprobe began their journeys from Cape Canaveral Air Force Station with two successive launches. During this time, it had been noted that no real U.S. program yet existed for Venusian explorations. Enter the 21 scientists of the “Purple Book” report. According to the NASA history volume To See The Unseen: A History of Planetary Radar Astronomy written by Andrew J. Butrica and published in 1996, “In June 1970, to address the lack of a serious Venus mission, the NASA Lunar and Planetary Missions Board and the Space Science Board brought together 21 scientists to study the scientific potential of a mission to Venus. Richard Goody and Donald M. Hunten…co-chaired the meeting. Their report, known as the Purple Book because of the color of its cover, recommended that exploration of Venus should be prominent in the NASA program for the 1970s and 1980s. The group presented its recommendations to NASA management, and the Space Science Board endorsed them.”

The NASA history book is careful to state that the idea of using radar to map Venus’ surface features arose as early as the late 1950s, and the idea for a mission such as Pioneer Venus had been bandied about as early as 1967. Moreover, The Purple Book report, in a move considered “ironic” by Butrica, was pessimistic about using spacecraft-based radar to image Venus’ topographic features because of innovations in ground-based radar astronomy, such as what was then being envisioned for Arecibo’s planned 1970s upgrades.

The Purple Book stated, “Virtually all our present knowledge of the radius, rotation, and surface of Venus has been obtained using ground-based radars…[a spacecraft would be] directly competitive with ground-based observations and would provide similar data.” In addition, the purpose of the Ames’ Venus project was initially defined as more of an exploration of the planet’s atmosphere, and not its geologic features. Indeed, an of-its-era NASA film about Pioneer Venus, complete with a Star Trek-esque soundtrack and loudly-suited scientists, discusses the radar altimeter findings near the film’s end, and focuses more on Venus’ clouds and the multiprobe findings.

Despite these concerns, Pioneer Venus’ radar-enhanced vision moved forward. According to Butrica, the orbiter’s instruments were locked-in by June 4, 1974; a radar experiment won a place on the spacecraft, alongside 11 other instruments. It bears mentioning that the instrument was a radar altimeter that possessed a mapping mode, and was not a synthetic aperture radar (SAR) instrument, such as what was used on the SEASAT satellite, which was launched the same year as the Pioneer Venus Orbiter and Multiprobe. Butrica wrote, “In preparation for the mission, a preliminary map was compiled from ground-based images and used by mission operations for planning. For this map, Goldstone radar images were computer mosaicked, and images obtained at Arecibo were mosaicked from photographic copy. The scale of this map was 1:50,000,000. Once the Pioneer Venus data were in hand, the map was updated to combine the spacecraft and ground-based data.”

The data from the Orbiter and the ground-based observatories being used, in concert, to assemble a more comprehensive picture of Venus’ surface demonstrated how different observatories – whether they were earth-based, or space-based – worked together to achieve one momentous goal: to unveil what was under a planet’s clouds for first time. The Pioneer Venus orbiter ended up mapping over 93 percent of the planet’s surface during its lifetime; while its maps are now largely superseded by maps provided by the Magellan spacecraft and upgraded ground-based observatories (including Arecibo), the vision the Orbiter provided with its data by June 1980 represented a huge upgrade from previously murky images.

The Orbiter also captured images of Venus’ clouds in ultraviolet, confirming that its atmosphere, indeed, could be described as “soup-like.” We could also discuss the Pioneer Venus Multiprobe, which had incredible concept art and saw one of its smaller probes survive for over an hour on Venus’ hellscape of a surface, but that’s a story for another time.

Butrica wrote that by 1972, NASA had developed some interest in using SAR to image Venus: “As a mission concept, Magellan began in 1972, when Danny Herman, the head of NASA Advanced Programs, convened an informal meeting of scientists, including [Pioneer Venus Orbiter Principal Investigator] Gordon Pettengill, NASA engineers, and representatives of several key aerospace companies at the Denver division of Martin Marietta Aerospace, to discuss putting a synthetic aperture radar on a spacecraft to Venus.” NASA Ames and the Jet Propulsion Laboratory (JPL) made separate studies on how to undertake such a mission, and by 1974 the JPL program – which would employ a circular, not elliptical, orbit – was christened Venus Orbiting Imaging Radar, or VOIR. 1978’s SEASAT success, according to Butrica, gave JPL “an edge over its competitors”; thus, VOIR was supposed to heavily employ SEASAT-derived technologies, and would be controlled by JPL.

However, again, it was brought up that upgrades at Goldstone and Arecibo could make such a spacecraft redundant. Herman, of NASA’s Advanced Programs, “emphasized to the initial JPL study group the need to consider the capabilities of Arecibo for undertaking ground-based radar observations of Venus. The chief weakness in the development of the Venus radar orbiter concept, he explained, was the belief held by some scientists that upgraded ground facilities could provide data that was almost as good at a far lower cost…By 1977, range-Doppler imaging of Venus at Goldstone and Arecibo had advanced considerably thanks to the refinement of interferometry techniques and the attainment of finer image resolution.” Arecibo had recently upgraded from UHF to S-band, and was returning images with resolutions “as fine as five kilometers” by 1977.

But by 1978, preparations for VOIR were in full swing, with objectives being set forth for its mission, tentatively planned for a launch via the then-yet-unflown Space Shuttle circa mid-1980s. Several proposals were in work, including one from Pioneer Venus’ Pettengill, who argued that while Venus had been explored by the United States and Soviet Union during previous years, those missions did not focus solely on the planet’s geological features. But by 1981, no proposals, no matter how convincing, carried weight, as VOIR was canceled due to budget cuts. In Butrica’s words, “overlap with Galileo, complication of [Deep Space Network] scheduling, escalated costs, and an opportunity for the Soviet Union to obtain Venus SAR images before the United States” all contributed to the project’s demise.

A less-instrumented descendant of VOIR, the Venus Radar Mapper, rose from the ashes of NASA’s early 1980s slashed budgets, and at one point was to be launched utilizing a Centaur-G liquid hydrogen stage from the Space Shuttle. The Challenger disaster of January 1986, however, ended all hopes of launching during a planned mid-1980s window; in addition, NASA canceled the use of Centaur stages aboard the Shuttle due to safety concerns.

So here’s the Venus Radar Mapper – by this point, christened Magellan – by the numbers:

Despite Magellan’s sweeping accomplishments, the last few years have shown that Arecibo was still eminently useful in exploring Venus’ surface details. A 2017 article written by Jennifer Whitten for the Smithsonian’s Air & Space website detailed how she and other researchers used the mammoth structure to study the planet’s features such as suspected volcanoes, lava flows, and impact crater ejecta. These switched-on, high-resolution explorations by Arecibo, together with the Pioneer Venus program and Magellan, tried heroically to figure out Venus’ mysteries – such as its seemingly impenetrable, lightning-riddled atmosphere, its retrograde rotation, and its pockmarked surface. Let’s hope we are granted worthy successors.

3. Whitten, J. (2017.) “Using a World-Class Telescope to Spy on Venus.” Retrieved from https://airandspace.si.edu/stories/editorial/using-world-class-telescope-spy-venus

Featured Image Credit: “This composite image was created by inserting approximately 70 orbits of Magellan data into an image obtained at the Arecibo, Puerto Rico radiotelescope and shows a geologically complex region in the southern hemisphere of Venus. The region is centered on 65 degrees south, 359 degrees east and is about 1500 x 1500 km (900 x 900 miles) in extent.” NASA/JPL, 1994

Author’s note: On December 1, 2020, the Arecibo Observatory collapsed after 57 years of service.