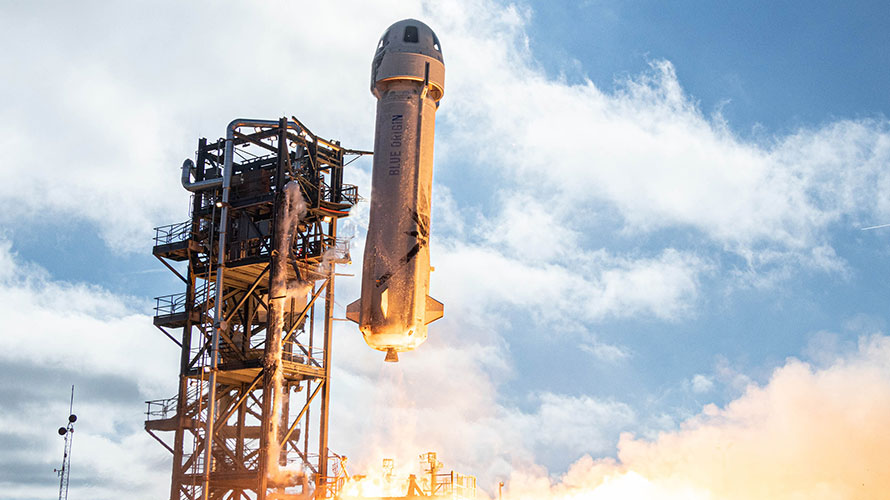 This morning at 8:36 am CST the Blue Origin New Shepard space flight program resumed at the company’s West Texas facility with the successful flight of mission NS-13, the thirteenth consecutive successful flight of the New Shepard suborbital launch system. This flight was the seventh flight of the New Shepard NS-3 rocket booster, setting a new record for the number of times such a booster has been reused. On top of the rocket the commercial payload-only capsule RSS (Reusable Spaceship) H.G. Wells carried a dozen experiments from a range of companies and NASA.

The maximum ascent velocity was 2,232 mph. The capsule separated from the booster at 2.43 minutes at 238,000 ft., and reached apogee at about 4:00 mins. at 346,964 ft., or 65.7 miles, which is above the 62 mile (100 km) internationally recognized Kármán Line boundary of space. The flight of the NS-3 booster itself ended after 7:38 min. when it precisely landed at only 5 mph on its landing pad two miles north of the launch pad. The flight lasted a total of 10:09 minutes from launch with the 13th safe landing of the capsule at 2 mph just several miles from the launch pad. The video replay of the NS-13 flight can bee seen at the company’s website blueorigin.com. The video includes several informative pre-launch video segments.

Perhaps most importantly the mission included the Deorbit, Descent, and Landing Sensor Demonstration from NASA’s Space Technology Mission Directorate under a Tipping Point partnership with Blue Origin. This integrated system of computers and sensors will ultimately allow precise autonomous landing of robotic and crewed missions on the Moon, such as in the Artemis missions or with Blue Origin’s Blue Moon lunar lander, and later on Mars. For the first time ever the NS-13 flight included hardware mounted on the outside of the booster specifically for this lunar sensor experiment. Sensor elements were incorporated into the “fin boxes,” or struts, that hold the ring fin in place at the top of the rocket (see image below).  Jim Bridenstine, NASA Administrator, said prior to the launch (in the video), “It’s critically important [that]..we have these commercial providers like Blue Origin that can fly into suborbital space and help us test these technologies…” at a cost far cheaper than orbital testing or testing on the ISS. 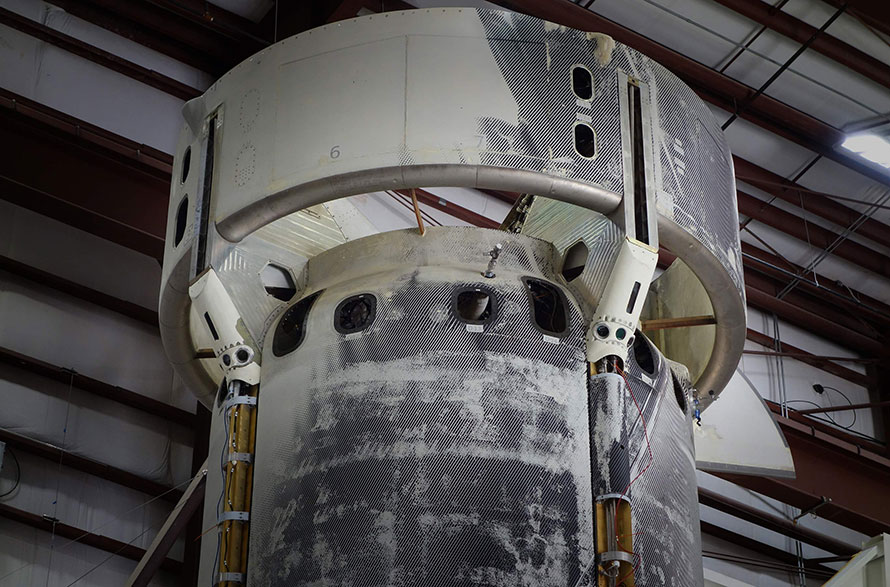 Integration and testing of the lunar landing sensor experiment into the ring fin boxes on top of the New Shepard NS-13 booster. Image courtesy Blue Origin.

Other payloads on board included (among others) experiments for developing an autonomous hydroponic plant growth system for use in low-gravity, testing a system for sampling lunar regolith and anchoring to asteroids which will ultimately support in-situ resource utilization (ISRU), and cooling technology for power-dense spacecraft electronics. Blue Origin has always stated that the New Shepard suborbital program is also a test bed for the development of its New Glenn orbital launch system. To that end the NS-3 booster on this flight included a new type of heat shield on the bottom (aft) part that will be used on the New Glenn reusable orbital rocket.

The previous New Shepard flight, NS-12, also a commercial payload flight with the NS-3 booster, took place nearly ten months ago on December 11, 2019. It was expected then that the first flight with space tourists would possibly take place in 2020. Bob Smith, Blue Origin CEO, said in March 2020 that the company planned to continue New Shepard flights and “We hope to be able to fly people by the end of the year.” In part due to the coronavirus pandemic the flight program was delayed. Indeed, Blue Origin notes that Covid-19 safety measures such as social distancing are incorporated among support personnel.

Prior to today’s launch the live stream once again included video of Blue Origin staff practicing boarding and strapping into the passenger seats of the capsule. Space tourism flights however will use the new NS-4 rocket booster and RSS First Step human-rated passenger capsule. During the video stream today for NS-13 Joel Eby, Blue Origin Creative Director, stated that there will be “a couple more flights” before passengers are carried into space on New Shepard. While the New Shepard system has been operational for payload flights, since the NS-4/RSS First Step assembly has not been flight tested for human passengers it is reasonable to expect that the first New Shepard passengers will fly to space in 2021 instead of this year.

Blue Origin’s suborbital space tourism competitor Virgin Galactic has also had delays impact its Spaceship Two flight test program, in large part due to the move of flight operations to the new Spaceport America in New Mexico, but also due to the coronavirus. The company plans to fly Richard Branson, founder, on its VSS Unity spaceplane as its first space tourism passenger during the first quarter of 2021, after two more piloted non-passenger flights. So now, after a long twenty-month delay, Virgin Galactic expects to resume powered and piloted flight from New Mexico this October 22nd. Presumably one more flight and then perhaps Virgin Galactic will be the first to take a passenger on a suborbital space flight.