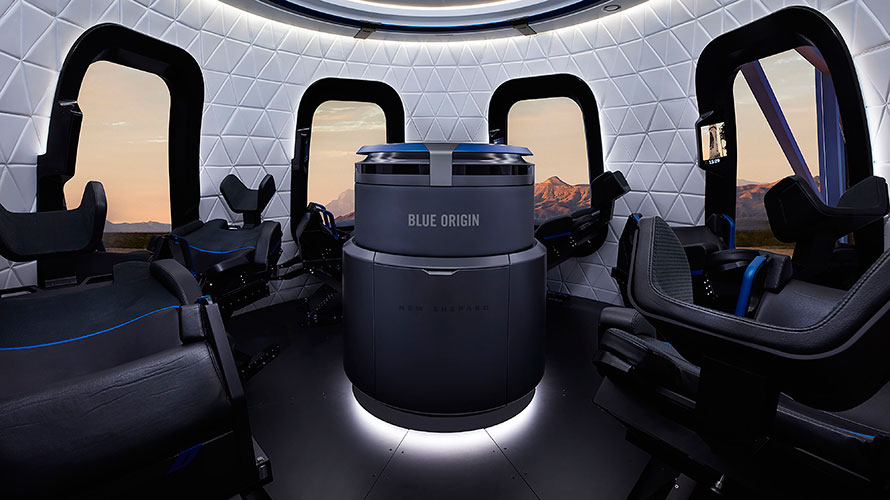 Activities in the suborbital space tourism arena indicate that it is highly likely this business will finally become operational, flying paying passengers to space, this year.

Earlier today at their west Texas facility, Blue Origin successfully launched their 14th New Shepard suborbital flight to space and back. This time, however, the New Shepard assembly consisted of the new NS-4 booster and the new RSS (Reusable SpaceShip) First Step passenger capsule, which together is a human-rated system. This NS-4/RSS First Step system will be the initial system to fly paying passengers.

This test flight lasted a little over 10 minutes with the capsule reaching apogee at 347,568 feet above ground level (AGL). That is 105 km or 65.8 miles, well above the 100 km or 62 mile internationally recognized Kármán Line boundary of space. Both the NS-4 booster, with its 100,000 lb. thrust LH/LO BE-3 engine, and RSS First Step capsule landed safely as planned back at the west Texas facility. As Blue Origin stated post-flight: “This flight continued to prove the robustness and stability of the New Shepard system and the BE-3PM liquid hydrogen/liquid oxygen engine.”

The RSS First Step capsule was outfitted with six passenger seats and upgrades for the upcoming passenger flights. The upgrades included improved sound, temperature, and humidity controls, and speakers in the cabin, as well as display panels and microphones for communication as needed with mission control at each of the six passenger seats. Cooling and carbon dioxide scrubbing systems have also now been incorporated in the capsule.

Once again, the instrumented Mannequin Skywalker occupied one of the seats, experiencing about 3.5 g of acceleration. The only other payload was 50,000 postcards submitted by students from Blue Origin’s Club for the Future.

Interestingly, the NS-4 booster was programmed to begin moderately rotation during ascent so that the capsule, after separation from the booster, would continue to gently rotate in order to give future passengers a 360-degree view of Earth from space while weightless at apogee.

During the video stream for the previous test flight (NS-13) this past October, Joel Eby of Blue Origin stated that there will be “a couple more flights” before paying passengers are taken up on New Shepard. Ariane Cornell of Blue Origin, one of today’s NS-14 flight live video stream narrators, said this morning, “Every program here at Blue Origin has been designed for human space flight from the very beginning. And as for today’s mission as we mentioned we flew some upgrades for the astronaut experience inside this capsule that you see on the screen. So, we’re getting really close to flying humans. We’re getting there.” Let’s hope!