NSS at the Atlantic Council

Dale Skran, Deputy Chair of the NSS Policy Committee,  and Scott Pace, NSS Board of Governors, spoke at “The Final Frontier: Renewing America’s Space Program,” an Atlantic Council event held September16, 2014 at the Newseum in Washington DC.  Governor Jon Huntsman, Jr., the Chairman of the Atlantic Council, opened the meeting.  The first major speech was by Jill Tarter, former Director of the Center for SETI Research, SETI Institute, and the model for the Jodie Foster character in the movie CONTACT.  Along with a call for the search for extraterrestrial life, Tarter supported two major NSS themes: asteroid mining and protecting the Earth from cosmic impacts (see the NSS position paper on this topic).

Scott Pace, Director of the Center for International Science and Technology Policy and Director, Space Policy Institute, The George Washington University, participated in the first panel, moderated by Jeff Foust of Space News (a video of the full 2-hour panel is available on YouTube).  The title of this panel was “Sustaining NASA Human Space Exploration” and much of the discussion was in response to the recent National Research Council report on Human Spaceflight.  Many of the other panel members had been part of the NRC committee that produced the Human Spaceflight report.  A notable panel member was Hannah Kerner, Board Chair of the Students for the Exploration and Development of Space (SEDS), and also of Planet Labs, who made the case for space settlement as the primary horizon goal for humans in space as opposed to the “footprints on Mars” position taken by the NRC report. 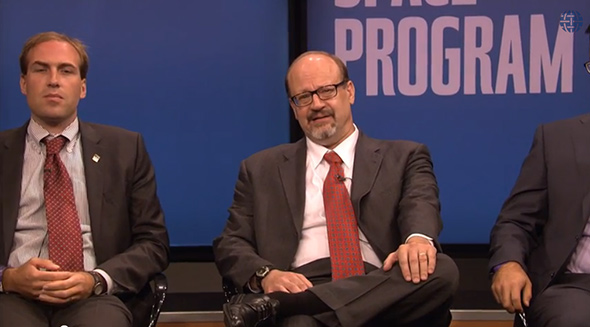