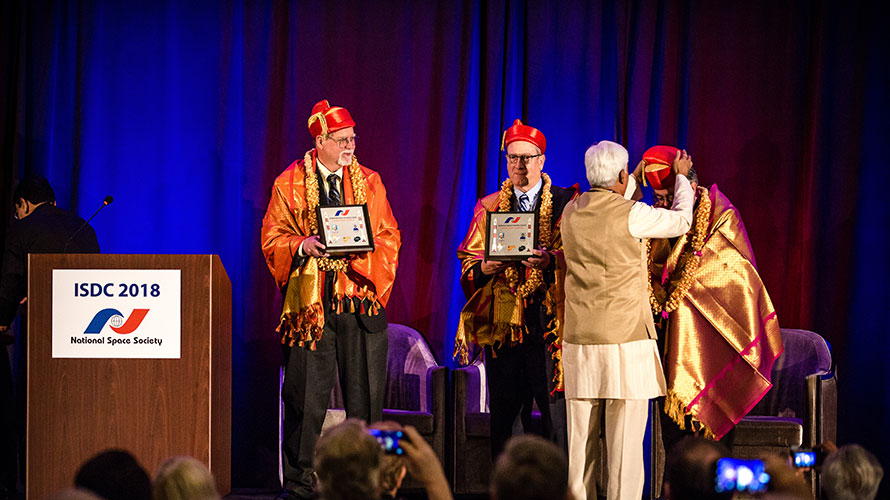 The ISDC 2018 conference kicked off with a Felicitation Ceremony performed by Avinash Shirode, President of the NSS-Nashik India Chapter. Pictured above are Felicitation Ceremony “investitures” for Mark Hopkins (Chairman of the NSS Executive Committee), Bruce Pittman (NSS Senior Operating Officer), and John Mankins (NSS Board of Directors and Conference Chair). As International Chapters Coordinator, I received a similar shawl—but not a hat—later, as I wasn’t able to attend the opening plenary session. Mark Hopkins (also of the OASIS chapter, wore his colorful new regalia during much of the conference, which contributed to a light mood throughout.

After the “outside” portions of Thursday night’s dinner, the Cape Town, South Africa Chapter (our newest), North Houston Chapter, and NSS Japan chapters were introduced. Then any NSS chapter members present were asked to stand. Finally came the NSS Individual and Chapter awards. 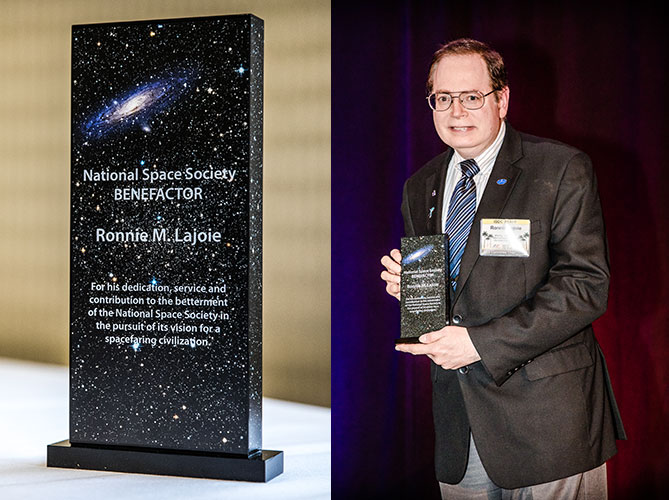 Ronnie Lajoie (HAL5 Chapter) was given the NSS Benefactor Award in recognition of his contributions to almost everything NSS does. 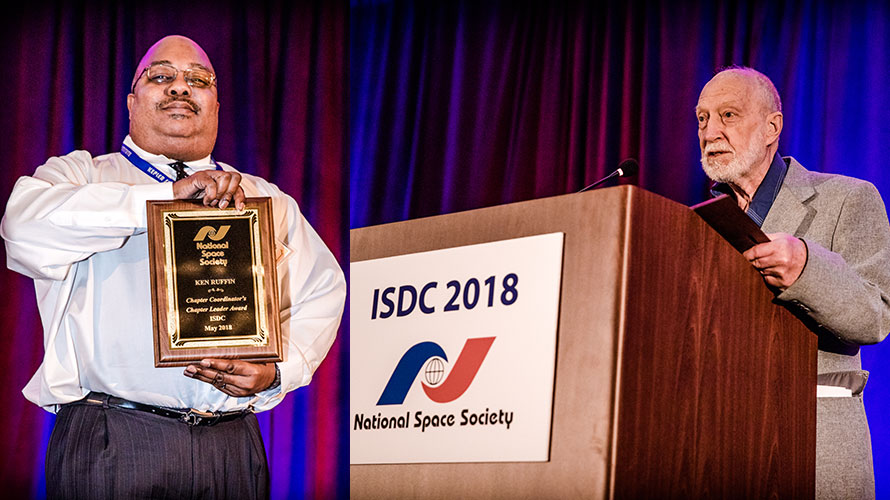 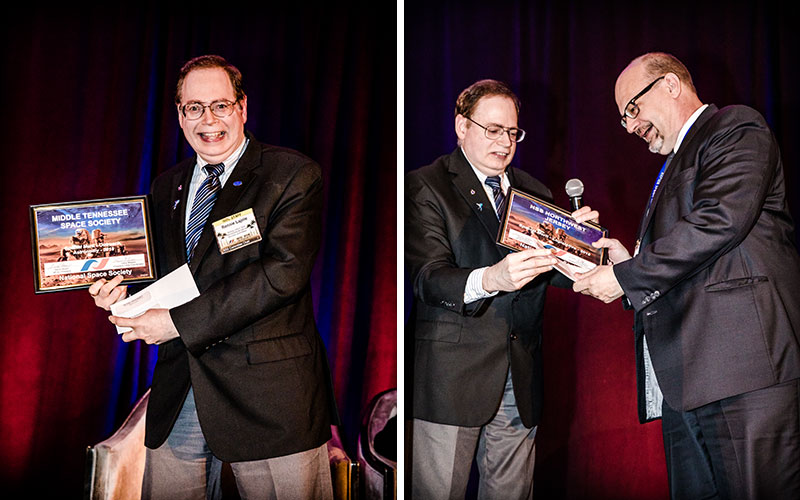 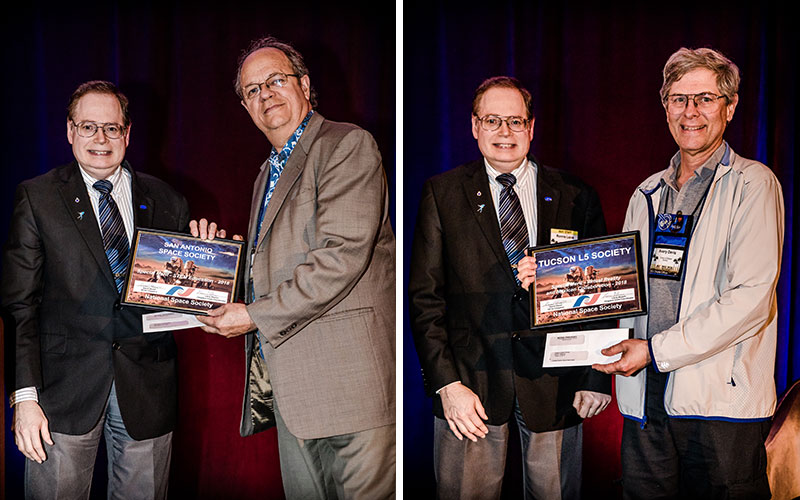 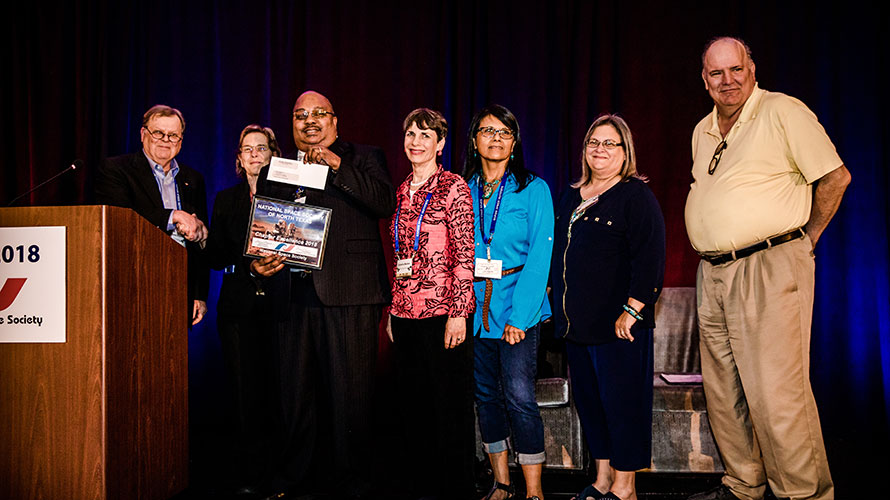 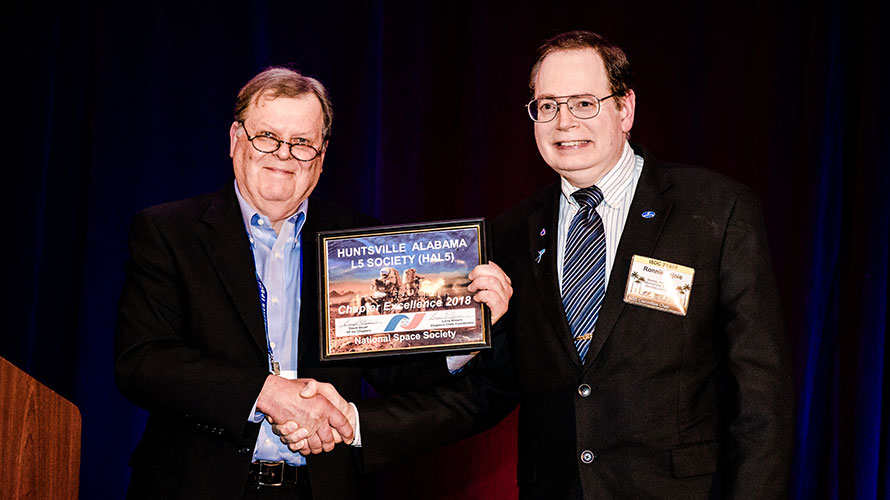 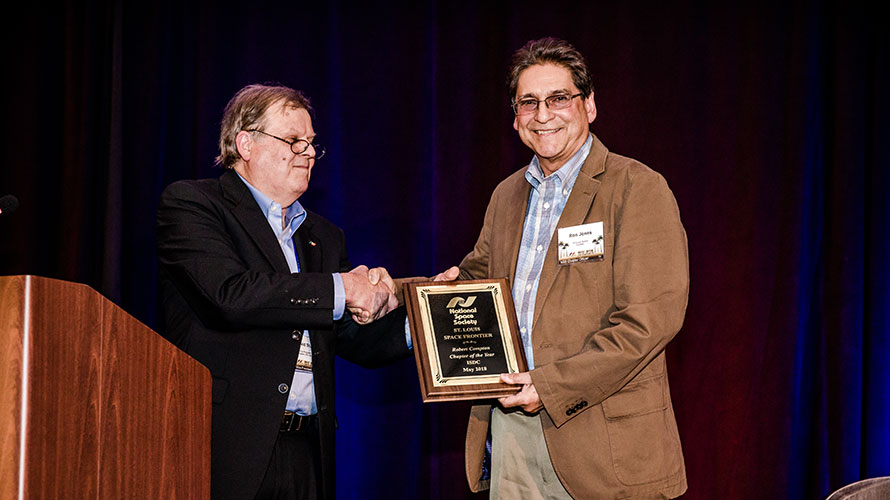 David Stuart then presented the Robert Compton Chapter of the Year Award to Ron Jones of the St. Louis Space Frontier chapter, in recognition of their efforts to successfully combine running the 2017 ISDC with their outstanding local outreach.

Obviously such chapter leaders aren’t the type to rest on their laurels for the remaining days of an ISDC. Several chapter members gave regular presentations: 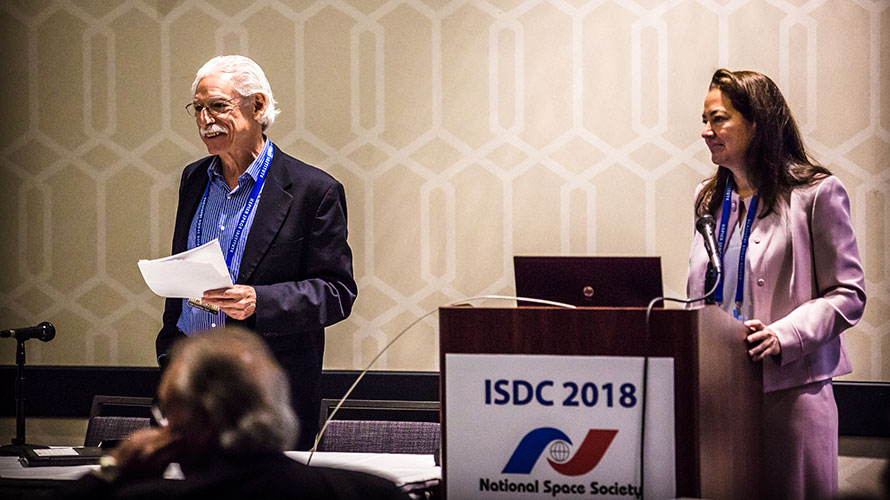 International Committee member Al Anzaldua (above, Tucson chapter) moderated Friday’s Many Roads to Space and Advanced In-Space Operations symposia, since he invited many of the speakers. He also gave a talk on “20,000 New Commercial Satellites: What, Me Worry?” (At the podium: Dr. Mindy Howard.) On the Space Solar Power track, Hal Walker, Jr. (Cape Town and OASIS) spoke of “Remembering Peter Glaser.” He was also on the “5 Years of SSP” panel. Elsewhere, Dr. Seth Potter (OASIS) talked about “Space Solar Power Orbital Options.” On Saturday he was on a panel about California’s aerospace industry development from 1886(!) aviation through 2015’s space businesses. Later he gave us “Where’s the Stuff? An Overview of Solar System Properties and Resources.” 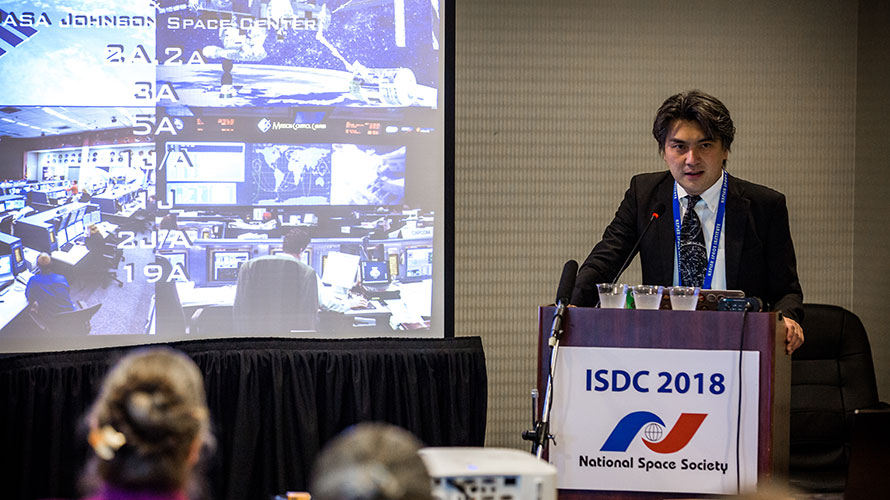 Taichi Yamazaki (NSS Japan), however, must be considered the star chapter-member contributor to ISDC 2018 programs. He brought at least two sessions of Japanese programming with him, including an overview of the over 50 space businesses composing his company, ASTRAX Space Services, including ASTRAX Zero Gravity Flight Services. He brought with him three other chapter members and a dozen or more ASTRAX-related speakers, entertainers and artists. NSS Japan Secretary Keiichi Iwasaki introduced the Space Business and Space Flight Services School, ASTRAX Academy. Yusuo Okada spoke on the ASTRAX Space Cruise Business. For those who waited past the formal end of the presentation, Tomoko Kasai (NSS Japan), Misuzu Nakamura and Hidetaka Nakahodo described ASTRAX space funeral services: ASTRAX MEMORIAL Inc. 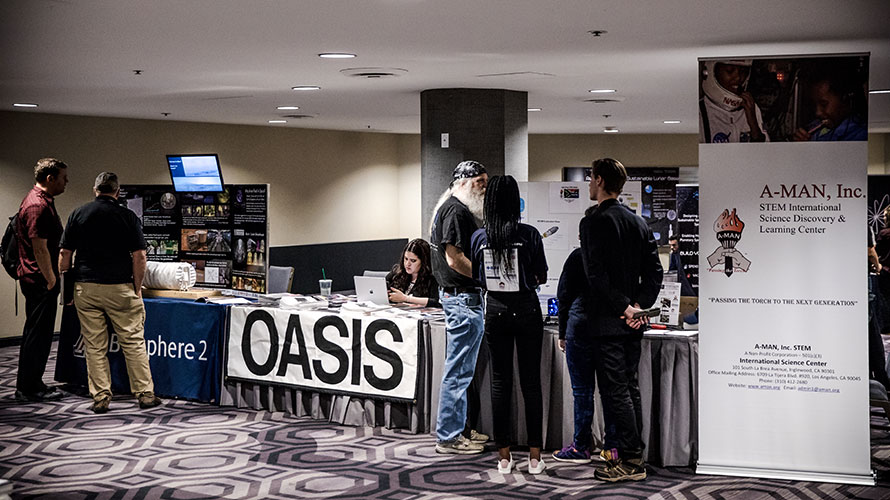 Chapter members also staffed display tables, which can be fun if you like talking with the people who stop to look. Above is the OASIS table, right next to the popular A-MAN display. A-MAN is a sponsor of the new Cape Town, South Africa chapter, which is mostly high school students. Some of them won places in the NASA Space Settlement Contest, and brought their entry to ISDC.

Actually this ISDC offered plenty to lift spirits and keep the fun in space. 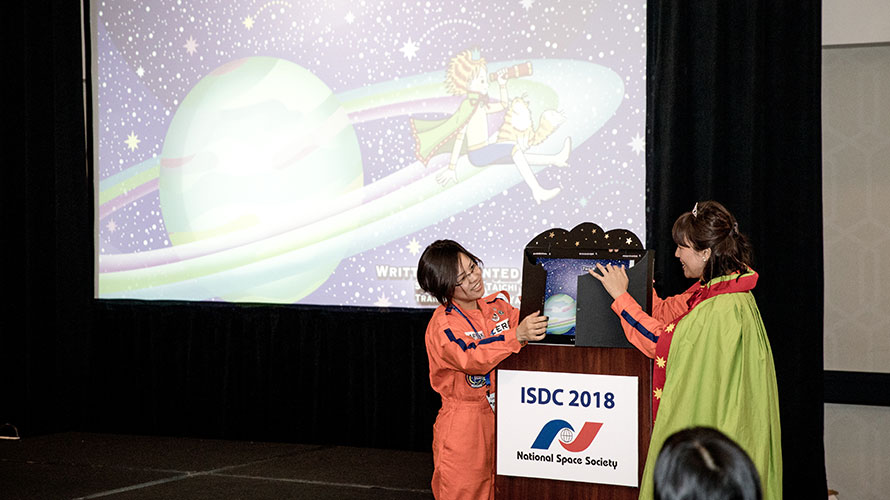 Mayuko Ishii, NSS Japan treasurer, and her daughter Mahiro (also an NSS Japan member) gave an overview of the ASTRAX STUDIO Rocket Prince Project for which Mayuko is the principal artist. “The Rocket Prince,” a space musical in traditional Japanese costumes, followed. 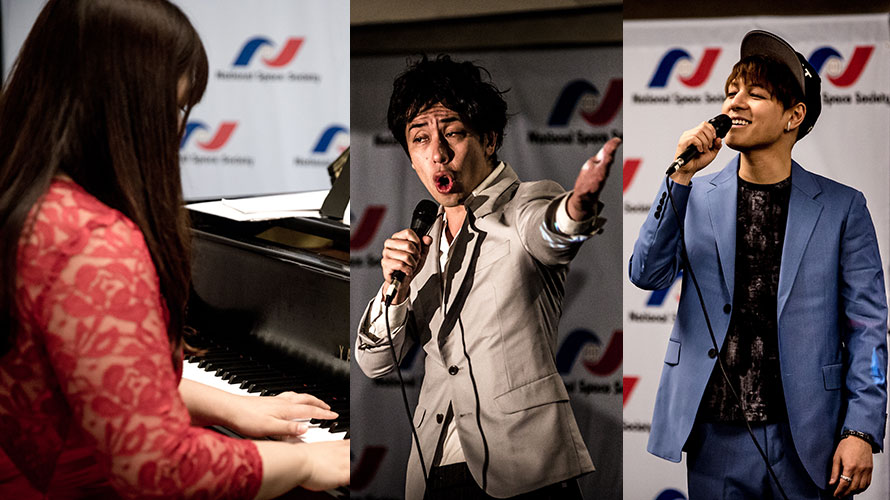 After that were some modern Japanese entertainers: pianist Misuzu Nakamura and singers Hayaki Tsuji and Hidetaka Nakahodo. 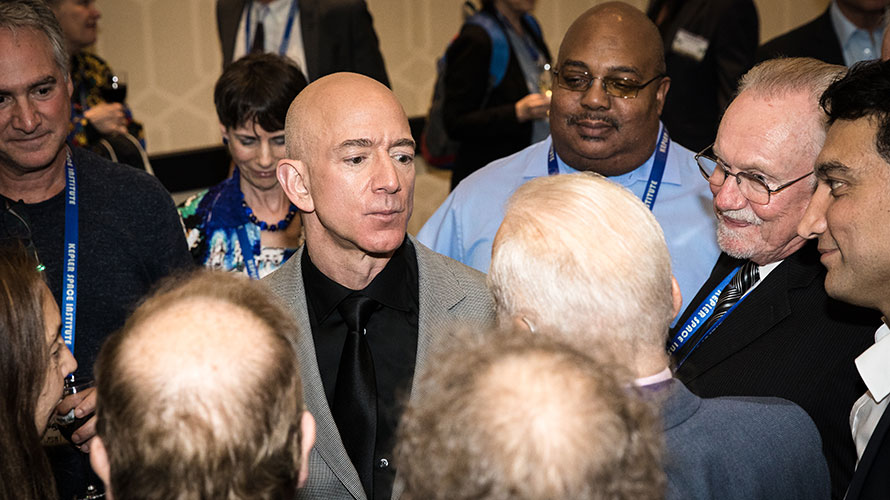 Oh yes—and the parties! Ken Ruffin and Christine Becker appreciate one of many chances to mix with Jeff Bezos and others.