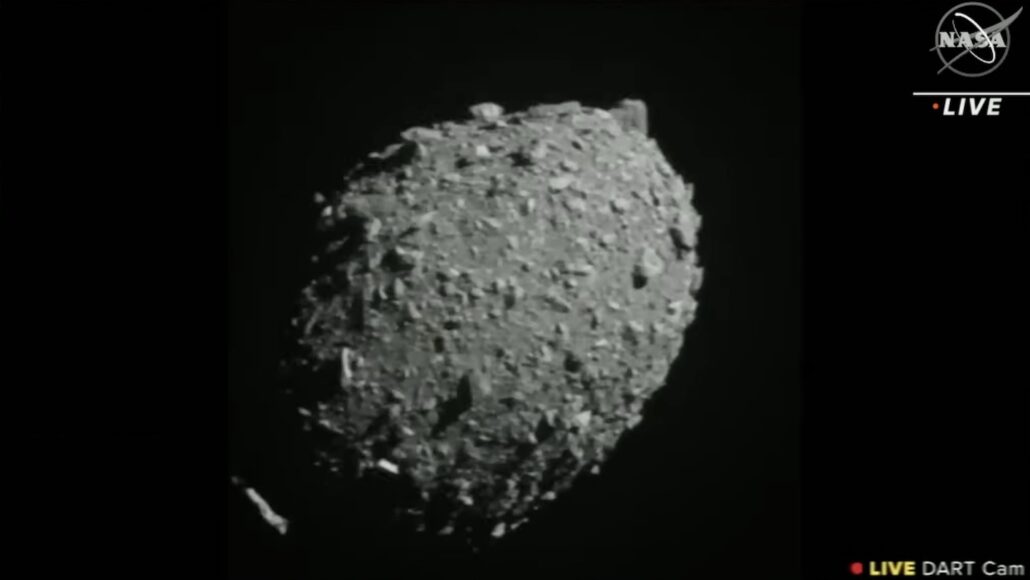 The Double Asteroid Redirection Test Has Successfully Met Its Target

Image: Photo of the asteroid moonlet Dimorphos seconds before the DART spacecraft crashed into it. Courtesy NASA.

The National Space Society lauds NASA’s Double Asteroid Redirection Mission on a successful rendezvous and impact with Dimorphos, a moonlet orbiting the asteroid Didymos. The DART mission, which is a project of the Johns Hopkins University Advanced Physics Laboratory, was the first test of any technique to divert an asteroid, and will help us better understand how to avoid a potentially catastrophic collision with Earth.

NSS CEO Anita Gale observed: “The DART mission is helping us understand how to do one of those tasks that we hope we never have to do, but we absolutely must know how to do if a killer asteroid comes our way. DART is demonstrating how a small nudge can, if we get the results we plan on, change the trajectory of an asteroid.”

The DART spacecraft is just 1200 pounds in mass and, as one NASA official put it, “it’s like ramming a golf cart into the Great Pyramid.” Nevertheless, the impact is expected to alter the trajectory and speed of Dimorphos’ orbit around Didymos sufficiently to be observable from Earth. While this change will be minimal, it will prove the kinetic impactor technique for changing an asteroid’s trajectory. While neither asteroid is currently a threat to Earth, the Didymos/Dimorphous pair was selected due to the moonlet’s small size and mass, and the ability to measure changes in its orbit around Didymos quickly.

”DART is an important step toward a complete planetary defense capability, but without the ability to find all dangerous asteroids and comets, it will not be that useful,” said Dale Skran, NSS COO. “That’s why NSS is focused on getting funding for the Near-Earth Object Surveyor infrared telescope (NEO Surveyor).”

NASA estimates that some 25,000 large asteroids inhabit the inner solar system, and many could one day pose a threat to Earth. The meteor that caused such widespread damage in Chelyabinsk in 2013 was only 60 feet in diameter; many of the larger ones are city-killers and worse. NASA and the U.S. Air Force track fewer than half of the largest bodies, and with our ground-based telescopes, it could take 30 or more years to find the rest. The proposed NEO Surveyor orbiting telescope will specialize in finding large asteroids and could cut that time by two-thirds. It is urgently important that it be fully funded—we can’t stop impacts from asteroids we can’t see. Learn more about how to support this critically important mission here.

The National Space Society has been a leader in calling for the protection of Earth from space-borne objects for decades. For more information on our efforts in planetary defense, see the NSS planetary defense page.