NSS Forum June 3: Gerard K. O’Neill and the Future that Calls Us

Gerard K. O’Neill and the Future that Calls Us
Featuring Emily Carney
Author, Spaceflight Enthusiast, and Founder of Space Hipster

REGISTER FOR THIS SPACE FORUM 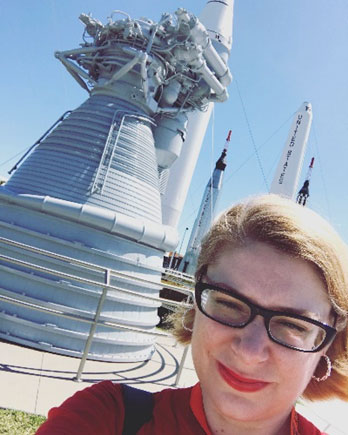 What impelled a mid-career Princeton physicist to propose that perhaps civilization could better be served in a space settlement away from the Moon, or a planetary surface? Why did this idea capture the minds of thousands from the 1970s to the present time? Don’t miss this informative space forum as Emily sets out to discuss Dr. Gerard K. O’Neill’s early career, interest in spaceflight and ultimately space settlements, and how his vision inspired one of the biggest grassroots movements in the space community. Emily will also touch on O’Neill’s career as a satellite entrepreneur and his work as a writer.

Also be sure to read Emily’s article “Gerard K. O’Neill: A Heroic Life” in the latest issue of Ad Astra magazine.

Emily Carney is a spaceflight enthusiast and author hailing from Saint Petersburg, Florida. Her first vivid space memory was seeing Columbia launch in late 1981 (STS-2). Even though she was very young (three years old) and the launch was 140 miles away from where she stood, she’ll never forget it. From then on, she was obsessed with the space shuttle, and spaceflight in general.

In 1997, Carney enlisted in the United States Navy, and at one point worked as a nuclear propulsion mechanical operator aboard the USS George Washington (CVN 73). When she was honorably discharged in 2003, she went back to college and earned a degree in education. She only taught for a brief time, but after she left the education field, her passion for spaceflight was reignited.

Carney worked as a freelance writer from 2008 to 2011, and during that time she started a spaceflight blog, This Space Available (accessible via space.nss.org/category/this-space-available). She also co-hosts a weekly podcast, Space and Things, with Dave Giles (spaceandthingspodcast.com).

In 2011, Carney wanted to start a Facebook group for space enthusiasts, but was struggling to find a good name. Her husband, Steve, suggested “Space Hipsters” as sort of a sarcastic placeholder, but the name stuck. The group grew more quickly than she could imagine, and at present time it totals over 20,500 members. Space Hipsters boasts members from all around the world, and includes space enthusiasts, writers, artists, scientists, engineers, aspiring astronauts, and even a few actual astronauts.

Register no later than June 3 at 8 pm EDT

You can find a library of previous space forums and town halls on the NSS YouTube Channel.