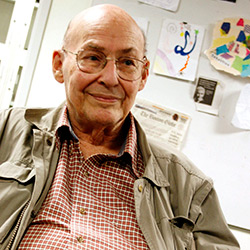 Marvin was also the thesis advisor for current NSS Governor K. Eric Drexler, a pioneer in the field of nanotechnology and an early activist who helped start NSS.

Hugh Downs, Chair of the NSS Board of Governors, said, “Marvin Minsky was a bright light in the arena of accelerating knowledge in modern physics. Where many of us plodded along to keep up with these changes, he seemed to always manage to be even with them. He will be sorely missed by those who worked with him and knew him well.”

Marvin Minsky was Toshiba Professor of Media Arts and Sciences, and Professor of Electrical Engineering and Computer Science, at the Massachusetts Institute of Technology. His research led to both theoretical and practical advances in artificial intelligence, cognitive psychology, neural networks, the theory of Turing Machines and recursive functions. He made other contributions in the domains of graphics, symbolic mathematical computation, knowledge representation, computational semantics, machine perception, and both symbolic and connectionist learning. He was also involved with advanced technologies for exploring space.

In October 2015, the MIT Media Lab presented Marvin with a gift in honor of his lifetime commitment to MIT students. “What a beautiful thing. What does it do?” he asked, when studying the world’s first 3D-printed clear glass object. View the presentation here: www.youtube.com/watch?v=2tIIe3NnodU.

The report from the Citizens Advisory Council, in which Marvin participated, was titled Space: The Crucial Frontier and includes this preamble:

“Space is potentially our most valuable national resource. A properly developed space program can go far toward restoring national pride while developing significant and possibly decisive military and economic advantages. In exploring space we will rediscover frontiers and more than frontiers; we can rediscover progress. The exploitation of space will have far reaching historical significance. The statesmen who lead mankind permanently to space will be remembered when Isabella the Great and Columbus are long forgotten.” (space.nss.org/l5-news-space-the-crucial-frontier-citizens-advisory-council-on-national-space-policy/)

Today, NSS is vigorously promoting our expansion into space.  We are engaging with the international community via collaborations, tracks at our annual International Space Development Conference, and articles in Ad Astra and in major international publications. NSS volunteers today maintain the Space Settlement Nexus (space.nss.org/space-settlement-national-space-society/) in carrying forward Marvin Minsky’s vision.