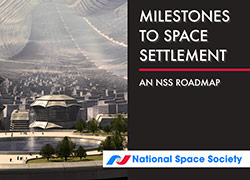 Development of the NSS Roadmap

In September 1999 a group of highly committed Directors, Chapter leaders and activists came together at an NSS Policy Summit to collectively, and intensively, debate what they determined to be the key attributes of a spacefaring civilization; what developments needed to occur to achieve it; and what barriers needed to come down to make our vision, reality.

The output of that Policy Summit is the Road Map that NSS will now use to guide our activities. It not only establishes the pathway forward, but also identifies milestones that we know must be passed, if we are to be making progress towards our goals. Not only does it help prioritize the key areas requiring change, but also it gives us a timeframe for how long we have to change these things, before they become anchors holding us back from the future.

With the Road Map in hand we can begin focusing our efforts on addressing the most urgent and most important barriers. At all levels of the Society’s efforts, from individual activists, through chapter activities, right on up to the national and international activities of NSS, we can channel our efforts for maximum effect.

One of NSS’ greatest strengths is often also one of its greatest weaknesses. We have a tremendously diverse array of backgrounds and skills amongst our membership, yet all too often members feel that they need to be part of the space industry to be able to contribute to our cause. That couldn’t be further from the truth, and in fact the Road Map helps highlight the fact that we have technical, legal, economic, regulatory, psychological, cultural, and physiological barriers to overcome. In effect we NEED people from all walks of life to be able to influence the diverse array of barriers before us.

Aside from guiding NSS in where to focus its efforts, the Road Map also serves to help every activist understand how their efforts help to make a difference. Whatever activity the Society or its members undertake should have some relationship to attacking the barriers we have identified. If it is an NSS seminar to educate investors about reusable launch vehicle technology, it is helping to bring about the cheap access to space that we require. If it is Australian members writing to their Government Ministers to have Australia push for the abolition of the Moon Treaty, it clearly supports our belief in the need for protection of private property rights in space. Every thing that we do should be able to be linked to removing those barriers along the pathway to our vision. If they can’t be linked to the Road Map, then chances are that those efforts are not addressing our highest priorities, and therefore should no longer absorb our resources.

While the Road Map is our guide for now, like all road maps, it will need to change with the evolving scene. Just as Strategic Planning needs to be constantly revisited to stay in tune with current needs, our Road Map must be re-evaluated periodically to make sure we are pursuing the issues of greatest relevance to NSS’ vision, and those most in need of our assistance.

Those who were directly involved in the Policy Summit that produced the Road Map felt that it was one of the most meaningful activities that they had been involved with for many years. We owe a debt of gratitude to those ‘Summiteers’ who spent so much of their own time to achieve this result. We can all now repay that debt by focusing our efforts on bringing down the barriers that they have identified. The road may be long, but at least someone has marked the pathway for us.

Overview of the NSS Roadmap

The NSS Roadmap to Space Settlement depicts the path currently viewed as leading to realization of our vision. It displays an evolutionary path consisting of major program and policy initiatives, with certain alternatives, and identification of the major barriers to proceeding on the path. The rate of progress is dictated by removal of the barriers, by resources available to the international space development community, by commercial space development, by technical progress, and by political will. NSS recognizes the significance of the barriers to progress on our roadmap, and is dedicated to removing them in the interests of humanity’s long-term future.

Each of the milestones and barriers is discussed elsewhere. Here we describe the roadmap as a whole.

The overall concept of the roadmap is to begin or continue activities that can be started now or are ongoing, to give priority to overcoming the barriers which deter near-term progress, and then to move towards long-term goals in an orderly manner.

Most of the near-term activities are related to technology development, legislation, and knowledge acquisition (the developing space tourism industry, for example, is deeply involved in all three). Two related space mission activities stand out: (1) acquisition of knowledge specific to human spaceflight to learn how to deal with possible biological risks, and (2) acquisition of knowledge specific to settlement by using robotic missions to determine the best targets for human missions beyond Earth orbit. These objectives could in part be built into currently planned missions.

Space tourism is an important step in the direction of making space travel accessible to ordinary people, and NSS advocates removing policy barriers, as well as establishing a pro-active legislation and policy basis, which encourages rather than discourages commercial development of space tourism.

Certain studies are important: particularly to define space transportation and mission architectures appropriate to settlement, and to define how early missions can best achieve technology advancements and demonstrations of settlement self-sufficiency. Space transportation and mission architectures specifically aimed at settlement will be different that those intended mainly for scientific exploration. The most important differences are (1) settlement architectures must drive recurring costs to the lowest practical levels, and (2) self-sufficiency needed for settlement goes far beyond the usual assumption of propellant production, and must be demonstrated to be stable and adequately productive over long periods of time.

Economic feasibility of settlement demands low-cost space transportation (by present standards; a settler who had to pay the ticket price would not think it “low” even if as low as theoretically achievable!). Launch costs need to come down a long way. Commercial launch costs are coming down due to competition in the marketplace, and growth of the commercial market for launches of communications satellites. A rigorous policy that NASA should purchase launch services for human exploration missions to the extent possible (rather than develop a “custom” heavy-lift vehicle) would increase the market for launches in the heavy-lift class (served initially by Atlas V, Delta IV, and future versions of Ariane V), stimulate development of improved heavy-lifters, and help to drive prices down. In fact, government agreement to purchase launches is likely to be essential to the development of such heavy-lift vehicles. Until a suitable commercial vehicle becomes available for carrying people, the NASA shuttle would necessarily continue to fill that role, but NASA should announce a policy to purchase human trips commercially when a suitable launch service becomes available.

The sought for in-space transportation system will surely be fully reusable and employ advanced technology. There are several alternatives, and it is important to select one or more for development early, so that long-range plans can be laid and technology advancement begun. Further, until studies and technology demonstration show that costs commensurate with settlement are reachable, we cannot affirm a policy goal of settlement as other than an ideal.

Let us re-emphasize: While a government-supported scientific base could exist for a very long time on public funds if the prices were right, true settlements require self-sufficiency. We cannot expect governments to accept a perpetual claim on public funds for a space settlement program. This means that settlements, in the long run, must achieve survival and growth almost entirely on indigenous resources, relying on imports only to the extent these are paid for by settlement exports. The underlying technology and operations must be demonstrated as fully capable before human populations beyond Earth are permitted to grow to the point that there is no reasonable way to turn back.

Settlement begins with human missions beyond Earth orbit. While settlement must await great cost reductions in space transportation, the initial missions need not necessarily do so. However, even initial missions need cost reduction, and increased availability of the transport resource, to be able to fit into an overall space program serving recognized needs. Timing of ambitious missions such as these is driven by budget, including competing demands for resources, and political considerations. Since these cannot be forecast accurately, our roadmap does not have a specific timetable.

The capacity of the Moon and Mars to support people is limited. Presently, these capacities are unknown. People have speculated that one billion or so settlers could probably live on Mars without overstressing resources there, assuming enough water is present. The number that could live on the Moon is a good deal less. One of the reasons O’Neill so strongly favored the idea of constructed habitats was that available resources in the solar system, i.e. in the asteroid belts, could permit construction of enough habitats to support many times Earth’s present population.

The eventual goal of space exploration and development is to leave the solar system and travel to the stars. This is by far the most challenging goal on the road map. We cannot today put any sort of schedule to it. For the purposes of the present plan it is sufficient to recognize it as the ultimate goal.

Those elements of the road map that are first steps can begin now or as soon as certain barriers are removed. However, human missions beyond Earth orbit cannot go everywhere at once. Choices must be made where to go first, why, and when. It is tempting to adopt an unwavering position on the subject. However, NSS has avoided doing so.

We recognize that motivations are different for the Moon, Mars, or asteroids. Planetary science and the search for existing or former extraterrestrial life clearly favor Mars. Industrial development and use as an astrophysics platform clearly favor the Moon. Mining for mineral and other resources, and the lack of gravity which reduces fuel costs, may make near-Earth asteroids a better target. Settlement is a legitimate objective for any of these targets, and if successful, greatly reduces the cost for mission accomplishment at other locations. Proper choice of the in-space transportation infrastructure can make all targets accessible.

Determining which motivation takes precedence is a political decision. Our expectation is that a return to the Moon is a prudent first step on the road to Mars. A commitment to go directly to a Mars mission, with a stay on Mars’ surface of a year or more is most likely to be viewed as placing people and their “can’t test them too much” machines on a very unforgiving mission profile. A return must await opening of a low-energy window and then requires many months. By comparison, a return from the Moon can occur almost any time and requires only a few days. Testing other than in the relevant environment and under actual operational conditions is incomplete. An unexpected failure (which might not even be a hardware failure, but an overlooked operational necessity or a human failure) that would likely be fatal on Mars might be recoverable on the Moon.

The final decision, however, is not for NSS to make. It must be made by the scientists, engineers, mission planners, and sponsors of the missions.