Through the Glass Ceiling to the Stars: A Conversation with Col. Eileen Collins, USAF (retired)

Eileen Collins made history in July 1999 when she became the first woman to command an American space mission, launching on Columbia for the STS-93 mission. That was one of many crowning achievements that confirmed Collins as an aviation and space pioneer. She was in the first class of women to earn pilot’s wings at Vance Air Force Base and was their first female instructor pilot. She was only the second woman admitted to the Air Force’s elite Test Pilot Program at Edwards Air Force Base.

And NASA had such confidence in her skills as a leader and pilot that she was entrusted to command the first shuttle mission, STS-114, after the Columbia disaster, returning the U.S. to spaceflight after a two-year hiatus in July 2005. Since retiring from the Air Force and NASA in 2006, she has served on numerous corporate boards and is an inspirational speaker about space exploration and leadership.

In her new book, Through the Glass Ceiling to the Stars (released 19 Oct 2021), Collins shares her amazing story; the challenges, the achievements, and her inspiring thoughts for the future of space and the next generation. Don’t miss this personal conversation with Collins as she highlights many aspects of her pioneering career and discusses what is next in space. She will be joined by Jonathan Ward, her coauthor who has written several other acclaimed books on space history. The session will be moderated by Dave Dressler after an introduction by NSS President Michelle Hanlon.

Everyone who registers and attends the session will be placed into a drawing for a copy of Collins’ “Through the Glass Ceiling to the Stars.” (4 available) 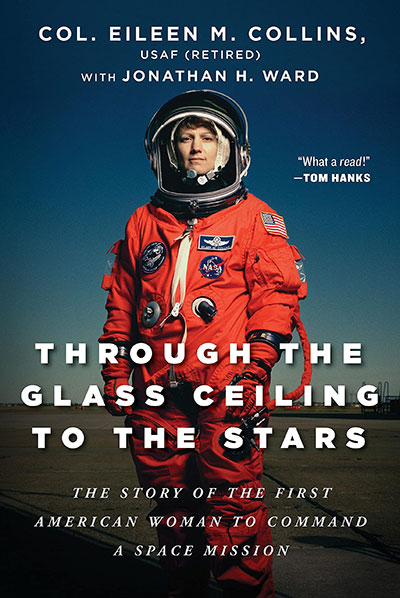 Eileen M. Collins is a former astronaut and a retired USAF colonel. She has logged more than 6,751 hours in 30 different types of aircraft and has more than 872 hours in space. Collins entered the Air Force as an ROTC Distinguished Graduate after earning her B.S. degree from Syracuse University in 1978. Collins graduated from Air Force Undergraduate Pilot Training in 1979 and from the USAF Test Pilot School in 1990.

Selected as an astronaut in 1990, she flew on four shuttle flights. She served as a pilot in 1995 aboard Discovery and for Atlantis in 1997. Collins became the first woman commander of a U.S. spacecraft on Columbia in 1999 and her final flight was as commander of Discovery in 2005, the “Return to Flight Mission” after the tragic loss of Columbia.

Collins was inducted into the Astronaut Hall of Fame in 2013. She currently serves on several boards and advisory panels, is a professional speaker and an aerospace consultant. She is married with two children and lives in San Antonio, TX.

Jonathan H. Ward is an author, a Fellow of the Royal Astronomical Society, Solar System Ambassador for the Jet Propulsion Laboratory, a Resident Astronomer for Viking Ocean Cruises, and a speaker on space exploration topics.

Ward enjoys telling stories of unsung heroes—everyday people who find themselves at historical crossroads or in extraordinary circumstances and who rise above adversity to achieve success against seemingly impossible odds.

Ward coauthored Eileen Collins’ long-awaited memoir, Through the Glass Ceiling to the Stars: The Story of the First American Woman to Command a Space Mission. The book, published by Arcade Press, hit the shelves on October 19, 2021.

His 2018 book, Bringing Columbia Home: The Untold Story of a Lost Space Shuttle and Her Crew, coauthored with former space shuttle launch director Michael Leinbach, earned many accolades and was recently optioned for development into a feature film. Ward lives in Greensboro, North Carolina with his wife Jane.

Dave Dressler’s area of professional focus is space exploration and development. He works for the National Space Society as the Director of Information Systems. Dressler is also the Conferences Committee Chair for the society’s annual International Space Development Conference (ISDC). Beyond his work, travel is his passion. He is an avid SCUBA diver, loves biking and hiking national parks, and would love to one day scale mountains on the Moon.

Dressler was previously the Technology Manager for San Diego County Office of Education, and a Network Analyst for Capistrano Unified School District. Dressler has an MBA from CSU San Marcos and lives in San Diego, California.

Everyone who registers and attends the session will be placed into a drawing for a copy of Collins’ “Through the Glass Ceiling to the Stars.” (4 available)

Register for the Space Forum  to reserve your seat and ask your questions.

Register no later than October 21 at 8 pm EDT.