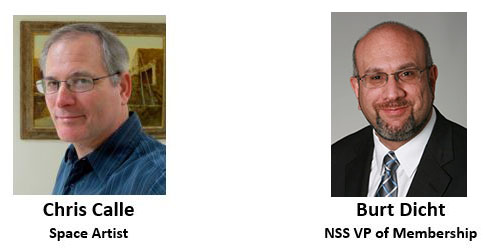 Register today to reserve your seat and to submit your questions. Use the link below.

Register no later than February 11 at 8 pm EST

Note: If you have difficulty registering, send an email to [email protected]

Description: In 1962, Chris’ father Paul Calle was chosen as one of the first eight artists of the newly established NASA Fine Art Program. Created by then NASA Administrator James Webb, who, sensing the increasing public interest in space exploration sought to use art as a way to emotionally capture NASA’s progress in its quest for the Moon. Beginning in May of 1963, with the final Mercury flight, Paul Calle and the other artists documented the wonders of spaceflight through the Gemini,  Apollo and Space Shuttle programs. Captured through the artists’ eyes, the artwork they created shaped the stories of the human spaceflight program and did much to inspire the nation as NASA progressed to Armstrong’s “one small step.” With a focus on his father’s work and of the other artists, Chris will trace this visual history by highlighting this impressive work. Chris will conclude with his own story as a NASA space artist and the role space artists play today in documenting the history of space exploration.

Chris Calle is an artist who has designed more than 30 postage stamps for the United States and hundreds more for countries as diverse as Sweden and the Marshall Islands as well as designs for the United Nations. Chris’s US postage stamp design work includes the two stamps in 1994 celebrating the 25th Anniversary of the Moon Landing jointly designed with his father Paul Calle who had designed the iconic First Man on the Moon stamp in 1969. Perhaps Chris’ most well-known artwork is the $2.40 Priority Mail stamp design of 1989, which depicts Apollo 11 astronauts Neil Armstrong and Buzz Aldrin planting the American flag on the Moon.

During his 20+ years as an illustrator and today, much of his artwork is related to the theme of space exploration. As an official NASA Artist, Calle covered two of the early Space Shuttle missions, producing artwork that is now in the collections of the National Air and Space Museum and NASA. In 1962, his father Paul Calle was one of the original 8 artists chosen to document the final mission of the Project Mercury program. Chris is the author of Celebrating Apollo 11, The Artwork of Paul Calle which details Calle’s involvement in the NASA Fine Art Program and focuses on the on-the-spot artwork Paul created as the only artist present during the suiting up of the Apollo 11 crew on the morning of their historic launch to the Moon. Chris can be found online at www.callespaceart.com.

Burt Dicht currently is the Director of Student and Academic Education Programs for IEEE where he oversees IEEE’s pre-university STEM education and university engineering education programs. Mr. Dicht began his career in the aerospace industry in 1982 and held the position as a lead engineer for Northrop Grumman and Rockwell Space Transportation Systems Division.  Specializing in systems and configuration integration, he worked on programs such as the F-20A Tigershark, the YF-23A Advanced Tactical Fighter and the Space Shuttle.  Mr. Dicht also completed NASA’s Summer Employment Training Program at the Kennedy Space Center in 1980.

Mr. Dicht is a member of IEEE, ASEE, AIAA and is an ASME Fellow.  Mr. Dicht received his B.S. in Mechanical Engineering from Temple University and an M.A. in History from California State University, Northridge. Mr. Dicht has authored numerous articles on aerospace history and is a frequent guest speaker on space topics.  Mr. Dicht volunteers as an Exhibit Explainer for the Intrepid Museum in NYC, serves as a Capt. and Aerospace Education Officer for Civil Air Patrol and is Vice President of Membership for the National Space Society.