The White House announced today the nomination of Dr. Greg Autry as the next Chief Financial Officer of NASA. As NASA CFO, Dr. Autry will oversee the planning, analysis, justification, control, and reporting of all NASA’s fiscal resources. Dr. Autry was the Vice President of Space Development for the National Space Society, a position he has vacated to take the new assignment.

Dr. Autry was most recently an assistant professor of clinical entrepreneurship at the University of Southern California in Los Angeles and has taught at the International Space University as well as the Florida Institute of Technology.

“The National Space Society congratulates Greg for his new assignment with NASA,” said Bruce Pittman, the Senior Operating Officer for NSS. “I’m confident that he will provide NASA with the same brilliance he has shown while at NSS. We will miss his insights and guidance but are pleased to see him move into this increasingly important position.”

Among his many accomplishments, Dr. Autry previously served on the NASA Agency Review Team and as the White House Liaison at NASA. He was the Chair of the Safety Working Group on the Commercial Space Transportation Advisory Board with the FAA’s Office of Commercial Space Transportation through mid-2020 and has published extensively on space policy and the business of space development.

“A number of leaders in the space industry have spent time with NSS,” said Rod Pyle, the Editor-in-Chief of the society’s magazine, Ad Astra. “Lori Garver, NASA’s Deputy Administrator during the Obama administration, was the executive director for NSS back in the 1980s. Scott Pace, who is currently the Executive Secretary of the National Space Council, served a long term on the NSS Board of Governors. Finally, George Whitesides, who until recently was the president of Virgin Galactic, was also an executive director for NSS. Greg follows in a proud tradition, and I’m grateful to have had the opportunity to work with him on a variety of noteworthy projects.”

Upon confirmation by the Senate, Dr. Autry will replace acting NASA CFO Melanie Saunders, who stepped in when Jeff De Wit resigned the position in February. A replacement for the NSS’s VP of Space Development will be announced in the near future. 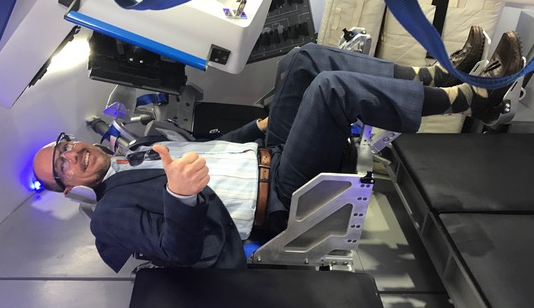