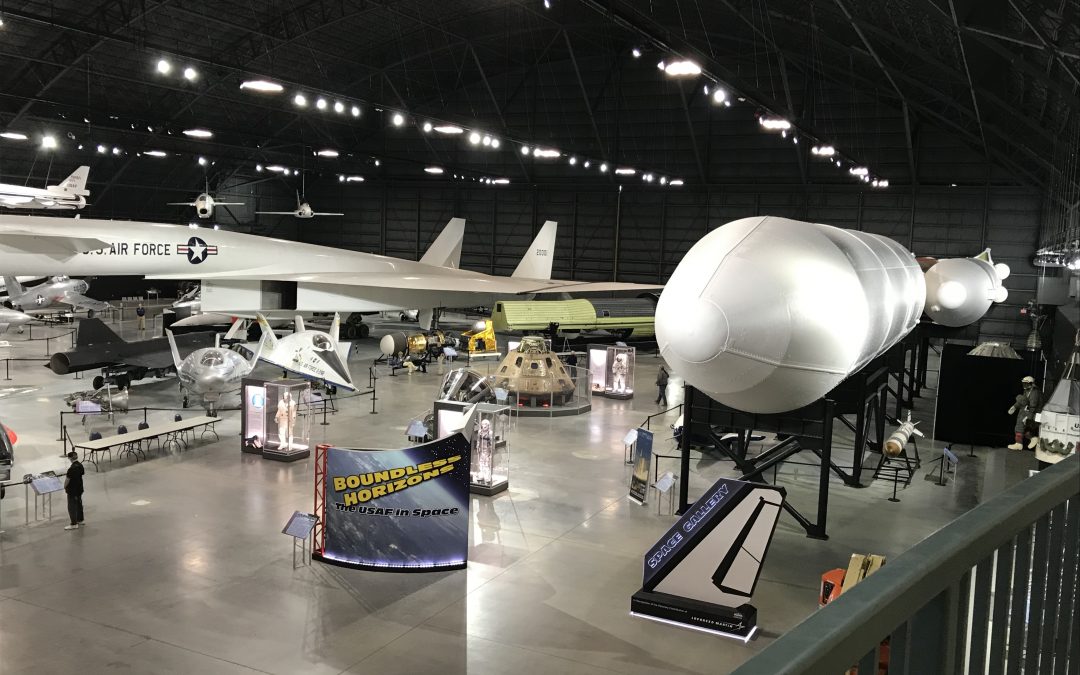 When most people think of spaceflight within the United States in terms of geography, minds tend to wander towards Houston, Texas (because astronauts are there), and Kennedy Space Center in Florida (because astronauts and crewed space vehicles launch from there). To a lesser extent, people associate the West Coast with Caltech and the Jet Propulsion Laboratory. The first state foremost in people’s minds usually isn’t Ohio, unless that ubiquitous, played-out “Many astronauts were born in Ohio! What is it about your state that makes people want to leave the Earth?” meme resurfaces on occasion. Most associate Ohio not with exciting rocketry and feats of exploration, but with the modest, middle-American farms that dot its pastoral landscape.

However, several historic sites – especially relevant during this 50th Moon landing anniversary year – reveal Ohio’s rich aerospace heritage, and deserve an extended visit (or revisit) from space enthusiasts and general audiences alike. This week, I was able to visit many sites within the National Aviation Heritage Area, described by the National Aviation Heritage Alliance (NAHA) as “a region of national historic importance encompassing Montgomery, Greene, Miami, Clark, Warren, Champaign, Shelby, and Auglaize counties in Ohio.” Here are some that will electrify even the most casual space fan.

Just a heads up – you will need several days to comb through this entire museum, which boasts more than 360 aerospace vehicles and missiles. Located at Wright-Patterson Air Force Base, the NMUSAF is the world’s oldest and largest military aviation museum. If you want to see Cold War-era reconnaissance satellites, they are here. If you want to see Apollo 15’s Command Module Endeavour, it is here. If you want to see a mighty, restored Titan IVB, it is here in its (gigantic) glory. North American X-15? They’ve got it. North American XB-70 Valkyrie? They have that, too. Its four hangars, divided by aviation eras, bring a wealth of thrills to those obsessed with air and space artifacts. One of its most famous restorations, the B-17F “Flying Fortress” Memphis Belle, is now on display in the museum’s World War II gallery. If you are in the Dayton, Ohio area, I highly encourage you to carve out a few hours in your schedule to at least view the fourth hangar. You will be kicking yourself if you miss it. 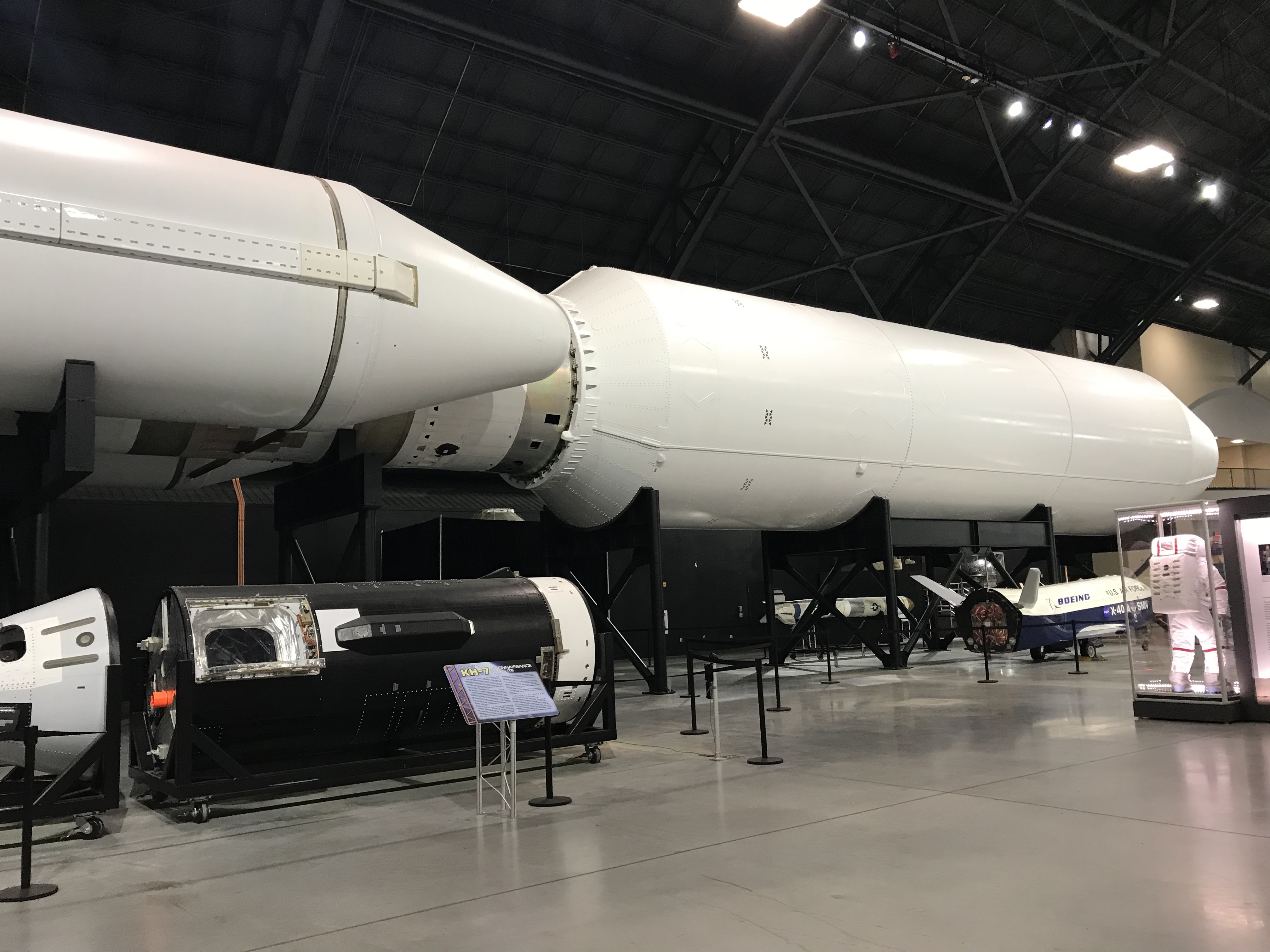 This restored Titan IVB is just one of the many spaceflight treasures displayed at the National Museum of the U.S. Air Force, located in Dayton, Ohio. Photo Credit: Emily Carney

Two of NASA’s most famous astronauts, John Glenn and Neil Armstrong, had deep roots within the Buckeye State. This museum, located in Armstrong’s hometown of Wapakoneta, Ohio, has many of the First Man’s personal effects on display, including his Gemini 8 spacesuit; in addition, one can also view the Gemini 8 spacecraft, whose mission was famously cut short in March 1966 by a thruster malfunction. According to NAHA, the museum is “getting its first major expansion – a learning center for a new STEM education program and infrastructure improvements. The ribbon cutting will coincide with an expanded Summer Moon Festival in July.” July 20th, of course, marks 50 years since Wapakoneta’s most famous homegrown aviation talent took his “giant leap.” Don’t forget to check out the F5D-1 Skylancer in front of the museum; this restored aircraft was flown by Armstrong to test X-20 Dynasoar abort maneuvers, and has earned its place in the aerospace canon (even though it’s associated with a canceled program).

The NAHA website lists several Apollo 11 anniversary events happening this summer for those in the area, or for those who would like to swing by the area. 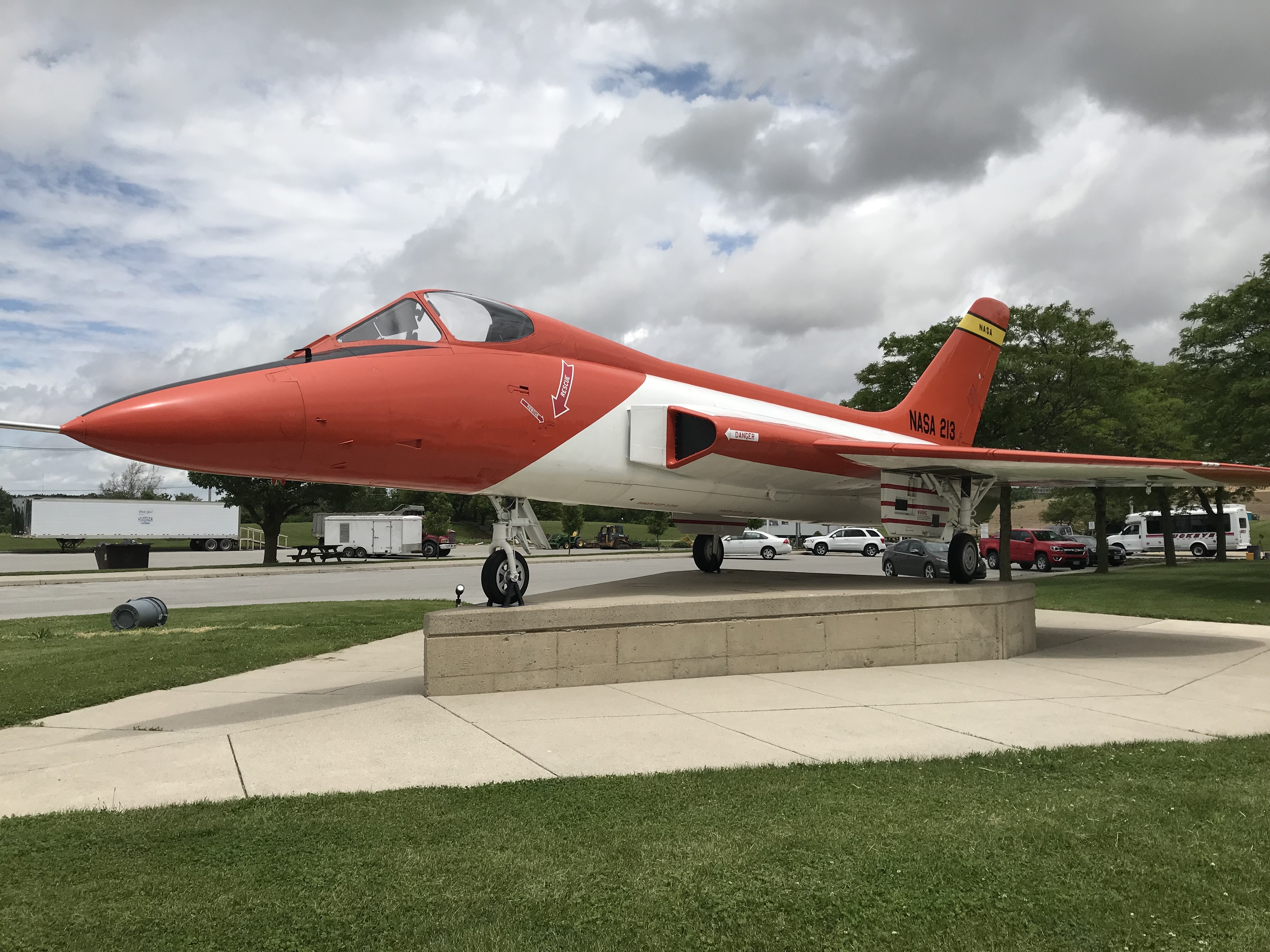 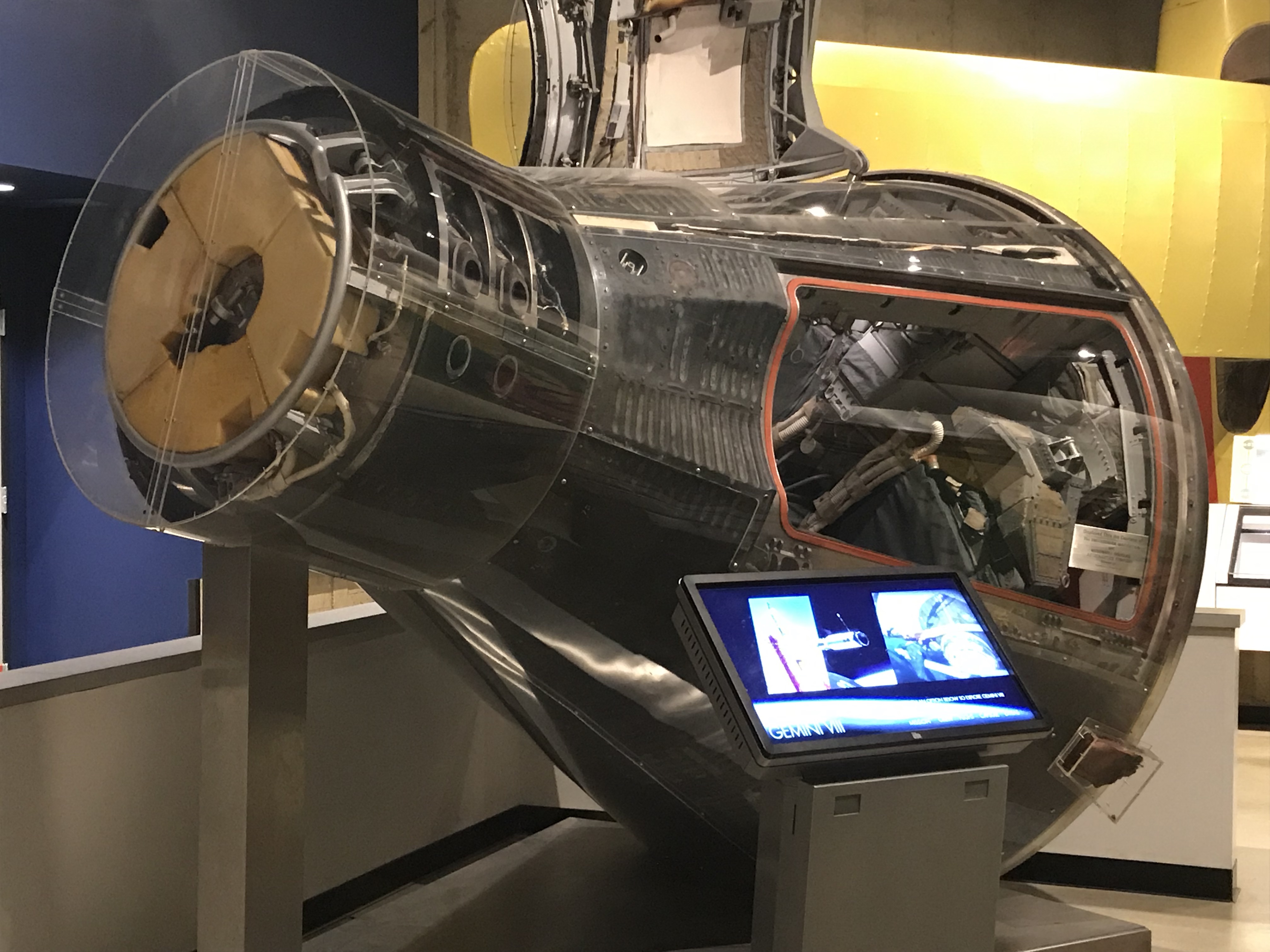 While the following sites are related to aviation, they may be of interest to spaceflight fans:

Dayton, Ohio is also home to the Wright Cycle Shop, the Wright-Dunbar Interpretive Center, and the Aviation Trail Inc. Parachute Museum. Spaceflight fans will definitely be interested in how the “free fall” parachute originated locally, and how innovations in parachute design influenced robotic and human spaceflight throughout the last 50-plus years.

This museum not only showcases some of the Wright family’s personal effects, but also displays the 1905 Wright Flyer III, the first “practical” plane capable of sustained flight.

Hawthorn Hill was the longtime residence of Orville, Katharine, and father Bishop Milton Wright; it does offer small-group tours on specific dates. If you can schedule a tour, do it; it’s fun to see how Orville Wright, while making history as an aviation pioneer, was a just a “real person” with a self-designed comfy chair, and a much-loved Saint Bernard dog, Scipio.

Located in Troy, Ohio, this museum showcases vintage WACO aircraft, and offers WACO biplane rides, fly-ins, and STEM-related programs for students. For those interested in World War II-era aviation, this is not a site to be missed.

Grimes Flying Lab is known industry-wide for innovating aircraft lighting, and the Champaign Aviation Museum, while currently restoring the B-17 Flying Fortress “Champaign Lady,” allows for rides on its B-25 Mitchell bomber, the “Champaign Gal.” Taking a ride on the B-25 war bird was, hands down, one of the coolest experiences of my life. Check out the museum’s website to reserve flights. 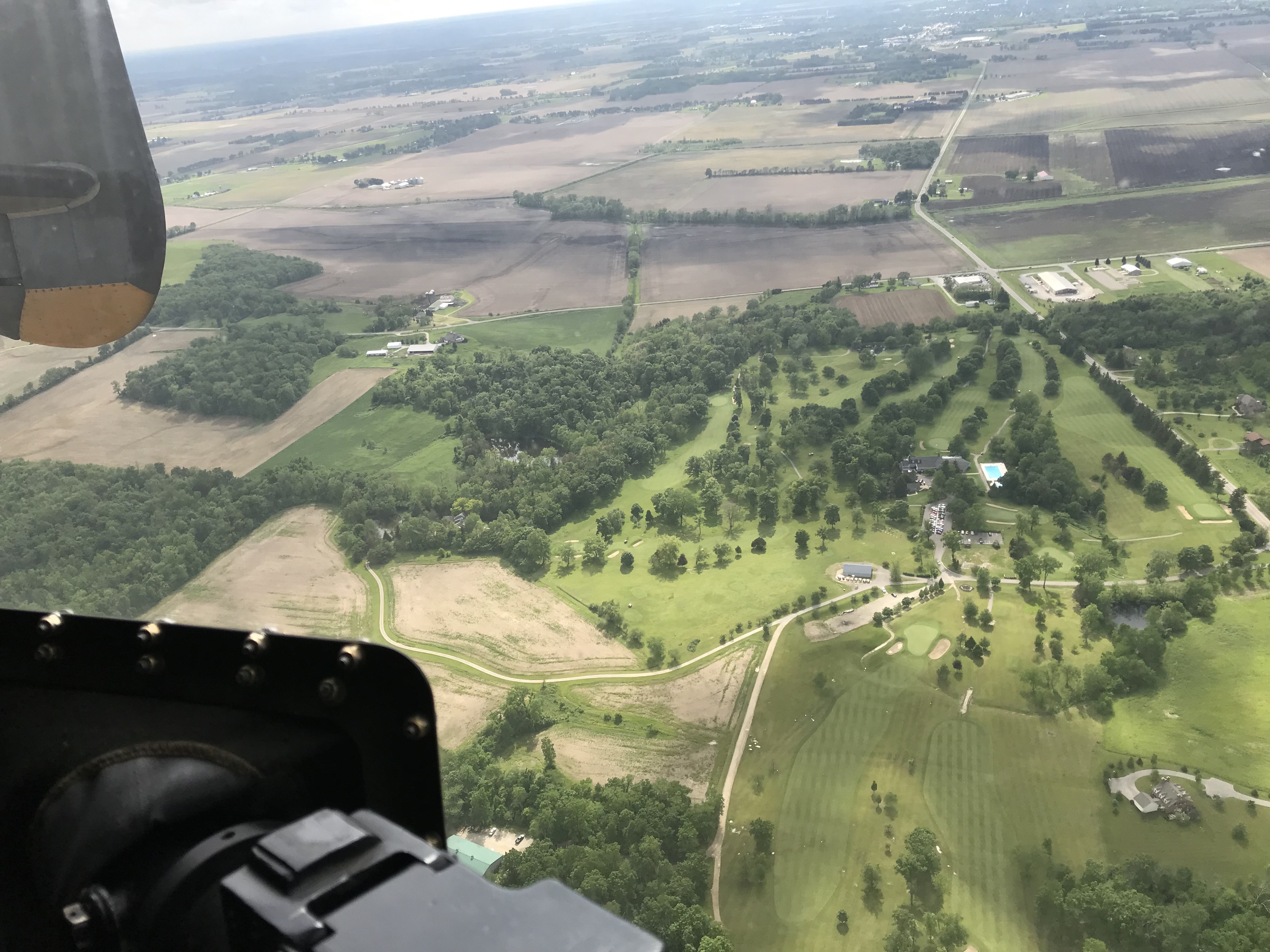 A view of Ohio from the B-25 Mitchell bomber, “Champaign Gal.” Photo credit: Emily Carney

The National Aviation Hall of Fame, founded in 1962 and chartered by Congress in 1964, honors and carries on the legacies of aerospace heroes and legends. While the NAHF is headquartered in Dayton, this year’s Enshrinement ceremony will take place on Saturday, September 28th at Wings Over the Rockies Air & Space Museum in Denver, Colorado; this year’s enshrinees include Shuttle astronaut Colonel Guion “Guy” S. Bluford, Apollo 16’s Brigadier General Charles M. Duke, Jr., Martha and John King, and the late Colonel Gregory “Pappy” Boyington.

NASA sites not covered by the National Aviation Heritage Area, but located within Ohio:

The author would like to heartily thank the National Aviation Heritage Alliance (NAHA), a nonprofit recognized by Congress as managing the National Aviation Heritage Area. Its vision statement is “to make the Dayton region the recognized global center of aviation heritage and premier destination for aviation heritage tourism, sustaining the legacy of the Wright Brothers.”