August 5, 2011, was a highly significant date in the history of the space program. On that date, NASA announced contracts awarded to four aerospace companies to define demonstration missions to test the capabilities of cryogenic propellant depots. The contracts effectively created a design competition which would lead to the selection of a company to build an actual prototype depot. Cryogenic propellant depots are a critical component of our entire future space exploration and development effort.

For rockets and space vehicles, propellants usually take up 2/3 or more of their total mass. If a rocket puts a payload into an orbit from where the payload is intended to go further, such as to the Moon, that payload has to contain another smaller rocket and a final payload. Once in orbit, the first rocket’s upper stage is usually “out of gas” and since there are no gas stations in orbit right now, it becomes very expensive, useless space junk. If the “final” payload is expected to land on the Moon or Mars, it again has to have its own landing rocket and an even smaller final payload. This can be referred to as the Russian Nested Doll (Matryoshka) style architecture, with smaller rockets inside (or on top) of larger rockets. (A Russian Doll is a metaphor for an object with one or a series of similar objects inside it.) This is just the way things have had to be done since the start of the space age, since we have never had propellant depots in space. If a stage could be re-fueled in orbit, it could then be reused more than once.

When payloads are launched with cryogenic propellants, the propellants have to be loaded at the last minute since they start boiling off right away. A propellant depot does several very important things:

The typical propellant depot would contain liquid hydrogen and liquid oxygen, which respectively are about 430 and 300 degrees below zero Fahrenheit. To keep the propellant cold so it does not boil away, a depot can use four methods: 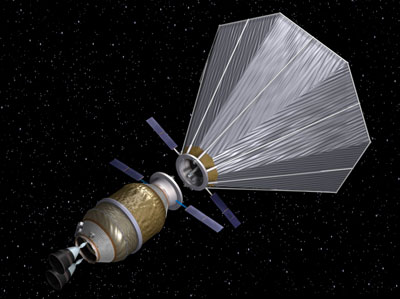 NASA will probably select one of the four company designs to create a prototype depot. The designs will surely incorporate at least three of the four methods listed above. A prototype depot design may be based on an existing upper stage with its tanks. The initial prototype, which would cost between 200 and 300 million dollars, might not use the cryo-cooler part if it can demonstrate high efficiency with the static parts of its cooling system. Some companies have sophisticated and detailed designs which have existed for several years. One design might be able to keep boil-off losses to 1/10 of 1 percent a day or only 3 percent a month. It would probably hold at least 30 tons of propellants. Current cryo-coolers need to be scaled up from ones designed to keep space telescope instruments cold. For long duration propellant storage, a large cryo-cooler would definitely be needed, but it would not use a huge amount of power. The Spitzer space telescope maintained an insulated supply of liquid helium for its instruments without a cryo-cooler for 66 months.

The same scenario can be used with depots placed at various destinations, such as geosynchronous orbit (GEO), L1, L2, or lunar or Mars orbit, where a depot would supply high performance cryogenic propellants to reach the Lunar or Martian surface. Depots can be sent to any destination orbit, since it is actually easier to keep the propellant cold away from the warm Earth’s infra-red radiation. The non-insulated or minimally insulated fuel tanks used by current spacecraft would lose all of their propellant during a trip to Mars, so only low performance (non-cryogenic) propellants have been used there to date. The depot can thus be considered as a component of a reusable in-space transport system that can do more than the sum of its parts.

Placing depots in remote destinations is the same as building gas stations in the mountains or the desert, far from the city. It allows you to conduct a full range of operations in the area of the depot with its secure propellant supply. If propellants can be created at the destinations from local materials, a local depot would provide a place to store them until they are needed. Since a depot can be a source of propulsion, energy, oxygen, and water, crew refuges may also be attached to remote depots as backup survival sites.

The cryogenic propellant depot is not only a critical part of the road beyond Low Earth Orbit (LEO), but would also be a boon for conducting routine operations in LEO. With the retirement of the Shuttle, the capacity to deliver large payloads to specific locations in LEO has been temporarily lost. Locations such as the space station or a propellant depot are usually thousands of miles from where a booster first enters orbit, and a booster, unlike the Shuttle, cannot move payloads around once in orbit.

A re-usable LEO to GEO space tug can remove the need for the expendable upper stages currently needed to reach GEO. Such a tug would not be possible without an orbital propellant depot where it can refuel.

A low or Zero Boil-Off (ZBO) depot can be considered to be a propellant accumulator, since multiple small tanker vehicles can add propellant until the supply is sufficient for large missions. The value of a propellant accumulator can be illustrated by its potential use had it been included in the now-cancelled Constellation architecture. In that architecture, an Ares V would have been launched with a full lunar stack similar to that carried by a Saturn V, minus the crew capsule. NASA would have then had about two weeks to launch a crew to the orbiting lunar stack on an Ares I before enough of the hydrogen fuel boiled off to turn the multi-billion dollar stack into orbiting space junk and wasting the entire Ares V launch. Even a medium-sized cryo-cooler docked with the lunar stack in orbit would have been sufficient to keep the fuel cold. With a depot, a lunar stack could be launched dry (meaning a much lighter stack is needed, thus requiring a smaller booster, or alternatively a larger stack with the same size booster). The stack would rendezvous with the depot, load the dry stage that takes the stack to the Moon with propellant, and the stack would then leave Low Earth Orbit.

The new commitment of NASA money to propellant depot design lends more credibility to the concept. There are no fundamental barriers to building depots — it is an idea which has existed on paper for decades but for which no development money has been available. The longtime lack of funding acted to reduce the credibility of the idea despite its inherent value and technical feasibility. In addition, the business-as-usual focus on expendable launchers fostered a general lack of interest. Funding for depots was suggested by the second Augustine Commission in 2009 and is supported by Dr. Robert Braun, NASA Chief Technologist, as part of NASA’s advanced technologies initiative.

This article as a permanent web page on the NSS website