The achievements of Orbital’s Antares/Cygnus Team at Orbital Science Corporation included the development, construction, launch and successful operation of the Antares booster and Cygnus spacecraft under NASA’s COTS/CRS program. CRS stands for Commercial Resupply Services. Orbital’s Headquarters are in Dulles, VA, and its Launch vehicle Program Offices are located in Chandler, AZ. 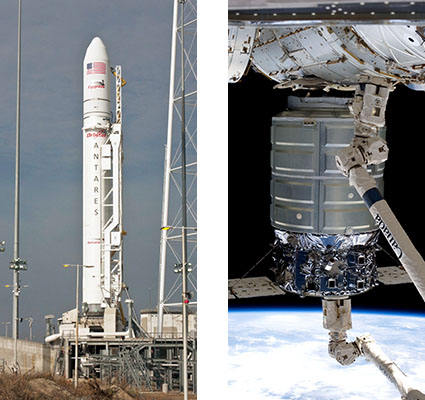 As a private company Orbital sucessfully designed, integrated, and built both a midsized Antares liquid-fuel launch vehicle (their first) and a Cygnus orbital tug with a cargo canister. This was done using off-the-shelf technology, modified where necessary, from an international network of suppliers. One demonstration and one commercial flight were accomplished in 2013 with rendezvous and docking with and delivery of materials to the Space Station both times. The spacecraft can deliver up to 2 metric tons of cargo to the Space Station. Essentially flawless performance of the Antares booster and the Cygnus cargo vehicle on all flights so far has demonstrated Orbital’s success in getting the design right the first time. Antares will also become available for cost effectively launching mid-sized payloads comparable to the retiring Delta-II. It is designed to place 5 metric tons into orbit, and all 3 flights have been successful. The Cygnus service and propulsion module can also be regarded as a prototype for a flexible design space tug to move large external cargo placed in orbit to the Space Station.

About the Space Pioneer Award:

The Space Pioneer Award consists of a silvery pewter Moon globe cast by the Baker Art Foundry in Placerville, California, from a sculpture originally created by Don Davis, the well-known space and astronomical artist. The globe, as shown at right, which represents multiple space mission destinations and goals, sits freely on a brass support with a wooden base and brass plaque, which are created by Michael Hall’s Studio Foundry of Driftwood, TX. There are several different categories under which the award is presented each year, starting in 1988. The NSS Awards Committee has been chaired by John Strickland since 2007 and its members seek prestigious award candidates on a continual basis.

About the ISDC: The International Space Development Conference (ISDC) is the annual conference of the National Space Society bringing together NSS leaders and members with leading managers, engineers, scientists, educators, and businessmen from civilian, military, commercial, entrepreneurial, and grassroots advocacy space sectors.