Pesquet Who? Let’s Give It Up For The Original Space Station Hunk, Jack Lousma 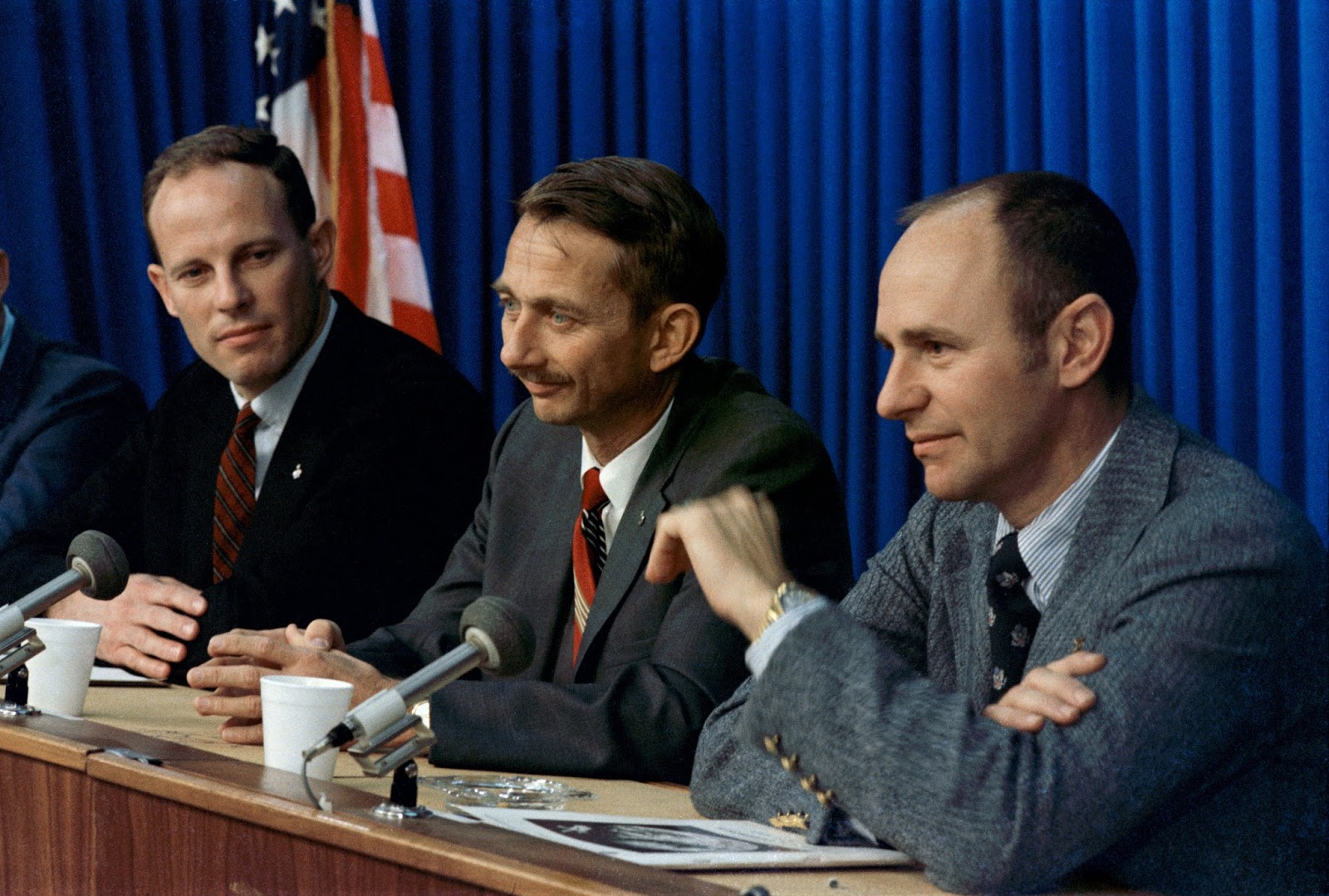 “Listen, I know it’s extremely difficult to fly with someone this handsome. Sorry, Owen and Al.” NASA photo, dated Jan. 19, 1972: “Prime crew members of the scheduled second Skylab mission are introduced to the media during a press conference in January 1972 at the Manned Spacecraft Center (MSC).
From left to right are astronauts Jack R. Lousma, pilot; Owen K. Garriott, science pilot, and Alan L. Bean, commander.”

Nearly five years before ESA’s Thomas Pesquet even existed, Jack R. Lousma was NASA’s most promising entry in the “Sassiest Space Station Astronaut Awards,” 1973. Selected to the astronaut corps in 1966, he made his first flight on 1973’s Skylab 3 mission, becoming one of nine astronauts to live on the United States’ mighty first fortress in space, all while being a total hunk, and a very nice fellow to boot. In all seriousness, Marine Col. Lousma’s career was full of highlights, including 1982’s STS-3, the only space shuttle mission to be landed at White Sands (this landing also tested the shuttle’s autoland capability, but that’s another story entirely). This was the third “test” space shuttle mission, which he commanded alongside pilot Gordon Fullerton.

A cool side note: at one point he was tapped to pilot STS-2A, which was meant to attach a Teleoperator Retrieval System (TRS) to Skylab. This mission was meant to take place circa late 1979, with Apollo 13/ALT’s Fred Haise as commander. Lousma would have maneuvered the bus-sized TRS to the ailing space station remotely; if successful the system would’ve reboosted Skylab’s orbit, allowing the station to be once again useful and inhabited by crews for 30- to 90-day-long missions in future years. However, this idea was thwarted by the fact that the shuttle was far from flight-ready by that time, and Skylab’s orbit was decaying more quickly than expected due to high solar activity. The space station, estimated to reenter around 1980-81, fell back to Earth in July 1979. More about this TRS concept can be found here and here. 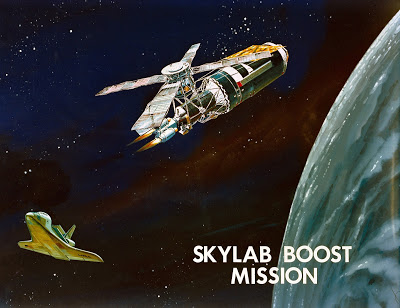 “Hey girl, I saved Skylab.” NASA artist’s rendering, 1978: “A drawing of a Teleoperator Retrieval System (TRS) which is being developed by NASA for use beginning in late 1979. This spacecraft is illustrated being used to re-boost the Skylab space station to a higher orbit.”

But anyway, here are some pictures of everybody’s favorite space station hunk. I might be busy for a while due to real life, so I wanted to leave you all with a Serious Scientific Post for a while. Enjoy! (Bracing myself for “you’re sexist/reverse sexist/Lousma-ist” comments.) 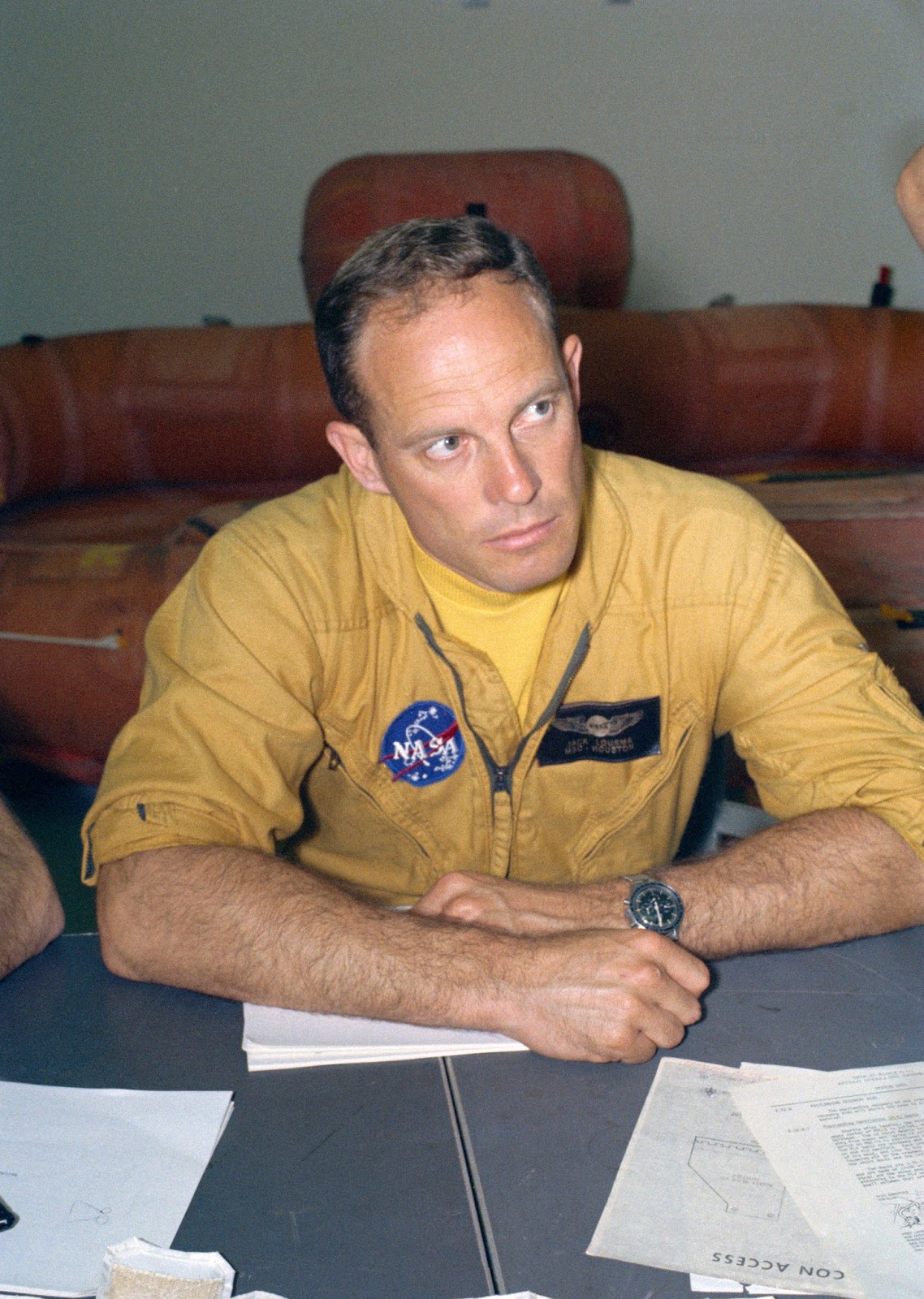 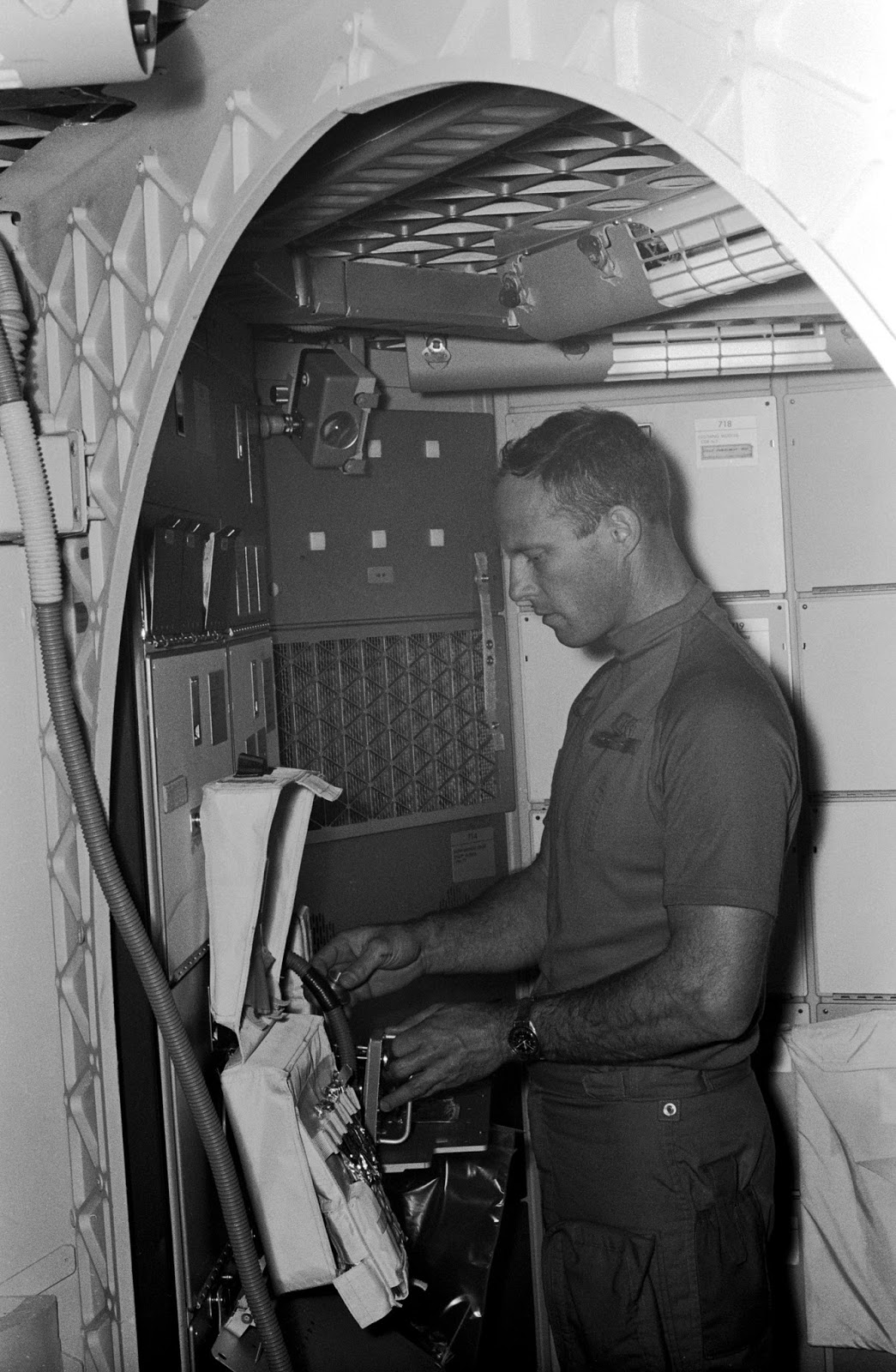 “Hey girl, gotta get these medicines ready for my mission.” NASA photo, June 16, 1973: “Astronaut Jack R. Lousma, Skylab 3 pilot, reaches into a medical kit, part of the Inflight Medical Support System (IMSS), during training for the second manned Skylab Earth-orbital mission. This activity took place in the OWS trainer in the Mission Simulation and Training Facility at the Johnson Space Center (JSC).” 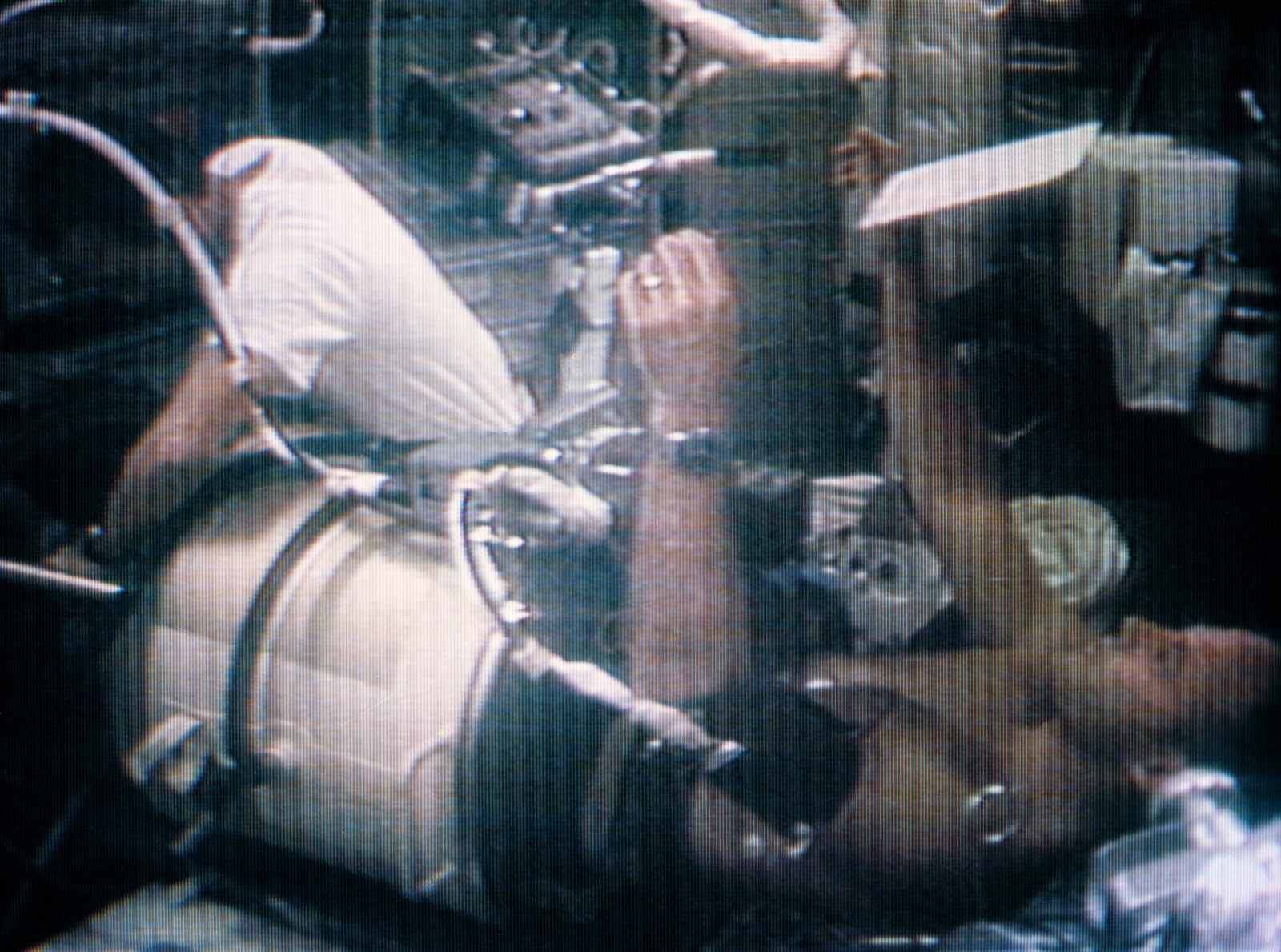 “Hey girl, it’s me, shirtless. You’re all welcome.” NASA photo, Aug. 7, 1973: “A medium close-up view of astronaut Jack R. Lousma, Skylab 3 pilot, in the Lower Body Negative Pressure Device (LBNPD), as astronaut Alan L. Bean, commander, works around the leg band area. This portion of the LBNPD MO-92 experiment was televised on Aug. 7, 1973. The LBNPD experiment is to provide information concerning the time course of cardiovascular adaptation during flight, and to provide in-flight data for predicting the degree of orthostatic intolerence and impairment of physical capacity to be expected upon returning to Earth environment. The bicycle ergometer is in the background, partially visible behind Bean.” 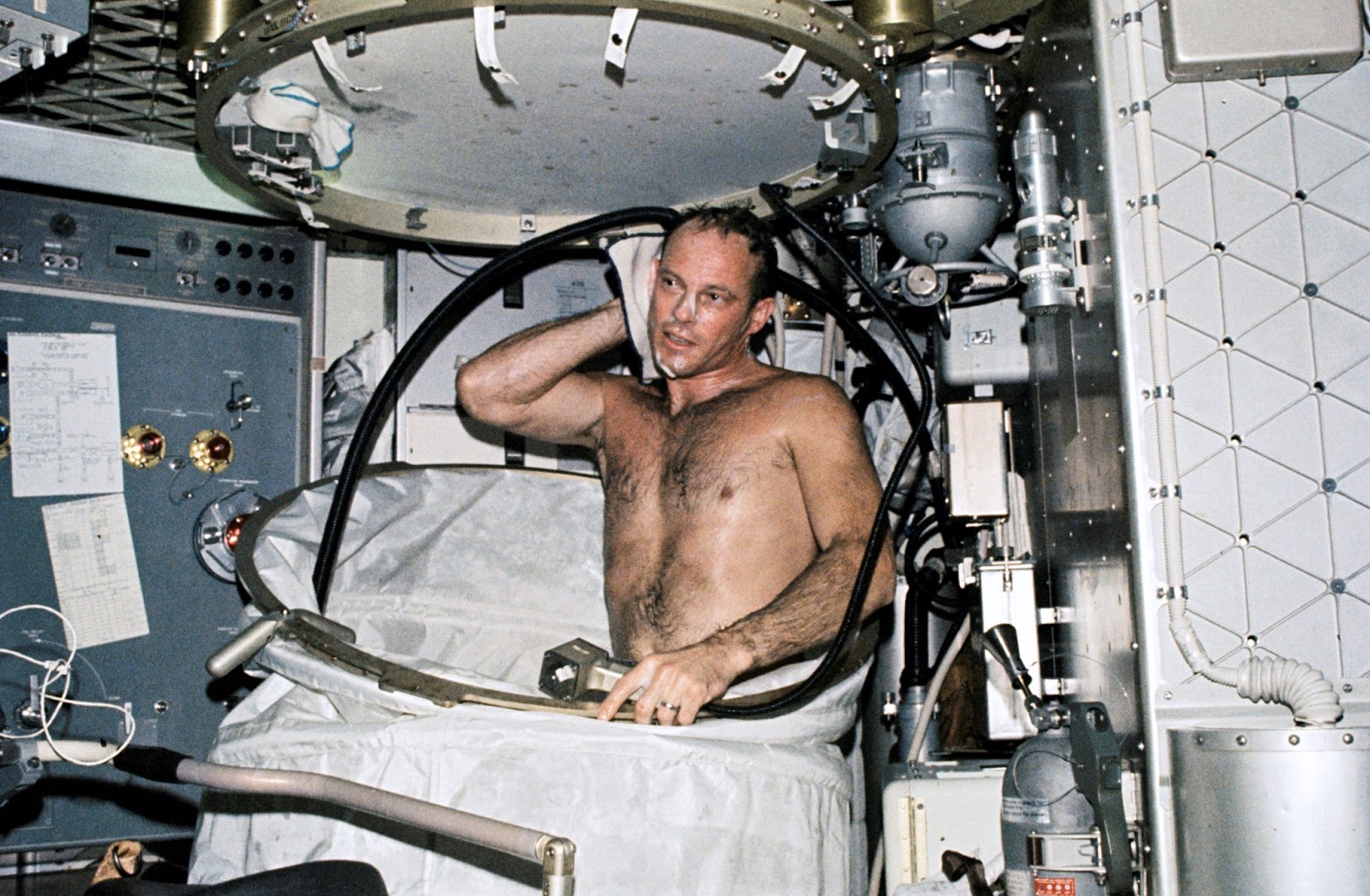 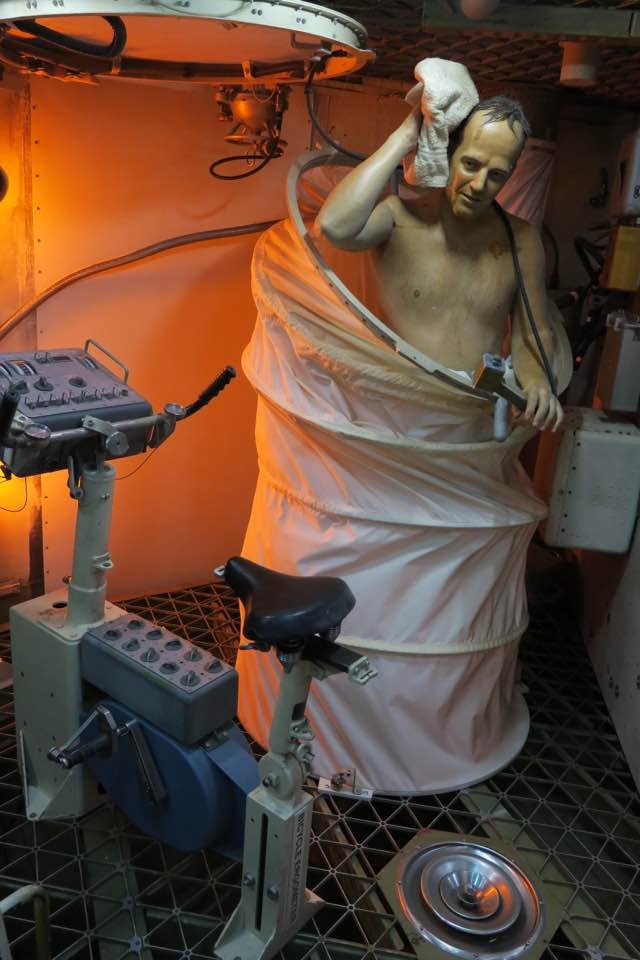 …And here’s what might be the greatest photo on this entire blog. “Hey girl. This moment was so iconic, they made a wax figure out of it.” From the Skylab exhibit at Space Center Houston. Photo by Mark Usciak (I own nothing)